A few weeks ago, Paul and I traveled all the way to the other side of Singapore... to eat. Quie a distance that despite my work area being at the central district, it still took me more than an hour by public transportation to get to our destination. On the way there, I was really hoping (and praying) that our meal will be worth it! 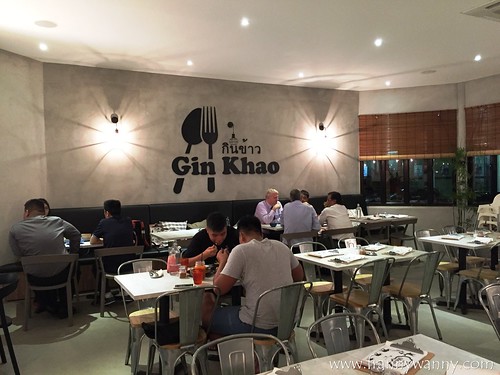 Our goal was to check out this relatively new restaurant called Gin Khao located right at East Coast Park. We both love Thai food so we're really excited about this! I love how spacious the restaurant was! How I wish it would expand and have more branches closer to the city as this would definitely be a good place to dine in with friends or for private functions too. 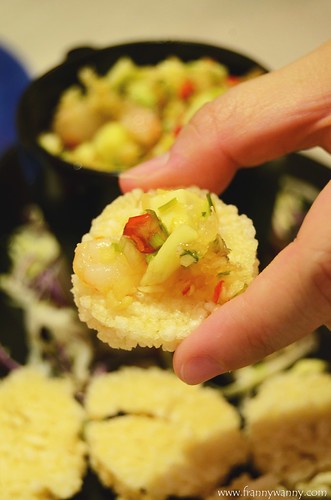 We began with the Prawn and Green Mango Relish (S$7.80) which, I have to say, quickly became my favorite! I can't get over the perfect blend of tangy and spicy flavor as well as a mix of texture from crunchy to meaty. It was very refreshing and surely made a great start to our meal. So far, so good! 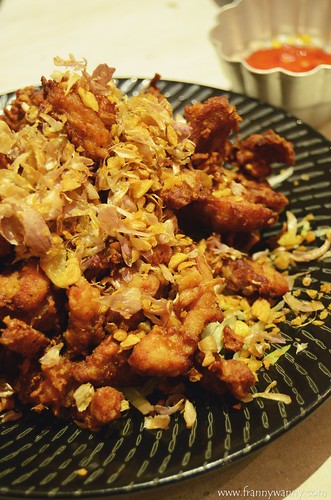 To pair with the healthy starter, we had the Gai Tod Had Yai (S$7.80) which is a plate of deep fried chicken cubes cooked in "Hat Yai" style. I quick research on Google told me that Had Yai or Hat Yai is actually a province in southern Thailand near the Malaysian border. How interesting! I love the strong garlicky flavor of the chicken although I have to admit that I'm really not crazy about deep-fried dishes so I just had a few bites of this. 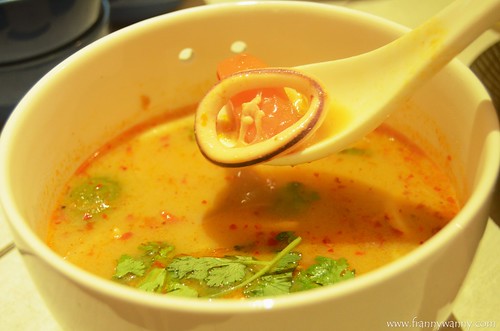 Of course, what's a Thai meal without having Tom Yum right? As much as I shy away from spicy food, this is one of those that I couldn't resist even if I know it will burn my tongue badly and cause an ugly scene of profuse sweating and runny nose (okay, I think that was a wee bit too much info hehe). The main point is, I love love love Tom Yum Soup! We had the Tom Yum Talay (S$12.80) which was a fiery hot bowl of seafood tom yum soup cooked with coconut milk making it really yummy, creamy yet with a strong spicy kick. 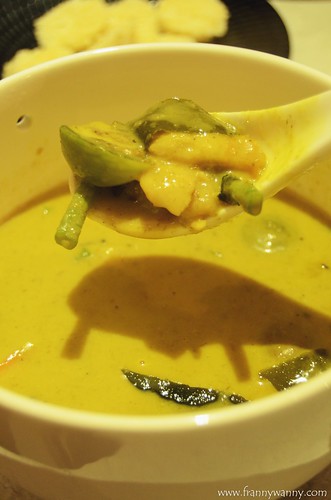 Up next was another Thai favorite -- Green Curry Chicken! The Kaeng Khiew Wan Gai (S$12.80) was listed under "Soup" and I have to admit that it took me a while to locate it in the menu as I was looking under "Mains" and when I couldn't find it there, I looked for the "Curry" section which wasn't there. This one was really yummy! At this point, I urge you to order a cup of rice as there's really no other way to enjoy green curry but with rice. The chicken was very tender and the curry flavor was very balanced. I'm giving this my two thumbs up. 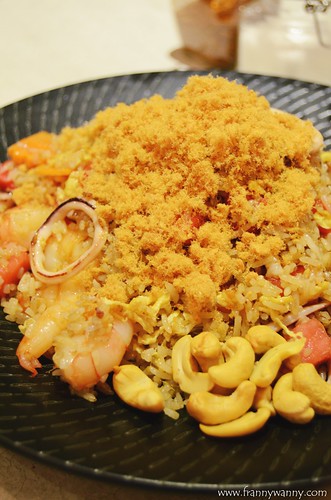 Speaking of rice, we decided to go a little fancy and tried something different. The Khao Pat Dtaeng Moe (S$11.80) is a Thai-style fried rice cooked with...*make a guess*...watermelon! I couldn't believe my eyes too when I read it on the menu as I'm used to pineapple fried rice in Thai restaurants but hey, change is good! What do you know, it was delicious! I enjoyed the savory fried rice and the sudden burst of sweet watermelon juice. I love that they were very generous with the seafood and the cashew nuts made a great addition too. 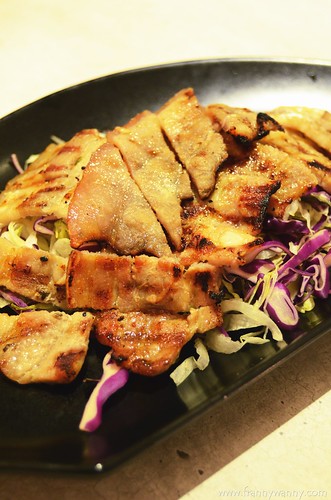 So far, we've been greatly impressed by 5 out of 6 dishes and we still have a lot more to go. For our meat dish, we had the Moo Yang (S$12.80) which was a simple plate of grilled pork belly. It was just a-okay for me. 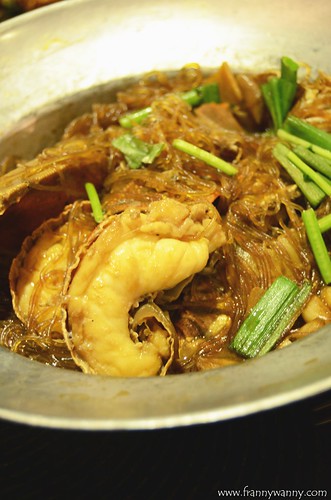 I always believe in the saying "saving the best for last." For this particular dinner, we had the Kang Ob Woon Sen (S$16.80) which have 4 individual pieces of juicy crayfish sitting on top of a bed of al dente glass noodles and simmered in Thai garlic and pepper sauce. The flavor was just so rich and addicting that you'll definitely want more than one serving. I have to say that the price was very reasonable too. For anything with crayfish, I was expecting this to be priced more than S$20 at the very least. 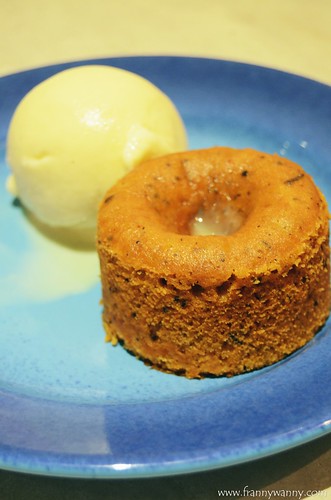 For dessert, we had three of Gin Khao's specialties. First was the Molten Lava Thai Tea Cake (S$8.80). I have to admit that this was the one that got me excited to try Gin Khao. I love Thai Tea and I love love love molten lava cake so this one was just the perfect combination. I have to admit though that I find the flavor to be a bit on the weak side. I still want that strong Thai tea flavor in every bite. 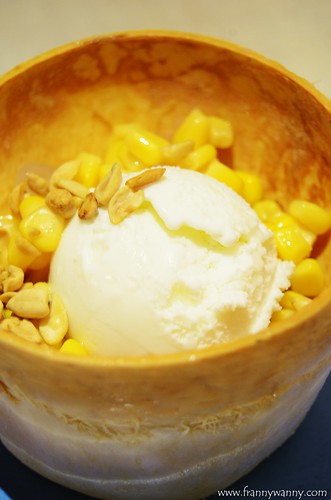 As for Paul, he loves Coconut Ice Creams and so he couldn't resist trying upon learning that they have Coconut Gelato in Husk (S$7.80). True to its form, it's served with roasted peanuts, corn kernels and atap seed. I had a small scoop and I liked it! I'd say it could rival that of our favorite coconut ice cream stall to date. 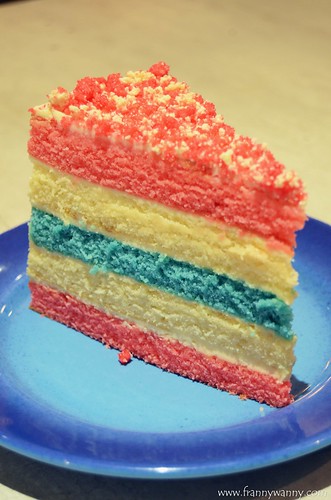 Lastly, we were served a slice of this interesting "rainbow cake" which came in the colors of Thailand's flag. This was the Cake of the Month (S$7.80) last month and I hope they can keep it as it adds more novelty and "Thai-feel" to the dessert line-up.

What a hearty dinner! I know I shouldn't be eating that much but hey, we traveled across the country so we allowed ourselves to feast. We enjoyed almost every dish and it's just so sad that Gin Khao have to be so far to be enjoyed frequently. However, we surely will be back as this is a good reason to visit the East once in a while.