Timbre+ (Timbre Plus) at One-North in Singapore

- May 24, 2016
As we all know, hawker centers has been a part of Singapore's foodie life since the 1980s and this is where we've grown to love our Chicken Rice, Char Kuay Teow, Chili Crab and more. No visit to Singapore will ever be complete without dining at any hawker centers and likewise, every Singaporeans and residents have their own favorite hawker centers and stalls that they frequent on a regular basis. In Tagalog, we'd say, we have our own suking tindahan. I have my favorite mixed veg stall who knows me by face (sadly, not by name yet) and this is where I would also get my staple 1 meat/fish + 2 veggies + curry sauce on my rice from. 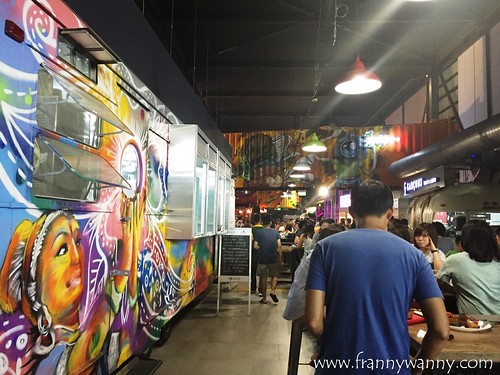 Times are changing and there's that conscious effort to preserve the the Hawker Heritage. That said, we've seen a couple of modernized hawker centers opening all over town. What makes these different is it features up-and-coming food establishments that serves a more varied modern and international fare. It started with Salut in Bukit Merah followed by my favorite Essen at Duxton in Tanjong Pagar and recently, Paul and I joined our friends to check out Timbre+ (Timbre Plus) at One-North. If you noticed, these modern hawker centers are situated closer to offices giving corporate workers more dining options for lunch that's still within their daily meal budget. 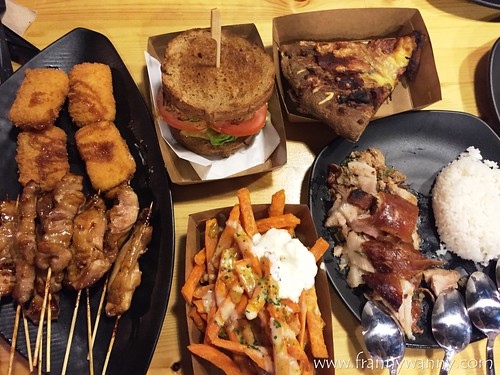 On weekends, Timbre+ turns into a fun, happening hang-out place for friends and families who are perhaps living within the vicinity. Paul and I got there a little past 7 and the place was jam-packed! Luckily though, our favorite double-dating couple N and T were able to get there ahead of us and they got a table inside Iskina Cebu. While we're all eyeing to have our Cebu lechon, the good thing is you can also buy from the other stalls and the store owners are pretty cool about it. They're pretty much good friends with one another so it's really nice to see how they support each other's businesses. 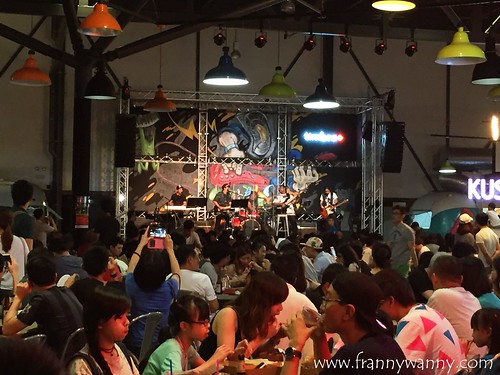 There are long queues in almost all stalls so I quickly searched for Portico Platos as I really want to try their Seafood Paella. I waited for about 8 minutes and just when I was 3 people away from the counter, the staff announced that the paella was all sold out. Awww man! My heart sank as I quickly left the queue. Not to worry though as I headed to Teppei Daidokoro which was next in my list. 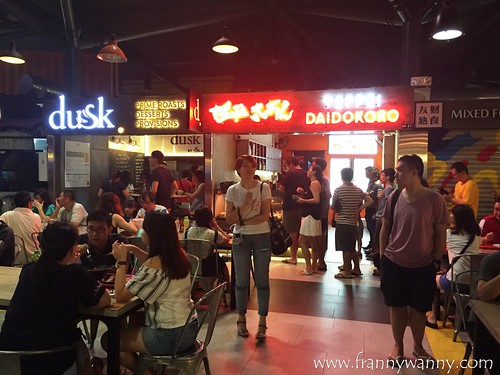 Since we just got back from Japan then, Paul and I were nursing this bad Japan hangover so we were eating Japanese food for almost a week, I think. I've been seeing Teppei Daidokoro's mouthwatering Chirashi Don on Instagram but since I want to order something that can be shared with the group, I went for an assortment of Yakitori sticks and some deep-fried Scallop Cream Croquettes. 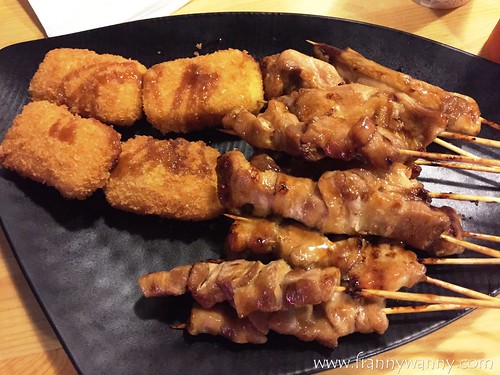 There are a lot of options to choose from for the Yakitori -- I went for the Pork Belly (S$1.40), Chicken with Leeks (S$1.60) and their best-seller, grilled Chicken (S$1.20). I was also so curious with the Salmon Cream Croquette (S$1.80) so I got 4 to share. The yakitori sticks were delicious and my favorite was the regular grilled Chicken. However, the Salmon Cream Croquette was a major disappointment. It was creamy alright but extremely gooey and a bit bland that we couldn't really find a single bit of scallop meat. *sigh* I should have went for more Yakitori sticks instead. 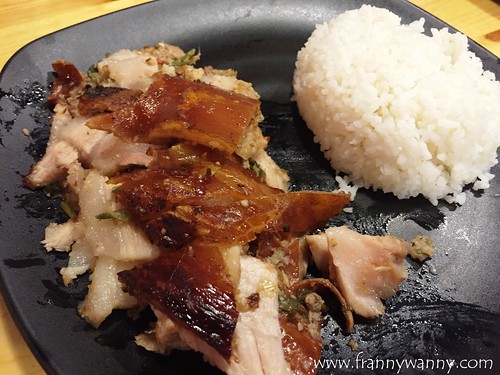 Paul and N ordered plates of regular Cebuano Lechon (S$10) with Rice from Iskina Cebu. What can I say? It's still one of the best in town! I love how the meat has a nice salty flavor and the skin stayed so crunchy even after we left it out a bit too long with all out chit-chatting and of course, photo taking. They have maintained the same price as with their Paya Lebar branch. This is definitely one stall you have to visit at Timbre+.

We also got to try a couple of dishes from The World is Flat by Tanuki Raw. I was so happy because I've been eyeing Tanuki Raw at Somerset for sometime now and I finally was able to enjoy some of their food here at Timbre+. We had the Truffle Sweet Potato Fries which was served with truffle aioli. I initially thought that sweet potato fries may not go well with aioli but I was proven wrong. This was the bomb! It would have been better if the fries were made more crispy but hey, who's complaining? We also tried Salted Egg Fried Chicken Sandwich (S$12) which was yummy. I'm definitely going back to try more!

Lastly, T patiently queued up at Dancing Crab Shack for what else?! A basket of Dancing Crab's Seafood Boil which is filled with Sri Lankan Crab, Prawns, Clams, Sausage, Potatoes and Corn. I was too lazy to get my hands oily that evening so I stuck to the ones I can easily pluck out with my fork namely the sausage and potatoes. The way it was presented though reminds me of that yummy Seafood Boil that we had at Clawdaddy's back home. However, Paul and I brought home some of the leftover crab which I later flaked and turned into a plate of Crabmeat Fried Rice and that when I was able to enjoy the delicious garlicky flavor of the crab. Yum yum!

Anyway, so Paul and I saw Chris Calledo, the man behind Iskina Cebu and I told him about my heartbreaking experience at Portico Platos where I was really looking forward to the paella. Suddenly, Chris came back with Chef Nixon who brought over two of his famous tapas to make up for the paella. Oh my goodness! How embarrassing! 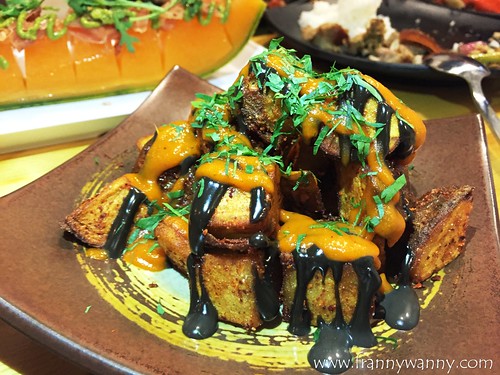 Chef Nixon is such a nice guy and he really didn't had to treat us since I'm not giving up till I get to try his Seafood Paella. Anyway, we got to try the Patatas Bravas which is an interesting way of serving the usual fried potato. Cut into chunks, deep-fried and flavored with spices, it's served with a generous portion of black garlic mayo which I suspect is made of squid ink. It was really yummy! I loved it so much that I began raving about it on Instagram which later on made its way to Straits Times. 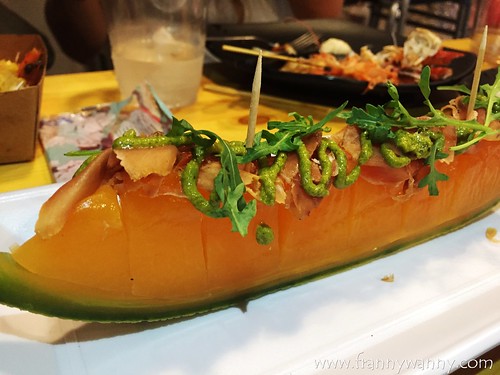 We also got to try Portico Platos' Compression of Rock Melon with Jamon Serrano (S$10). This is a unique way of presenting the traditional Melon wrapped in Prosciutto found in most Italian restaurants. I find this to be very refreshing and a great way to end our meal with. It has a nice sweet, salty and juicy flavor that you'd get in every bite.

I love Timbre+ and I'm so glad that it's really close to home making it easy for us to head there anytime. I do recommend for you to go early though to be able to order more and to score good seats too. Catch the live band that plays every Monday, Wednesday till Saturday. During the night that we were there, they were playing all 70s-00s songs which we can totally sing along too. Okay, that surely gave away our ages. :P

One last thing that I love about Timbre+ is how they encourage people to clean up after eating. They have this huge Tray Deposit station where you get a dollar back for every tray that you return. Isn't that cool?

Head over to Timbre+ located at 73A Ayer Rajah Crescent, Singapore 139957. The closest MRT is One-North (Yellow Line) where you just have to cross the stress to the empty lot with colorful containers. Timbre+ (Timbre Plus) is open Mondays to Saturdays from 6am to 12mn (M-Th) / 1am (Fri-Sat). Note that it's closed on Sundays.
ayer rajah crescent hawker hawker heritage iskina cebu modern hawker one-north portico platos singapore tanuki raw teppei daidokoro the world is flat timbre plus timbre+