- July 28, 2016
As we all know, Singapore is a very small country. With its land area spanning no more than 719km2 and a population of about 5 million people, what not a lot of people know is that Asia's "Little Red Dot" has a very rich cultural background which is brought about by the different races and nationalities that you can find here. Given that, expect to entice your taste buds to a myriad of flavors and cuisines available locally.

Correct me if I'm wrong but I feel that one of the most underrated cuisines here in Singapore is the Peranakan, otherwise known as Nonya, cuisine. Take a quick look at the hawker centers and you'll see a mix of Teochew, Hokkien, Cantonese, Indian, Malay, Western and even some Thai and Vietnamese dishes readily available. Save for stalls selling Laksa, rarely do we get to encounter any other stalls that specialize in purely Peranakan food. This is one thing that I wish more of the newer generation hawkers and restaurateurs would consider as Peranakan cuisine plays a big role in Singapore's history as the Peranakans are the first immigrants who came to Singapore and eventually called this place home.

I'm really thankful for my colleagues T and N who introduced me to some of their favorite Peranakan dishes. From N's homemade kuehs to that one fun lunch where we got to enjoy some buah keluak, ngoh hiang, chap chye and udang masak assam. After the meal, I realized how similar Peranakan cooking is to the traditional Filipino dishes. For one thing, it's very saucy and being so flavorful too, you definitely won't be able to resist having rice. Secondly, it seems like most of the dishes require some time to cook in order to bring out the flavor and I really appreciate that. Somehow, it gives me that feeling that each dish is made with so much effort and love.

So, when I got an invite to check out Oscar's latest promotion which turns the spotlight on Peranakan cooking, the first thing that entered my mind was.. "FINALLY!" Maybe soon, Peranakan cuisine will start to take center stage where it rightfully belongs.

Let me give you a quick tour around the buffet area and what are the dishes that you definitely have to try as well: 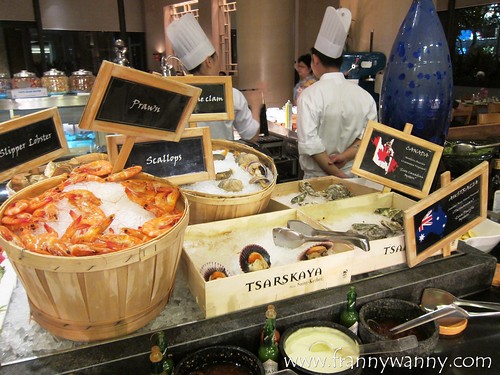 Start your meal with a plate of fresh seafood! They got two types of oysters which the Chef would gladly shuck right in front of you and the yummiest prawns, lobster, clams and scallops too. 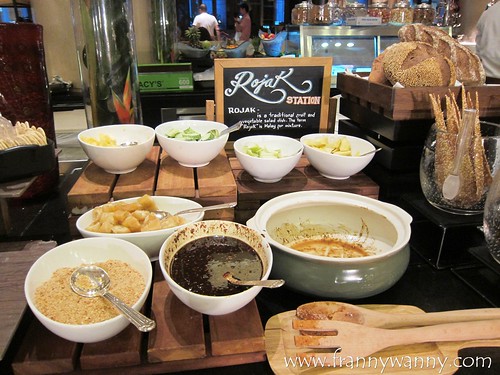 If you want something more local, then move over to the Rojak corner where you can make your own rojak. Paul and I love rojak and we like it with lots of pineapple chunks. Finally, we got our wish and our version was very sweet and sour with a bit of spicy kick just the way we love it. 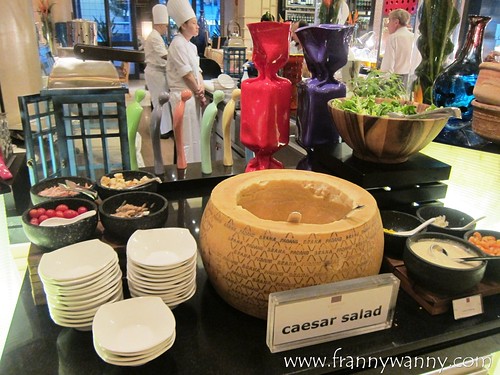 Salad lovers will enjoy tossing their own creation at the Caesar Salad station. I was so impressed to see this parmesan cheese bowl being used instead of a regular wooden mixing bowl. 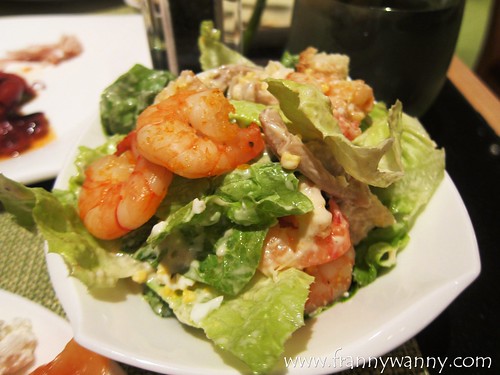 Check out my very own Shrimp Caesar Salad which we so yummy!

If you noticed, there seems to have a lot of DIY stations and this is what we love about Oscar's buffet. It allows you to customize your food based on your liking and at the same time allowing you to go crazy and experiment with your food. This is perhaps the only time in your life wherein you're allowed to "play" with your food. Make the most of it! 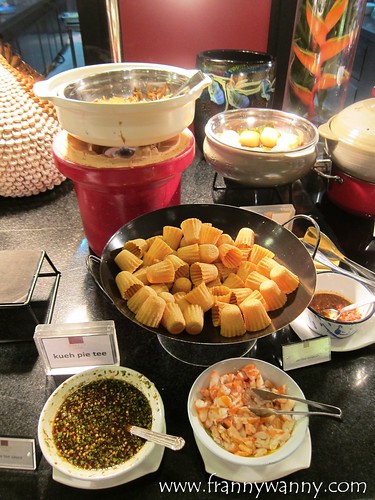 That said, there's also the Kueh Pie Tee station where you can fill up your own cups depending on how you like it. 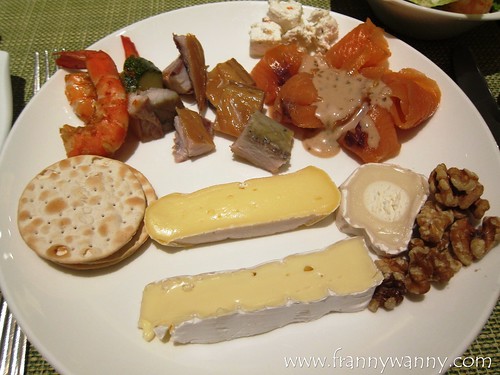 That was just the starters section and look at my first plate! I love the two types of smoked fishes -- mackerel and salmon which was so delicious! Of course, I gotta start my meal with cheese and crackers too. 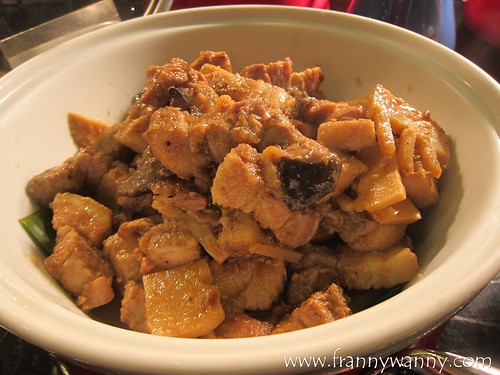 Moving on to the main dishes, I focused mostly on the Peranakan entrees since these are available only for a limited time. I was a bit sad that they didn't had the Ayam Buah Keluak that evening but luckily I chanced upon the Chef replenishing this claypot filled with Babi Pongteh. It's a stewed pork dish with fermented soya bean and bamboo shoots. The taste profile is closely similar to the famous adobo and we both loved it! 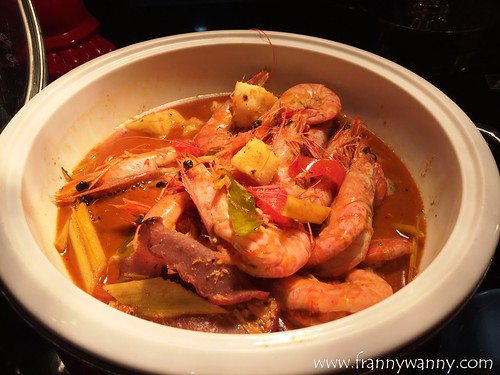 I also tried the Udang Masak Assam which has been a favorite of mine since I first tried it with my colleagues a couple of months back. What's there not to love? Huge prawns simmered in rich tamarind broth and served with pineapple chunks and chili. As for this, it's like the Thai Tom Yum meets the Filipino Sinigang where both are definitely comfort dishes and this is one that I wouldn't mind having on a regular basis. Okay, maybe this and the buah keluak... 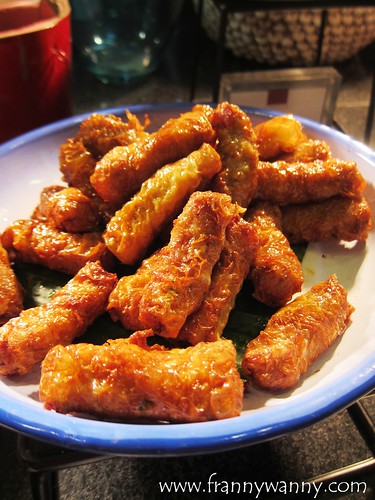 They also have Chicken Ngoh Hiang which was very delightful to munch on. I wonder though how come they opted to use chicken instead of pork this time around. It was pretty good but I think I prefer the pork version more. 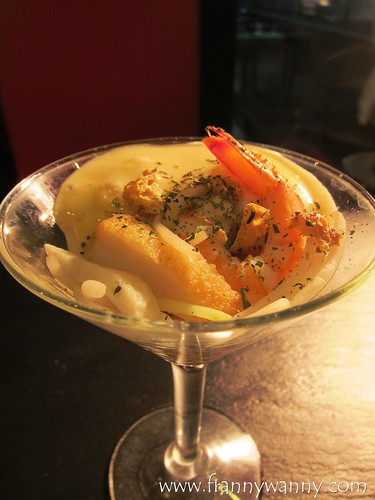 The highlight of the buffet though was the special creation of fellow blogger Maureen or more popularly known as Miss Tam Chiak. For Oscar's Peranakan buffet, Maureen came up with this Dry Laksa Pasta with Spicy Coconut Espuma Foam. It's very pretty but wait till you take your first bite and you'll love the spot on laksa flavor, the springy noodles and the interesting texture that comes from the foam. Eat it quick though as the foam disintegrates quickly. It's served in a pretty cocktail glass which won't give you much but you may go back for more should one serving is not enough (and trust me, it's too good to stop at one!).

Now it's time for dessert! 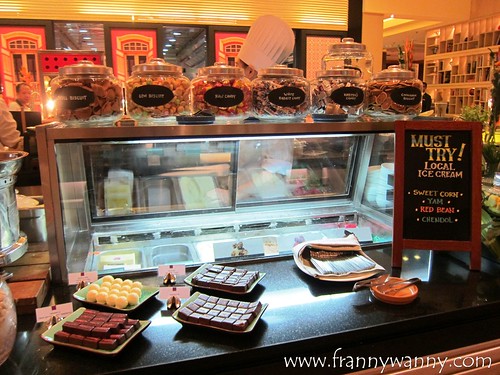 While Paul helped himself to scoops of Oscar's homemade local ice cream... 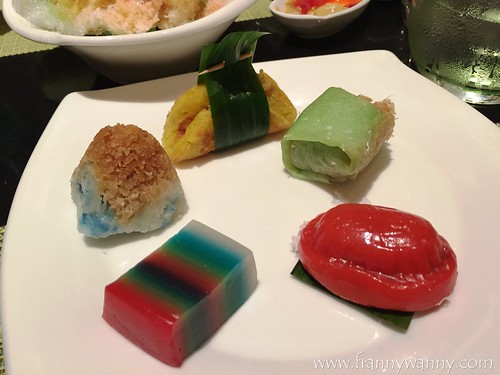 ... I filled my plate with an assortment of Nonya kuehs which are similar to what N would make. I got to admit that some were just too coconut-y or too sweet for my taste but I particularly loved the Ang Ku Kueh (red glutinous rice cake filled with sweet chopped peanuts) and the Rainbow Kueh which I enjoyed eating one layer at a time. Paul loved the Kueh Dadar which is the one with thin green crepe filled with super sweet coconut filling. It was his first time to try it and let's just say, it was love at first bite. 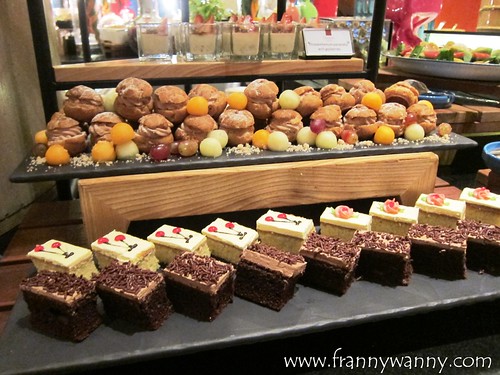 There were also a lot of cakes and pastries available some of which looked so traditional which will surely give a very nostalgic feeling. 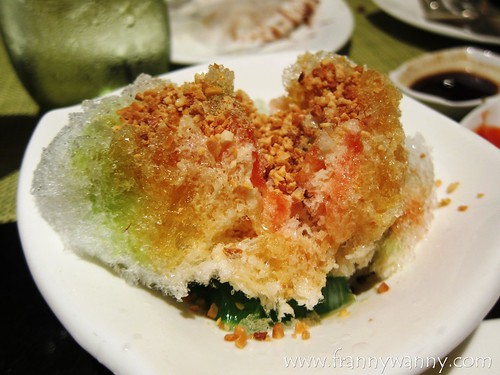 I also tried to make my own Ice Kachang which was fun but seeing that mine was no where near perfect, I definitely salute all the ice kachang sellers and makers who can whip up a delicious bowl of ice kachang with perhaps their eyes closed. It's not as easy as it looks, trust me.

I was so happy to be able to have a delicious Peranakan dinner at Oscar's and the best part was, Paul was there to enjoy it with me. The buffet selections were not a lot but I love how each dish was of great quality and it seems like each item in the buffet was carefully chosen in order to suit every diner's discriminating taste.

This buffet promotion will run until the end of August so I highly recommend for all of you to go and enjoy what Peranakan cuisine has to offer. As a special treat, simply quote "Laksa" when you're making a lunch reservation (Mon-Sat only) to enjoy the buffet for only S$45++ and "Achar" for dinner reservations (Mon-Thu only) to get the special rate of S$55++.