- January 18, 2017
It has been a very happening and truly exciting two months for both Paul and I. Starting with our trip back to Manila to celebrate the holidays with our families then flying back to Singapore 11 days after to go back to work and once again, back to Manila to witness the beautiful wedding of my Achi Marie. Paul and I knew that all these back and forths will take a toll on our body so we made sure to make our flights home as stress-free as possible. 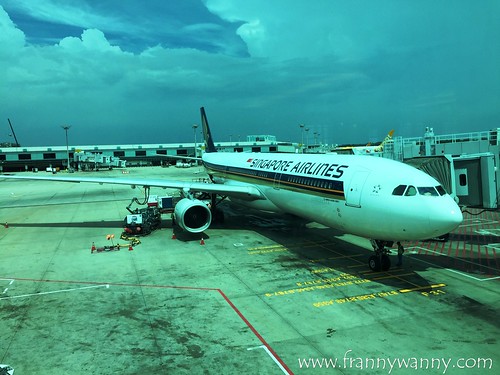 I believe that the airline plays a HUGE role on your over-all well-being when travelling. Don't get me wrong, I still fly budget especially for short trips home but I got to admit that I get really excited every single time I fly via Singapore Airlines. Apart from having more luggage allowance, a hot and delicious meal on board, I look forward to the wide entertainment library consisting of the latest movies, TV shows, music and even several radio channels. Time literally flies when you're on Singapore Airlines as you'll find yourself busy with all these things to watch and listen to.

Now let us focus on the food. I really got to give Singapore Airlines props for regularly updating their menu at least on a monthly basis. Since we flew all throughout December and January, we were so lucky to try a several dishes in all 4 different flights.

For our first leg, we took the evening trip and SQ was having an ongoing Teochew Festival onboard which I was so excited to try. There was only one option though for Economy Class which was the Sa Cha Pork which is a delicious dish of stir-fried sliced pork with dried brill fish sauce and served with piping hot steamed rice and veggies. Normally, Paul and I would order different meals to be able to try both options but we both wanted the Teochew option this time. After all, this promotion doesn't happen regularly. 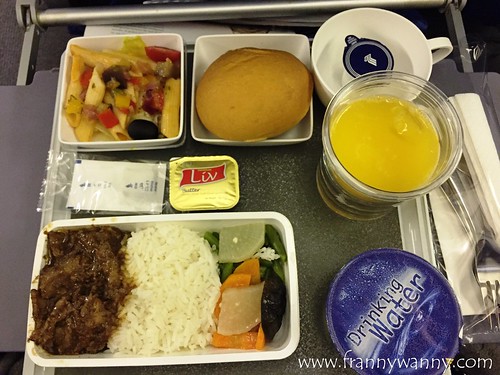 I don't think I've had Teochew food or at least Sa Cha Pork before. It was really good! The flavor was very familiar and truly comforting. I wouldn't mind having more of this if given a chance. Would anyone know of any restaurant serving this? The sauce has a distinct taste giving the dish a very traditional Chinese feel. It's not your usual oyster sauce or soy sauce-based gravy though but it sure has a lot of herbs and spices mixed into it.

Together with the main dish, we had Pasta and Eggplant Caponata and Ice Cream for dessert. I love how they are now serving Cornetto Ice Cream on board. Yay!

After our long holiday break, we had to fly back to Singapore shortly to go back to work. Paul and I love pre-ordering our meals and so we requested for special meals for this leg. To be honest, I somehow regretted doing so after seeing what was on the menu that day: Baby Shrimp with Coleslaw Salad, Buttered Linguine Pasta or Beef Kaldereta, Ice Cream. That just sounded soooo good! 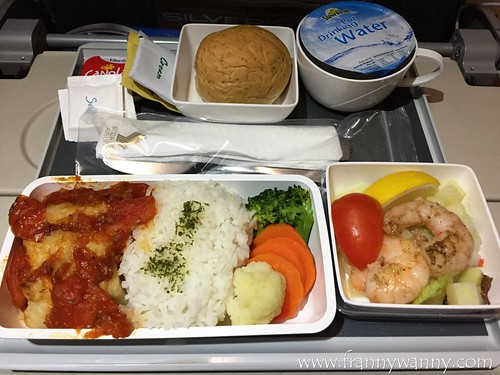 Oh well.. Anyway, I got the Seafood Meal which had Shrimp Cocktail Salad, Baked Dory with White Rice and Ice Cream!  Not bad however I'm not a fan of Dory Fillets so I was somehow wishing I got the regular choice instead. 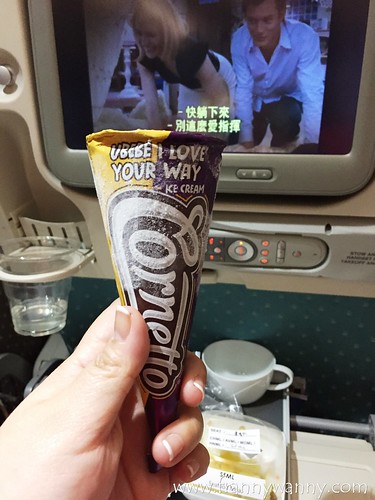 What I loved though was the Cornetto Ube Ice Cream. I love anything that's ube (purple yam) - flavored and this one had cheese flavored ice cream combined with it. Yes, Ube and Keso, totally match made in foodie heaven. 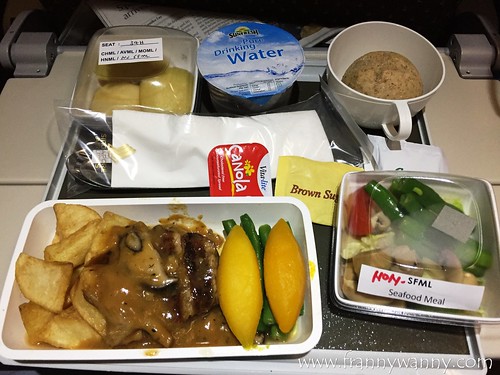 Paul, on the other hand, went for the Non-Seafood Meal and he was very pleased with his cut of steak with buttered potato and veggies. The salad, according to him, was pretty ho-hum as it was just a simple veggie salad with clearly no seafood in it. Haha! 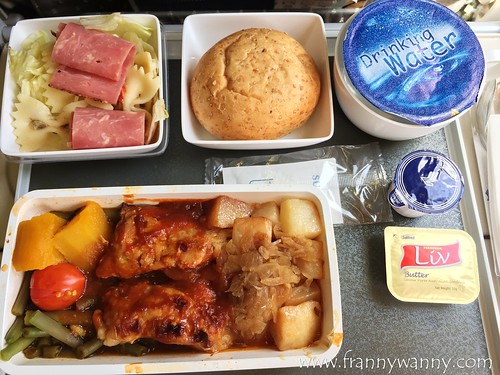 Once again, we flew back after a few days to celebrate Achie Marie's BIG day. So envious of Paul's yummy steak meal during the previous flight, we both requested for a Non-Seafood Meal only to our disappointment, we both had Stir-Fried Chicken with Potatoes instead. Can you just imagine how heartbroken we both were upon seeing this? Not wanting to sound ungrateful for the hard work that the Chef has put into it but we were both daydreaming about that piece of steak for days.

To be fair, the Non-Seafood Meal was pretty good and I still ate all of the chicken fillet but leaving the veggies and potatoes behind. We also had a heavy meal at the lounge prior to our flight so we were half-full before taking off. 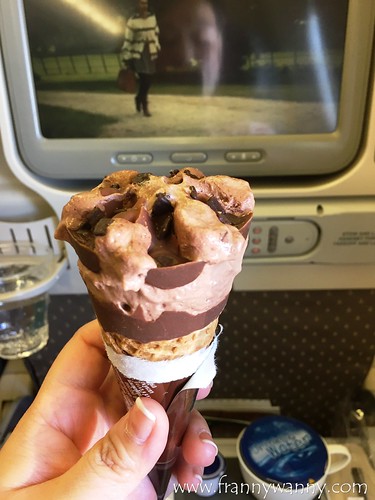 A quick look at the regular menu and once again, both options sounded so good! Thai Spiced Salad, Sauteed Linguine or Sesame Chicken in Lemon Sauce and Ice Cream. This time around, we got Chocolate Cornetto Ice Cream which was also yummy!

Learning from the past two flights, we decided to just go with the regular menu this time around. This will be our last SQ flight as the next one will be months after so we just wanted to enjoy whatever was available that evening. 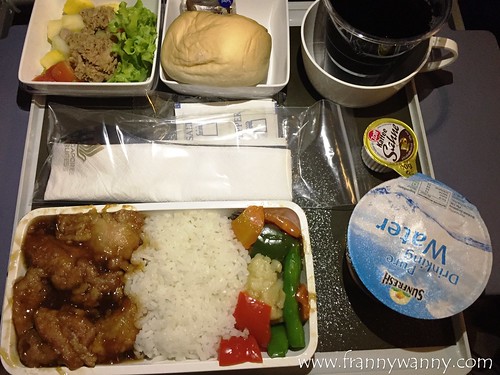 We had Green Mango and Vegetable Salad with Tuna, Wok-fried Chicken in Sesame Oil with Ginger (for me) and Braised Beef in Red Wine Rosemary Sauce (for Paul) and lastly, Cornetto Ice Cream for dessert!

My Wok-Fried Chicken in Sesame Oil and Ginger was just a-okay. Somehow I was expecting it to be closely similar to a Hainanese Chicken but instead it was a very savory, saucy chicken dish with steamed rice and veggies. Not bad but not out of this world amazing though. The salad was also pretty average as I found the green mangoes to be way too sour and the tuna was just the kind that came out of a can. 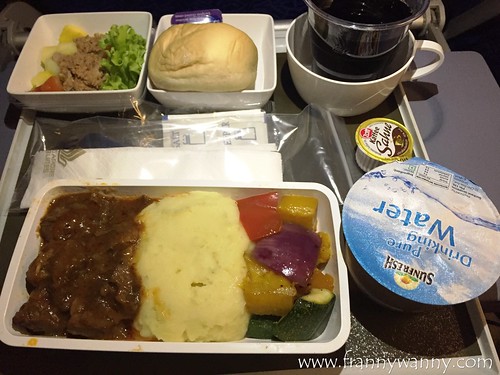 Paul enjoyed his Braised Beef in Red Wine Rosemary Sauce though which was served with creamy mashed potato and veggies. Oh such lucky man! 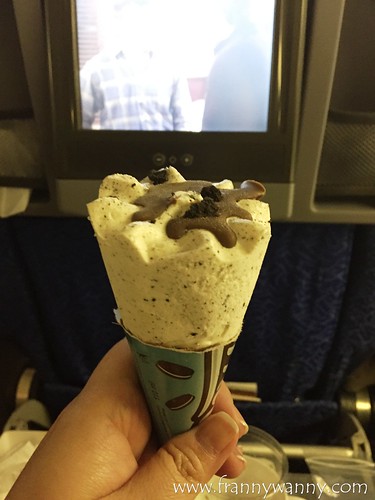 To end our meal, we had Cookies and Cream Cornetto Ice Cream which was my least favorite among all 4 flavors that I've had throughout these whole journey.

As you can see, airplane food is really a game of luck. Some flights, you get to be served with a meal that's up to your liking and on another, one that might have fell below your expectations. What I love most about flying and dining at Singapore Airlines is the superb service that we always get all the time. I can't remember the number of times the Flight Attendant would willingly refill my glass of Soda Water or one who gave us packets of nuts upon seeing that we're both enjoying our in-flight movies.

How I wish my next trip would come soon as I can't wait to be back on-board Singapore Airlines.
airline airplane food economy class inflight meals manila onboard SIA singapore singapore airlines sq 916 sq 918 sq 921