Just like that, 2016 has made its graceful exit and in comes the start of another year. How has been your 2017 so far? For us, it has been really fun as we got to spend a lot of quality time with family. Well, the festivities is definitely far from over as we're all anticipating the coming of the Fire Rooster in less than 3 weeks time. That right! It's time to stock up on round fruits, fill up our red packets with money (and hope we'll get a lot too) and toss for luck and prosperity. Next to Christmas and New Year, the Lunar New Year is my next favorite holiday. It's also the time where we get to eat, eat and eat some more! 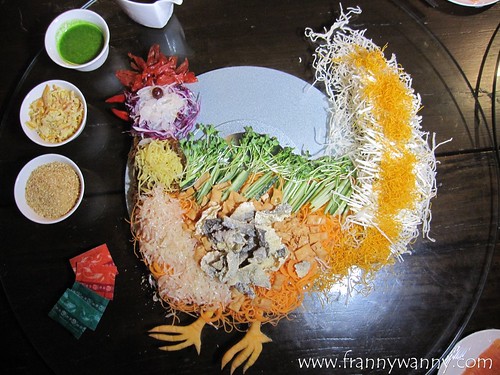 Since moving to Singapore, one thing that I look forward to every Chinese New Year is the Lo Hei. I really love it! I enjoy the whole process of saying all the well wishes while adding in each ingredient and tossing it all up for luck. I also love the sweet tangy taste and most of all, the fresh salmon slices and the crunchy chips too. A few week ago, I got to sample Cherry Garden's Success set menu (S$138 per head) which was specially created for the coming CNY festivities. 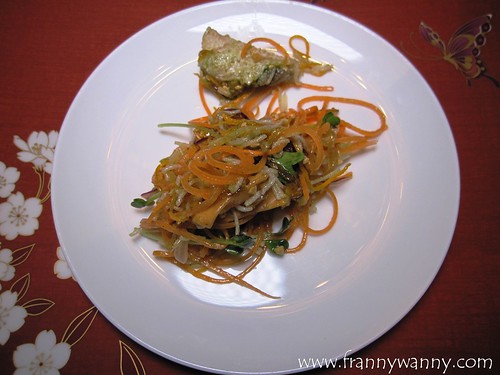 First up was the Prosperity Yu Sheng (S$78-S$156) which comes with salmon slices, crispy fish skin and creatively shaped like a rooster. So pretty, don't you think? They also got the Eight Treasure Yu Sheng (S$888) which has Alaskan King Crab, Otoro, Hamachi and Maine Lobster to name a few. This is definitely a premium Yu Sheng and will surely bring more luck this year. Huat Ah! 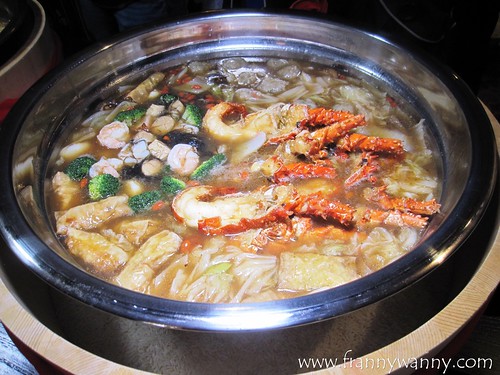 Aside from the traditional Yu Sheng, we got to try their signature Cherry Garden Luxurious Pen Cai which weighs a total of 25kg! Can you imagine that? That's almost as heavy as a check-in baggage! It's filled with more than 15 premium ingredients such as lobster, prawns, sea cucumber, dried oyster rolls, conpoy, roasted pork belly, roasted duck and so much more. 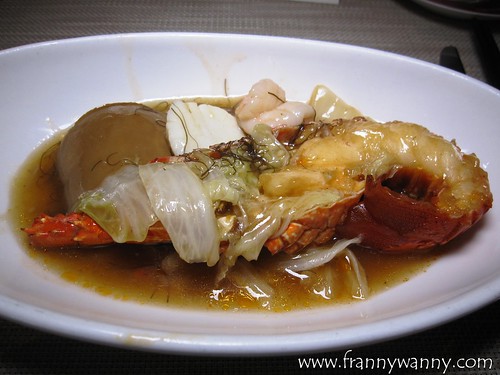 The Chef had to serve this dish in three ways as it's really impossible to get all ingredients in one go. This is definitely one of the best dishes to have especially when you'll be hosting a big group or a huge family as the savory broth gets richer and tastes even better over time. Of course, I enjoyed the huge lobster and braised four-head abalone the most. 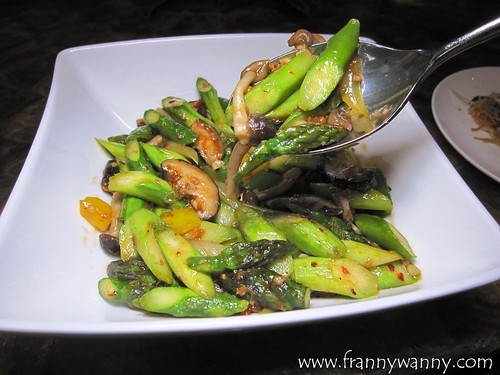 To balance out the rich flavors, we had the Wok-Fried Mushrooms and Celery with XO Sauce. Of course, we gotta eat our veggies but since it's the festive season, the veggies was extra yummy too making it such a treat to have some greens. I love how the celery was so crisp and the XO sauce definitely brought out the flavor of this dish. 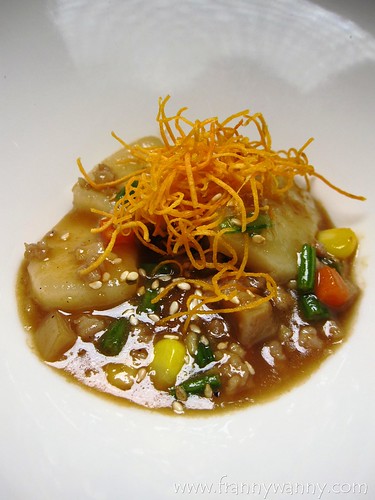 We also had the Braised Shanghai Nian Gao with Kurobuta Pork and Mixed Vegetables.  Normally, nian gao (sticky rice cake) or tikoy as called in the Philippines are served sweet and as a dessert. I'm quite surprised to have this as a savory dish and I got to say that it was very good. It reminds me of the Korean tteokbokki which has this nice sticky, "qq" texture and it went so well with the pork and veggies too. The only missing with this dish is...rice. :) This was one of my favorite dishes that day. 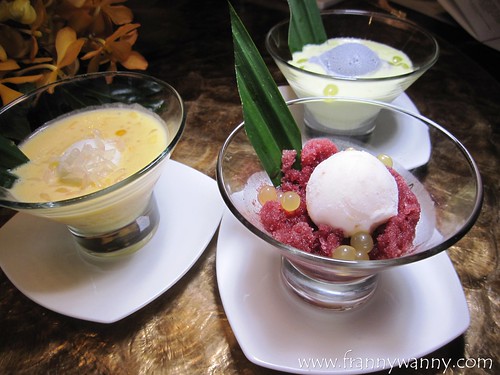 For dessert, we got the Cherry Garden Trilogy Dessert Delight. It comes in three stoplight-inspired colors where the red is the Cherries in nui er hong and aged kuei hua wine cocktail jelly, the yellow is the ever popular Chilled Cream of Mango, Sago pearls, Pomelo and Lime Sorbet and the green bowl is Organic Black Bean Pudding with Japanese Sesame Ice Cream. I personally love the latter one as the black bean pudding tastes very much like soy pudding (tau hue) and of course, who doesn't love black sesame ice cream. The mango sago is definitely one that everyone is most familiar with and this is perfect for kids or those who wants to play it safe. I don't take alcohol so I skipped the red dessert bowl but my lunch mates all had high praises for it.

It's time to plan your CNY reunion dinners and place your orders should you prefer to takeway the Yu Sheng or the Pen Cai. These items are available at Cherry Garden from 5 January 2017 until 11 February 2017.