October 13, 2007
After a delicious dinner at Guilly Island last night, Paul and I were both craving for something sweet. Would a slice of chocolate cake suffice? nah... How about a bowl of mais con yelo or halo halo? maybe not... We were just circling around Greenhills, wasting precious gasoline and still clueless on what to have for dessert. Finally, Paul suggested that we drive to Aurora Boulevard and see if Nestle Creamery is still open. Yay! I think i am in the mood for ice cream Ü

It wasnt a long drive to Aurora Boulevard, but since it was almost 10:30PM, sadly our favorite childhood ice cream parlor is already closed :( drats..so where to next. Then Paul noticed a small Magnolia store across the street. Hmm.. could it be a Magnolia ice parlor hoping to rival against Nestle? We drove over to the other side and true enough it is a tiny (at in super mini compared to their competitor across) ice cream shop by Magnolia. At first glance, the ambiance isnt much, it somehow looks like an old fast food place turned into an ice cream store (think along the lines of Tapa King/Goto King turned Magnolia Ice Cream store). It has a small kiddie area at the side and a couple of freezers selling ice cream in pints and gallons. 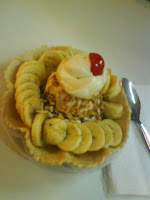 We were led to a table and were given the menu. The choices weren't that much..its either you get a sundae, a waffle sundae, a banana split, parfaits, a glass of ice cream shake or an ice cream cone. There were around 4-7 varieties under each type and the price ranges from P60 - P140. The menu wasnt bad, it had photos of majority of the items being offered to give the customer an idea of what their order would look like.
Since we both loveee sundaes and waffle cones we got the banana chocolate waffle sundae to share. This is a scoop of vanilla ice cream with swirls of chocolate syrup, topped with whipped cream and a piece of cherry on top sprinkled with nuts and finally served on a waffle bowl. Not bad.. We decided to share on this one because it looks pretty big based on the photo.
We waited for 10 minutes until finally our waffle sundae came. First reaction: "ngak! ito na un?"
There in front of us was a tiny waffle bowl with a tiny scoop of ice cream and the works. For Php.80, we were somehow expecting something a lil bit bigger than this. Oh well...ok lang yan para di nakakataba. 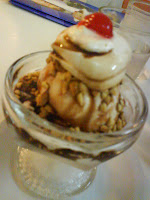 Obviously not satisfied with our first order, we got a chocolate sundae also to share. Again, another tiny sundae was served to us. After we signaled the waiter for our tab, he approached our table and said "P140 po maam" and just held on the bill tray waiting for us to pay up. This was the first time i've encountered this approached here in the Philippines and I must say I was pretty surprised by it. Normally, servers would leave the money tray on the table of the customer and will only go back after a couple of minutes or once given the signal by the customer himself. After paying our bill, another server brought our change back. Ok na sana but when she saw a piece of table napkin on the floor, she picked it up and placed it on our table. Sue me for being maarte but i was appalled by her action. It was good enough that she saw the napkin on the floor and decided to pick it up but why does she have to put it on our table? I was thankful that there was no gooey, disgusting matter stucked to the napkin but still. She could have just threw it in their trash bin, right? ugh.
the mini ice cream sundaes were pretty forgivable, the lack of varieties understandable but the service given was horrible.
the verdict: negative stars for Magnolia ice cream shop (may utang pa sila)
i am still sticking to Nestle Creamery and obviously Nestle doesnt have to worry about their "competitor" across the street.
food ice cream magnolia warning