- October 28, 2015
When one says Japanese cuisine, admit it. The first thing that comes to mind is -- SUSHI. This could probably be followed by ramen, tempura and the donburis. Nothing wrong with that as all those are correct but what I love about the Japanese cuisine is its grand variety of dishes using a lot of different ways to prepare it. From raw, we get to enjoy boiled, steamed, deep-fried, pan-fried and grilled. The list could go on and on, actually. 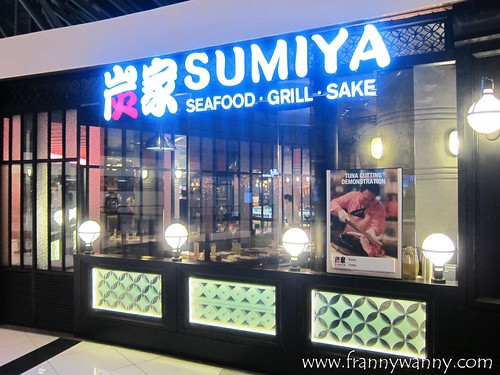 I was invited to try Sumiya located also at the new wing of Suntec City. It's located right across my fitness gym so just imagine how difficult it is to concentrate while slaving away on the treadmill and right in front of you is a row of tempting restaurants. Sumiya means charcoal house in Japanese and living up to its name, it boasts of being the first in Singapore to use two food preparation technologies namely, the fish-drying machine as well as the inori genshiyaki which is an old-school Japanese way of grilling using charcoal. 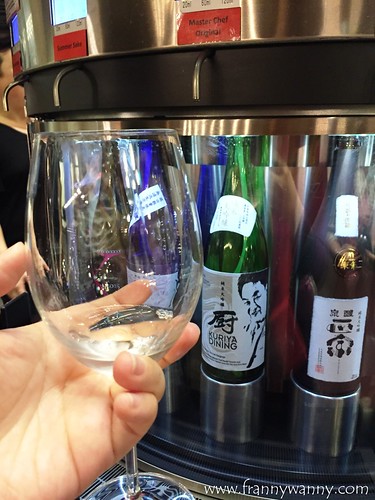 We took a quick tour around the restaurant and the best way to start your meal is to visit the eye-catching wine dispenser which houses 16 different types of sakes arranged from light to the more full-bodied kinds. I tried the Kuriya Original Sake (S$4.50/20ml) which was very light but you'll immediately feel your body warming up after your first gulp. Cheers!

I had fun checking the sake dispenser out as you simply insert a post-paid card into the machine choose which sake you'd like to try and its corresponding quantity. I've seen a lot of wine dispensers in the past but it's the first for me to see this in a Japanese restaurant. 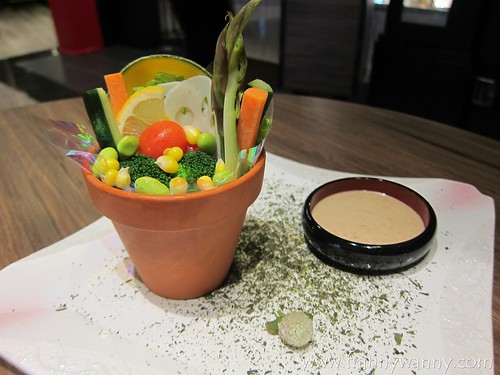 Moving on, we started our meal with something healthy. The Garden Salad (S$14.80) came in a pretty flower pot making it something so attractive that hopefully kids will also like and eat. No need to dig into the pot but instead, pull out the plastic sheet to reveal a generous portion of Japanese potato salad mixed with fresh greens, corn, peas, carrots and crab stick served with Japanese sesame dressing. I mostly had the potato salad with kani which I have to say was quite tasty. 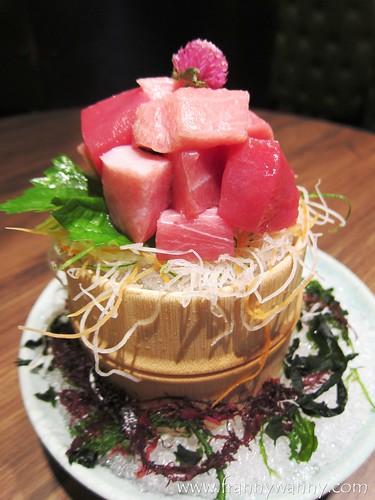 Following our healthy start, we had the Fresh Bluefin Tuna Mixed Cube Sashimi (S$48). Another beautiful dish which has garnered a lot of oohs and aahs around the table. Look at the thick chunks of fatty tuna! I think I felt my heart skipped a beat when it was first served to our table. Was that love at first sight? What makes this so special is that it actually consists of 3 parts of the tuna -- ootoro (fatty tuna belly), chutoro (medium fat tuna) and akami (lean tuna). The ootoro, which I know I'm really ashamed to admit, was my favourite as I love the creaminess of the sashimi. 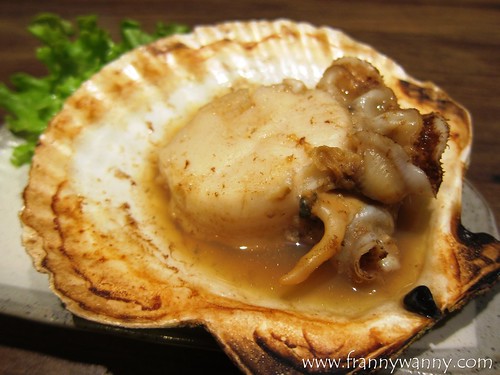 We also had the Fresh Hotate Isoyaki (S$11.80). Flown in directly from Japan. It was so big that it's served with a pair of scissors to help you cut your scallops into half before taking a bite. 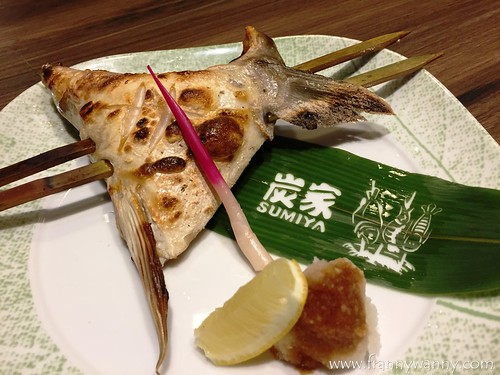 The Grilled Yellowtail Collar with Salt (S$20.80) is something that truly imbibes the meaning simplicity is beauty. Don't take this plain-looking dish for granted as you wouldn't want to miss out in enjoying this smokey, tasty cut of fish. Since it was prepared inori genshiyaki style, be ready to detect some robust smokey flavor from the grill. I really enjoyed this a lot as it doesn't have a lot of small bones and the meat was so tender too. 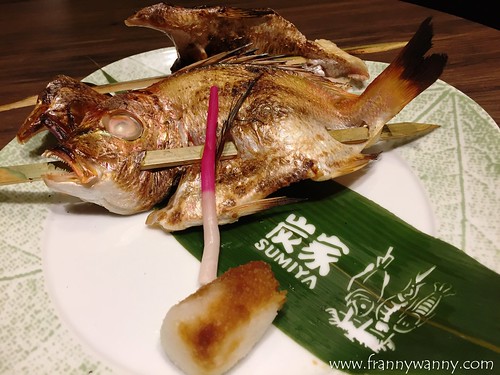 We also had the Grilled Renkodai (market price) which was pretty good but I admittedly had a hard time enjoying this as I was so afraid to swallow the fish bones. Aside from the renkodai, you can actually choose the kind of seafood you'd like the chef to grill for you and he'd gladly do it. 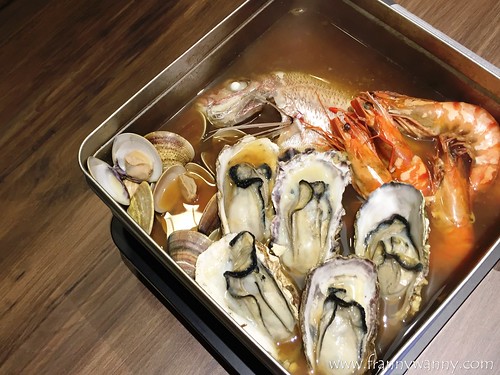 Another highlight of our meal was the Ryoshi Mushi (market price) which is like a Japanese-style steamboat. You can customize what goes into this dish and for us, we had an assortment of fresh seafood! From fish, to oysters, to clam and prawns too! I love the spicy miso soup which had tiny bits of chili padi. Really interesting! I normally don't like chili padi but after having this, I can no longer just have miso soup and would insist to add in a piece of chopped chili to perk up the taste. 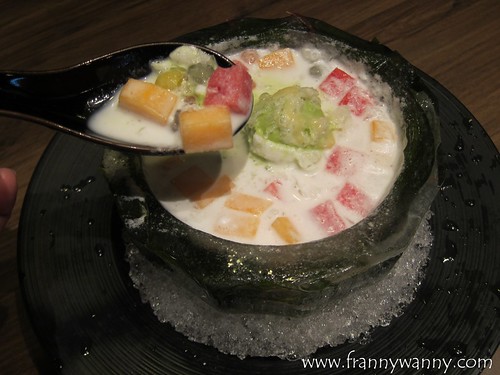 Oh we had a feast! For dessert, we had this huge bowl of Sumiya Tropical Dessert (S$18.80) reminds me of our local Filipino Halo-Halo. A generous serving of cubed mangoes, watermelon, rock melon, sago and green tea ice cream paired with red bean paste served with coconut milk sauce and shaved ice! It was so yummy and refreshing. 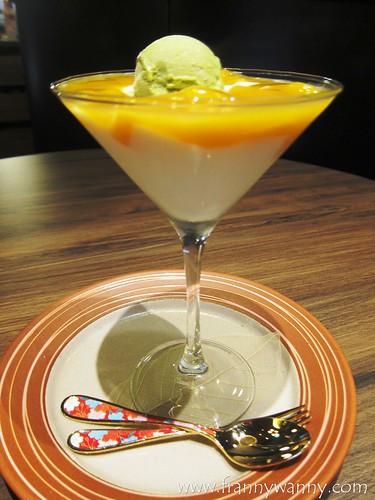 I also liked the Mango & Yoghurt with Matcha Ice Cream (S$8.80) which reminds me of my regular breakfast choice. I love that they were able to source for sweet mangoes, which is quite rare. The yoghurt had a light tangy flavor which complemented with the sweetness of the mangoes and the veggie flavor of the matcha ice cream. 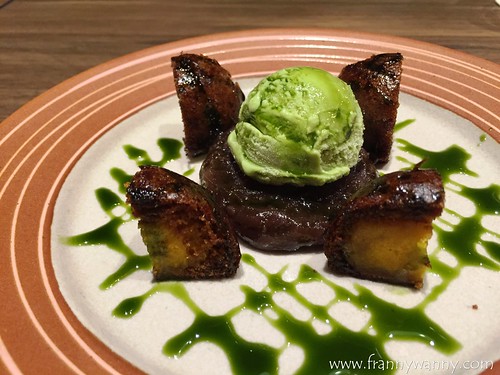 Lastly, we also tried the Pumpkin-filled Karinto Manju with Matcha Ice Cream (S$8.80). This was just a-okay for me as I was so full that I wasn't too keen on having anything deep-fried.

It was a great meal making the whole trip to Suntec City amidst the haze so worth it. I can't wait to go back to have more of the Ryoshi Mushi as well as the Fresh Bluefin Tuna and the Hotate too.