- August 19, 2016
After a very busy afternoon touring around Ubud on our first day in Bali, Indonesia, we told Swantika that we wanted to end our day tour with some traditional Indonesia Crispy Duck before heading back to the city proper and based on my friends' recommendations, we should go to Bebek Tepi Sawah which was also in Ubud. However, he told us that it's best that we go to Bebek Joni Restaurant or I Made Joni instead as it has a nicer view. Well, he's the expert and I were quite impressed and happy with the places that he brought us to earlier in the day so ok then, Bebek Joni Restaurant it is. 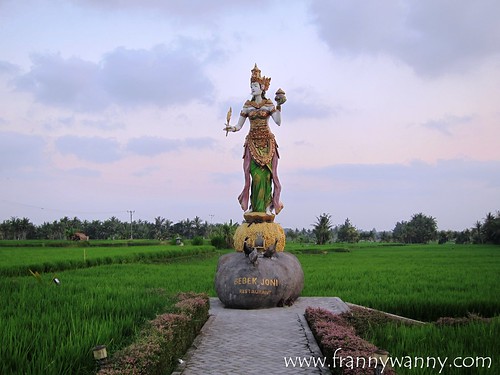 As he entered the huge compound, we noticed that we were the only ones there. Okay, maybe because we were there at 6PM so it was way too early perhaps for the dinner crowd. Not to worry though as the view was a-m-a-z-i-n-g. Save for the pesky mosquitoes that won't stop feasting on our legs, we love the soft rustle of the leaves, the smell of grass and the whole provincial vibe. It was so pretty that while waiting for our food, Paul started reminiscing about his childhood days spent in his family's farm. 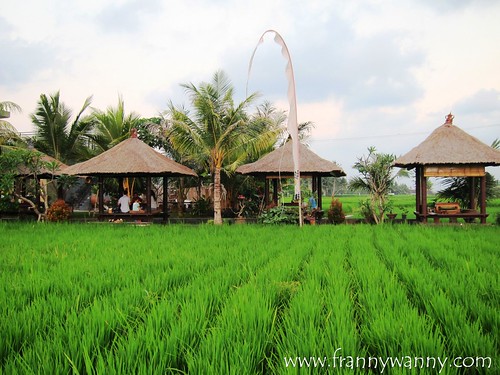 To even say that the restaurant is spacious is still an understatement. It is surrounded by acres of land that it's the type where you can't even see where the border is. Definitely a perfect setting for Simba to raise his cub following the footsteps of his father, if you ask me. So there are a lot of dining areas from the main section nearest to the entrance to all these huts which groups can rent out to give them more privacy. 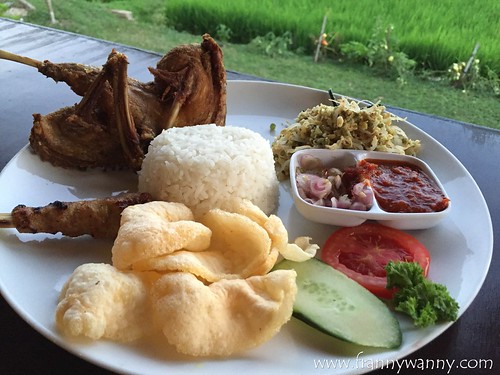 The menu was very extensive and I have to say a bit pricey. This was indeed a tourist trap and I guess they offer incentive to tour guides for taking their guests there. Normally we'd be pissed about the situation but we were just too tired from the early morning flight and the humidity that we just wanted to eat and head back to Bali for a good night sleep. We got a plate of Crispy Duck to share. I can't remember how much it was but I have to say that it was pretty good. Served on a big plate it's filled with a cup of rice, a quarter chicken, one piece of satay stick, veggies and keropok (fish crackers). Not so bad! I just forgot to specify that we wanted the leg/thigh portion but all is good as the chicken was so crispy you can even munch on the small bones. 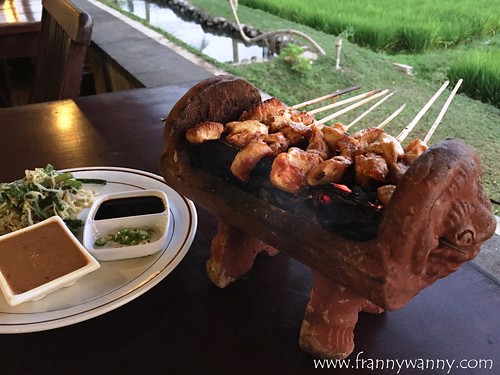 In addition to that, we got assorted Satay too. I know that satay is widely available in Singapore and we should have ordered something very Balinese or Indonesian but we were just too exhausted that we wanted something familiar to avoid having the risk of not liking what we might have ordered. The satay was just a-okay as I think the hawkers here in Singapore can do a better job x 1000! Just stick to the Crispy Duck, if you ask me.

Service was a bit slow as we feel they're really understaffed given the size of the whole place. I hope that they'd consider installing some buzzer system to make it easier for customers to call the server for any requests. I have to say that this was definitely not the best foodie spot that we went to and we'll definitely be more firm in insisting that we want to go to Bebek Tepi Sawah next time around.