This was indeed a big big surprise. It started when I was chatting with my cousin and he casually mentioned Vito's BBQ as we were talking about Chicken Rice dishes. I didn't thought much about it until I went online and saw a couple of friends from my high school posting about the same thing. "Hmm.. what is this Vito's BBQ?", I thought to myself. I was definitely so curious now and I quickly went to their Instagram page to check them out. Oh my! I'll warn you now. Do NOT go to their page at the middle of the night or you'll surely end up hungry and craving for Chicken BBQ. Trust me, I learned this the hard, hungry way.

Apparently, Vito's BBQ is named after the owners' 4 year old and he's so adorable! They started in Libis and recently, they opened their pick-up station in... *drumroll* Ronac Art Center along Ortigas Avenue and is even closer to home! Yahoooo! 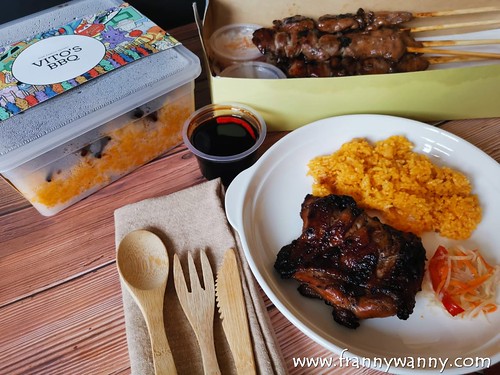 Anyway, we celebrated Grandparent's Day last last week and I decided that it would be the perfect opportunity to order from Vito's BBQ. My in-laws, especially my dear MIL, love barbecue so much so I figured she'll like this. The menu was simple and easy to understand. They have a box of 10 chicken barbecue on stick (Php. 550) also a special menu item was a tub of 4 grilled chicken thighs (Php. 550) and that's pretty much it. Of course, I just have to try their rice and they have Java Rice that's good for 4-6 pax (Php. 200). I just got 2 sets for both my twins' Ama and Kongkong (my in laws) and Gwammy and Gwakong (my parents) since the twins won't be able to celebrate Grandparent's Day together. They were so easy to transact with and for once, I managed to prepare for last Sunday's lunch days in advance. No cramming this time!

Sunday came and right on time, I got a message from Vito's BBQ telling me that my orders are ready. Since I am sending these to two difference addresses, I was very specific with my instructions such as labeling each sets just so we don't mix it up and asking them to write a short message for each recipient too. They did as requested and I was just so happy. I quickly got a Lalamove rider to make the delivery and I managed to get my Vito's BBQ lunch treat delivered on time. What a stress-free order! 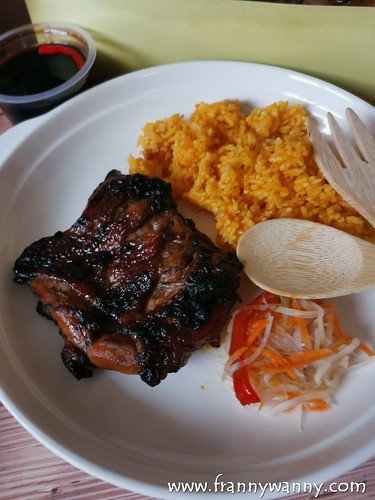 Now, the verdict. The food was ahhhhhh-mazing! I'm not exaggerating really but it was very good! The chicken was so juicy and tender. It was marinated so well that it was so delicious. Everyone in the family loved it! It came with some barbecue sauce and atchara which indeed completes the meal. Of course, even the Java Rice was so yummy. We had a lot of leftover for lunch that I requested if we can set some more rice for me for dinner. Sorry, Java Rice is indeed LIFE. 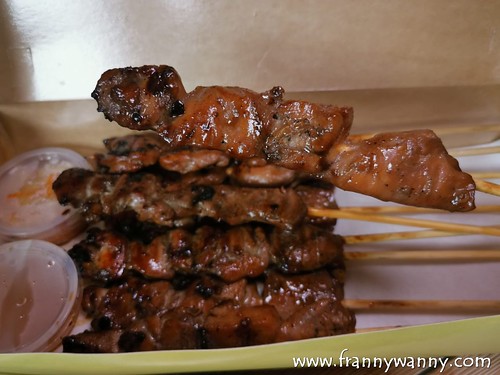 I love the chicken barbecue on stick because it's cut into bite-sized pieces and it's so tender that you don't even have to struggle as you try to take it out of the stick. It was THAT good. The chicken thigh fillet were also so good. I honestly can't choose which one I like best. I think I gotta say that I love them both!

It's just such a happy feeling when you have discovered a gem. I took a gamble in taking the words of my schoolmates about Vito's BBQ and I ordered quite a lot for my first attempt. I'm glad that it was worth every single penny as everything from the chicken, java rice down to the sauces and atchara were all so good. I'd even be bold in saying that they have one of the best chicken bbq with java rice in town!

Follow Vito's BBQ on Instagram page to get updates or to place an order. I heard that they're sold out till next week so you have to pre-order right away to enjoy your very own Vito's BBQ.