Trivia Time! Did you know that majority of the Filipino-Chinese in the Philippines all came from just one province in China called Fujian. This is found at the southern part of China that's closest to Taiwan and since it is located near a big body of water, a lot of traders lived here. Eventually, people in Fujian migrated to neighboring countries such as Taiwan, the Philippines and Singapore to name a few. Interesting though that Hokkien, the dialect spoken in Fujian, has several versions/intonations depending on the person's current location. Case in point, I have a very different sounding Hokkien accent vs. my cousin who has a similar Hokkien lineage residing in Taiwan.

Anyway, let's talk about Hokkien/Fujian cuisine! Since Fujian is near the water, majority of the famous Hokkien food consists of seafood. One of the most popular Fujian specialties is the soup called Buddha Jumps Over the Wall (putiaojiu), it's a very premium soup that's filled with all of the best and expensive ingredients such as sharks fin, bamboo shoots, abalone, sea cucumber, fish maw, chicken, pork and many more! Commonly available in high-end Chinese restaurant, this soup is normally serve in single serving bowls instead of in a big bowl for sharing. In addition to this, Fujian is also known for having really good tea such as oolong tea which is widely served all over the world.

What's funny though is that while majority of the Fil-Chis have Hokkien lineage, it's rare for one to find a restaurant that offers Hokkien-style dishes. We were so happy that Putien finally opened here in the Philippines. I've known about Putien back when I was residing in Singapore. They have a branch in our neighborhood and I've been hearing raves about their famous Fried Bee Hoon. It was only just a few months ago when I accompanied my in laws for their eye check-up that we decided to have dinner at Putien. We loved it so much that Paul and I decided to go back there with the twins and Mommy not long after. 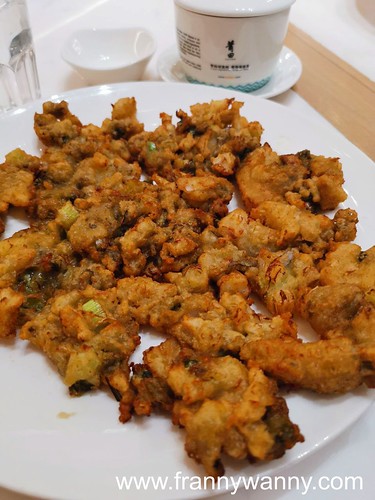 Putien is located at the 5th Level of The Podium Mall and is right beside their sister restaurant -- Niu by Vikings. Unfortunately, the restaurant was barely filled when we went. Perhaps not a lot of people are dining out even as restrictions have been lifted. We were led to our table which thankful had a couch which allowed the twins to have more space to move around during the meal.

What's on the table? 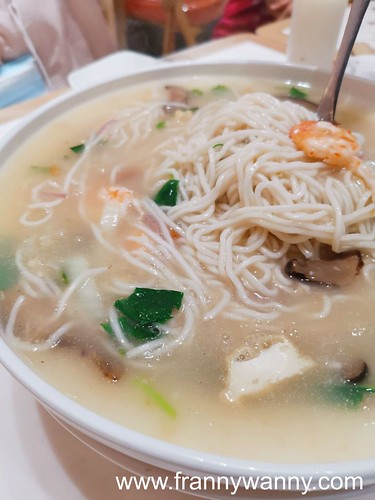 Putien Lor Mee -- One of the best and yummiest dishes that we've tried at Putien. It comes in two sizes depending on the size of your group. We initially got the small bowl during our first visit but since there were more of us the second time around, I went for the medium-sized bowl. It came with a burner so your noodle soup stays warm all throughout. I love the al dente noodles and how it's filled with an assortment of seafood. The soup broth was so good and comforting. 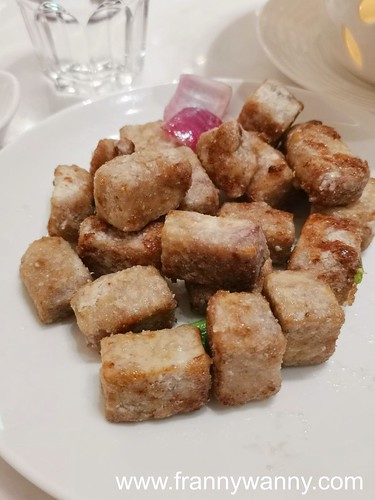 Stir-Fried Yam -- I love yam in all shapes and sizes and I love that this one was caramelized and stir-fried perfectly. It makes for a great appetizer and one that I will never miss to order at Putien during every visit. 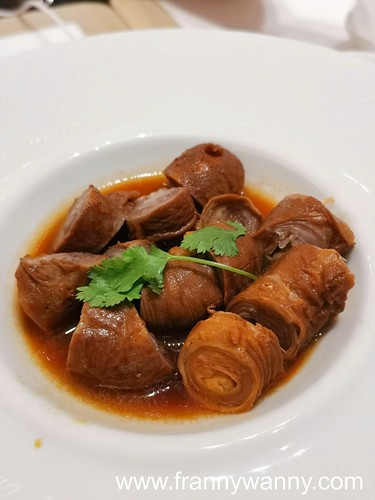 Braised Pig Intestine -- This was an impromptu choice. We've actually placed our order when Mommy spotted this in the menu and so we asked the server to add this to our list of orders for us to try. First of all, you must like intestines. Secondly, I can assure you that if you do, you will love this. It doesn't have any funky after taste or smell, in fact it has a nice gelatinous bite and it's marinated so well too. It was so good! I'm definitely ordering this again next time.

Putien Crispy Oysters (see photo above) -- Another favorite of mine. Okay, if you can take the heat, try Putien's homemade chili oil. Paul loves this so much that he would request to have one container placed near him. Dip the oysters into the chili oil and enjoy! 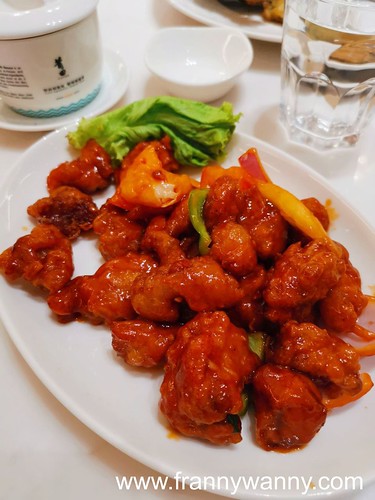 Putien Sweet and Sour Pork with Lychees -- Now, here's what we ordered for our little VIPs. They truly enjoyed the crunchy pork that's covered in sweet and tangy sauce and the surprise are the little bits of lychees too. Remember how I would judge a Chinese restaurant by their Sweet and Sour Pork and I'm happy to share the Putien definitely won this with flying colors. The serving size was quite good too so we all managed to enjoy this as well.

How I wish that Putien will soon be filled with customers as more people truly have to try and enjoy authentic Hokkien dishes. Service was good and they actually have private rooms which is perfect for people dining in bigger groups.

Lately, I've been feeling quite restless. Despite trying my best to relax every weekend, I feel that there's something missing... Today I woke up and realized that it has been 5 whole months since we've last traveled and that's when I got my answer. I miss traveling and that's what's missing in my life right now. Paul and I have been so busy that we haven't been out of Metro Manila since April for our Taiwan trip . For someone who used to travel at least once a month before, five months of no traveling activity is truly hazardous to my health. Well, we're taking it step by step. First, we've booked a couple of short trips scheduled in the next few months. Next, here I am again reading up on our next target destinations, soon will be working on our itineraries. Lastly, we were gifted with this amazing bag that we will surely be bringing with us on our next trip. It's a pretty Crumpler Spring Peeper with Wheels (Php. 9,850)! The perfect an
Read more