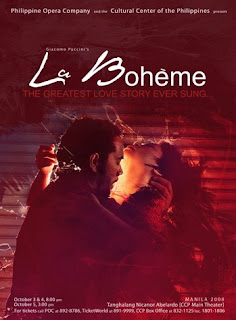 Being fans of theater and the arts have led both Paul and I to watch a number of stage productions that ranges from serious dramatic plays to fun and lively musicals. From Avenue Q to the West Side Story and to smaller school productions, we are blessed to be given a little piece of upgrade in our play-watching experience as we were invited by a dear friend and fellow blogger last night to catch the first technical rehearsal of the much-awaited Opera entitled La Bohème.

Tagged as The Greatest Love Story Ever Sung, I was so intrigued and excited to watch the play myself. Thankfully, the weather cooperated with us making our drive to CCP short and pleasant. Too bad, due to some minor time mixed up, we arrived just as Act III was about to begin. Nonetheless, I was instantly enthralled by the powerful voices of the actors.

I realized that one way to fully appreciate an opera especially one that makes use of a different language is to read up. Although Floy Quintos' version of La Bohème is set in modern day Manila, the songs are still sung in pure Italian. Had I not took Anton's advice and to familiarized myself with the synopsis of the play, I guess I wouldn't be able to appreciate it as much as I did last night. I also took the extra step by sharing with Paul the synopsis that I've read so he won't be at a lost as well.

Noted that it was a technical rehearsal, we had to bear the stop-go-stop-and-go-again pattern that occasionally happens whenever the internationally renowned conductor, Helen Quach, was not happy with the way a word was pronounced or the orchestra's timing was a bit off. Still, I can't help but swoon and rave about the beauty of La Bohème.

Allow me to share with you a synopsis of the play from my reliable source:

Marcello is painting while Rodolfo gazes out of the window. In order to keep warm, they burn the manuscript of Rodolfo's drama. Colline, the philosopher, enters shivering and disgruntled at not having been able to pawn some books. Schaunard, the musician of the group, arrives with food, firewood, wine, cigars, and money, and he explains the source of his riches, a job with an eccentric English gentleman. The others hardly listen to his tale as they fall ravenously upon the food. Schaunard interrupts them by whisking the meal away and declaring that they will all celebrate his good fortune by dining at Cafe Momus instead.

While they drink, Benoit, the landlord, arrives to collect the rent. They flatter him and ply him with wine. In his drunkenness, he recites his amorous adventures, but when he also declares he is married, they thrust him from the room--without the rent payment--in comic moral indignation. The rent money is divided for their carousal in the Quartier Latin.

The other Bohemians go out, but Rodolfo remains alone for a moment in order to finish a newspaper article, promising to join his friends soon. There is a knock at the door, and Mimì, a seamstress who lives in a flat below, enters. Her candle has blown out, and she has no matches; she asks Rodolfo to light it. She thanks him, but returns a few seconds later, saying she has lost her key. Both candles are extinguished; the pair stumble in the dark. Rodolfo, eager to spend time with Mimi, finds the key and pockets it, feigning innocence. In two arias, they tell each other about their different backgrounds. Impatiently, the waiting friends call Rodolfo, but, while he suggests remaining at home with Mimì, she decides to accompany him. As they leave, they sing of their newfound love.

A great crowd has gathered with street sellers announcing their wares. The friends appear, flushed with gaiety; Rodolfo buys Mimi a bonnet from a vendor. Parisians gossip with friends and bargain with the vendors; the children of the streets clamor to see the wares of Parpignol, the toy seller. The friends enter the Cafe Momus.

As the men and Mimi dine at the cafe, Musetta, formerly Marcello's sweetheart, arrives with her rich (and aging) government minister admirer, Alcindoro, to whom she speaks as she might to a lapdog. It is clear she has tired of him. To the delight of the Parisians and the embarrassment of her patron, she sings a risqué song, hoping to reclaim Marcello's attention. Soon Marcello is burning with jealousy. To be rid of Alcindoro for a bit, she pretends to be suffering from a tight shoe and sends him with it to the shoemaker to be fixed. During the ensemble that follows, Musetta and Marcello fall into each other's arms and reconcile.

The friends are presented with the bill, and to their consternation find that Schaunard's money is not enough to pay it. The sly Musetta has the entire bill charged to Alcindoro. The sound of approaching soldiers is heard, and, picking up Musetta, Marcello and Colline carry her out on their shoulders amid the applause of the spectators. When all have gone, Alcindoro arrives with the repaired shoe seeking Musetta. The waiter hands him the bill, and, horror-stricken at the charge, Alcindoro sinks into a chair. 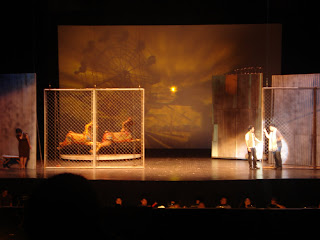 Peddlers pass through the barriers and enter the city. Amongst them is Mimì, coughing violently. She tries to find Marcello, who lives in a little tavern nearby where he paints signs for the innkeeper. She tells him of her hard life with Rodolfo, who has abandoned her that night. Marcello tells her that Rodolfo is asleep inside, but he wakes up and comes out looking for Marcello. Mimì hides and overhears Rodolfo first telling Marcello that he left Mimi because of her fickleness, but finally confessing that he fears she is slowly being consumed by a deadly illness. Rodolfo, in his poverty, can do little to help Mimi and hopes that his pretended unkindness will inspire her to seek another, wealthier suitor.

Out of kindness towards Mimì, Marcello tries to silence him, but she has already heard all. Her coughing reveals her presence, and Rodolfo and Mimì sing of their lost love. They make plans to separate amicably, but their love for one another is too strong. As a compromise, they agree to remain together until the spring, when the world is coming to life again and no one feels truly alone. 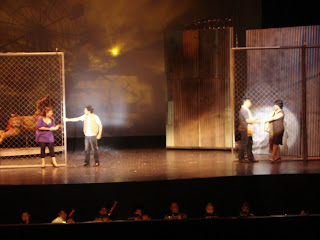 Meanwhile, Marcello has joined Musetta, and the couple quarrel fiercely: an antithetical counterpoint to the others' reconciliation. 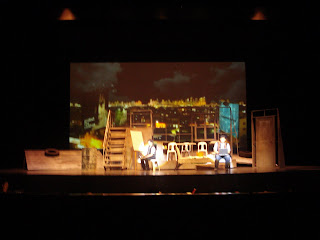 Marcello and Rodolfo are seemingly at work, though they are primarily bemoaning the loss of their respective loves. Schaunard and Colline arrive with a very frugal dinner and all parody eating a plentiful banquet, dance together, and sing. As they were having fun, Musetta arrives with news: Mimi, severely weakened by her illness, is downstairs and has asked to be brought to Rodolfo to see him one last time. Rodolfo rushed out to get Mimi and assisted her to lie in bed. Musetta and Marcello leave to sell Musetta's earrings in order to buy medicine, and Colline leaves to pawn his overcoat. Schaunard, urged by Colline, quietly departs to give Mimi and Rodolfo time together. 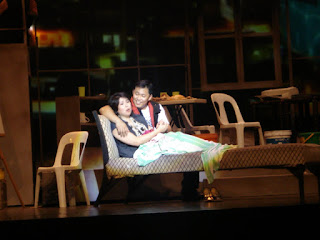 Left alone, they recall their past happiness. They relive their first meeting--the candles, the lost key--and, to Mimi's delight, Rodolfo presents her with the pink bonnet he bought her, which he has kept as a souvenir of their love. The others return, with a gift of a muff to warm Mimi's hands and some medicine, and tell Rodolfo that a doctor has been summoned, but it is too late to help their friend, who lapses into unconsciousness. 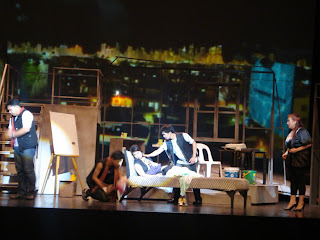 Reading the synopsis is definitely not enough for one to truly appreciate the beauty of the story. Watching Mimi growing weak and Rodolfo, trying with all his might to make the most of the time left with Mimi, I felt my heart breaking with so much sadness. "It is truly a wonderful love story", I concluded last night.

In just a couple of hours, you will witness love growing, love bringing out the best and worst in a person, love making it harder for one to let go, love reuniting two people and finally, you'll see the tragic death of love.

I urge everyone to take time out this weekend and to catch this wonderful opera production by our very own Philippine Opera Company at the CCP main theater. It will open tomorrow night with a cocktail gala at 8PM. You may also catch the 2nd show on Saturday, October 4 at 8PM and the last show on Sunday, October 5 at 3PM. Tickets are availabe at any Ticketworld outlets.