- October 01, 2009
*This is my official entry to the Nuffnang Asia-Pacific Blog Awards contest. Wish me luck!!!*

Due to the nasty tropical depression that recently hit our country, we sadly had to endure a couple of hours without electricity. Since it was the weekend and there's really nothing much that can done in the dark, my mom had a wonderful idea of engaging my sister in a krrunch game of Word Jumble! 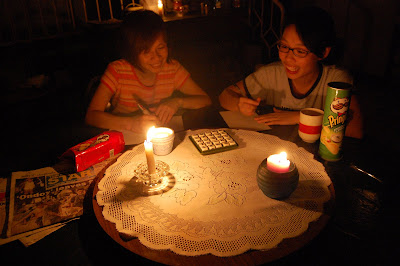 It has been a practice since the time that we were little kids that during blackouts, the entire family would play board or card games to while away the time. From Scrabble to card memory games to Monopoly, my sister and I truly cherish these krrunch moments with our parents.

The game began when Mommy carefully placed all the letter cubes into the container and covered this before giving it a long shake. I was the official timer of the game while both Mommy and my sister were the contenders. Dad just stood at the sidelines laughing at them. 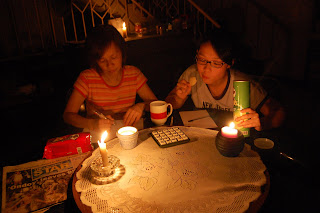 The first round was easy, Mommy was able to get more words. There were even some words that we've never heard of before. We even had to consult the dictionary to verify her answers! Ok, so one point for Mommy.

Steph got the second round by one word! What a lucky girl!

It was definitely a close match as Mommy would win in one round and Steph would follow suit. I can sense the tension as both continued to munch on their own packs of Pringles while looking for more words from the jumbled cubes. 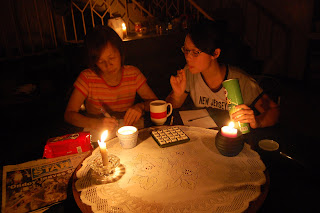 Dad and I just couldn't stop laughing. At some point, Steph even attempted to peek into Mommy's paper!

I'm glad that I loaded up on Pringles before the storm, this is really a household favorite as each member has his/her own preferred flavor. Mom loves the original one that is lightly salted and is truly addicting. My sister is a sour cream girl! She loves it so much that she can actually consume half a canister in one sitting. I love the cheese flavor that I even have a weird habit of licking the cheese powder before munching on the chips. Dad, on the other hand, prefers the spicy Pringles to which he treats himself to every now and then.

Finally, after fifteen rounds, Mommy won the game and not long after, the electricity finally came back!

This bonding moment allowed us to stay positive despite the gloomy situation that Typhoon Ondoy/Ketsana has brought to our country. While we anticipate two more typhoons coming in, I believe that being positive will keep us afloat and soon the sun will come out and shine brighter than ever. :)