April 30, 2012
When I was planning for my upcoming business trip to Beijing, I was told that I will be staying at the Marriott City Wall Hotel. With that in mind, I planned my itinerary around the hotel knowing that there's a subway station nearby making it accessible for me to sneak in some quick shopping trips in between our official visits and meetings. I've been growing through the Marriott City Wall website a lot of times that I knew the look of the hotel by heart. Thus, when the luxurious black Mercedez Benz (a.k.a. my ride from the airport) made a left turn into a small road and stopped in front of an unfamiliar looking hotel, that got me really confused. I was already too confused with the non-stop Chinese conversations thrown my way as I tried to answer back with my very rusty broken Mandarin and now, I began to question myself if this was really the Marriott Hotel and not as what was I saw in their website. 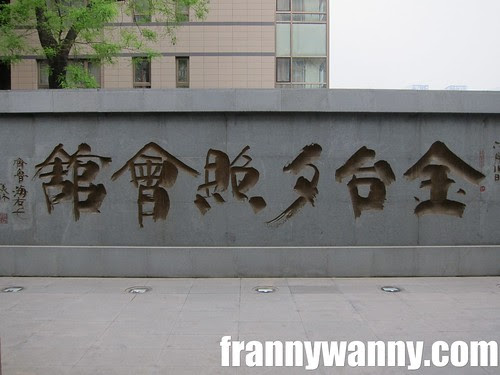 My confusion immediately disappeared as my Chinese counterpart explained that they had to change our accommodation arrangements at the last minute and here we are at the XiZhao Temple Hotel (formerly known as the Beijing King-Talent Hotel). 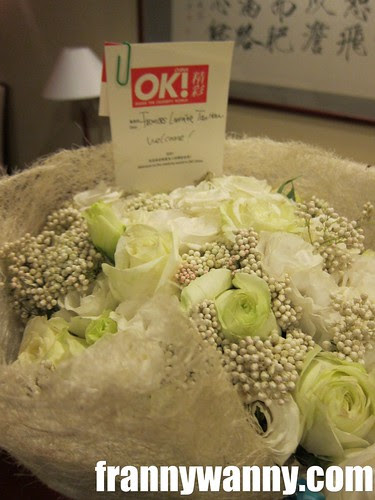 It's a small complex that's just 4-storey high. We entered the very Chinese looking lobby and there were more Chinese counterparts waiting for me with a huge bouquet of white roses. Sweet! 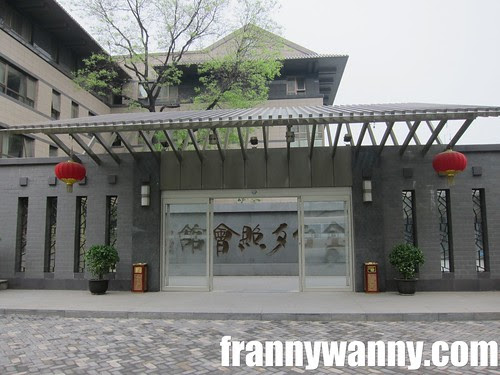 I was told that there's a temple located adjacent to the hotel. That would have been great news for my FIL or Amah who are both devout Buddhist. In fact, I learned that the hotel used to be a historical temple and they renovated this to turn it into a hotel but maintaining the classical Chinese look.

From the lobby, I was ushered to the 4th floor where my room is located. Really, I wasn't expecting anything more than a spacious deluxe room with a king size bed or perhaps two queen beds that hotels normally offer. One for me to sleep on, another to dump all my clothes on. Perfect! 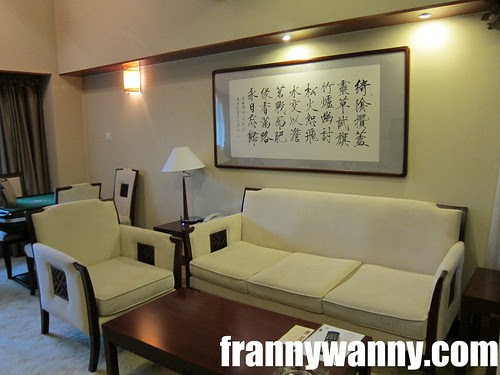 Definitely I was not expecting to see THIS. A huge room with a spacious living room, a flat screen LED TV and an electric mahjong table at the far end of the room. There's also a powder room and a pantry where I ended up placing all dirty plates in. Yes, even while abroad, I am very much still an OC.

As it turns out, I was given the Duplex Suite (approx. $216) and its a two-storey room! Yes, there's a small spiral staircase in one corner.

After making sure that I've settled in my room, my counterpart bid goodbye and told me to get some rest. All alone now, the first thing I did was to pull out my camera to document every nook and cranny of this amazing room. It took me a while to figure out how the mahjong table works and after a few minutes of pushing all buttons to no avail, I gave up and moved on. 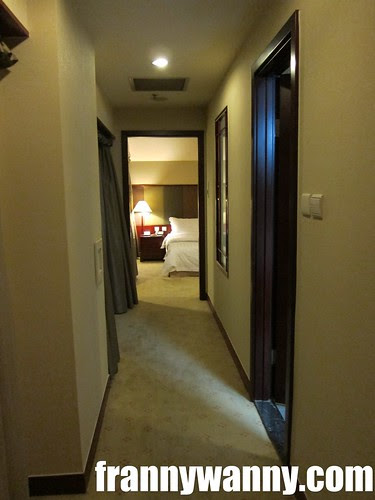 Going up the stairs, I let out a gasp as I was just expecting to have a loft-type bedroom but noooo it was a whole floor with a carpeted hallway that leads to the following: 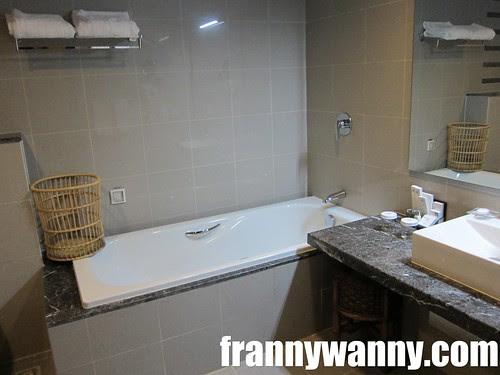 A HUGE bathroom with my very own bath tub and shower area with my favorite rain showerhead and a complete set of toiletries minus some cotton buds (hmmm). Now this is what I'd call a COMFORT room! Wish I had the chance to stay here longer. 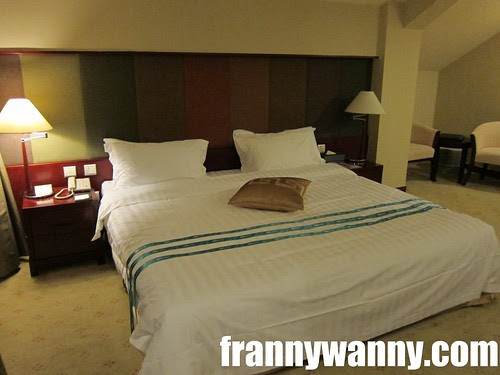 After the bathroom, this carpeted hallway ends at my bedroom. This room is even bigger than our entire hotel room in Korea (bathroom included)! I loved the big comfy-looking bed and the study table where there was free LAN and intermittent WiFi connection! 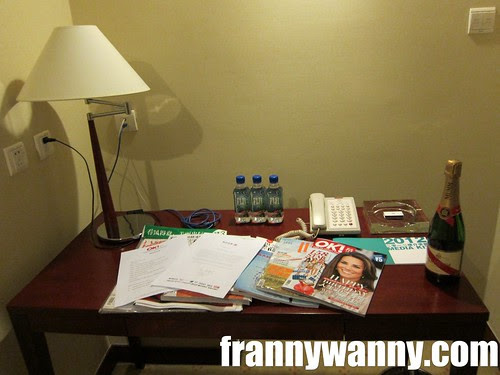 On the table, the OK! China team left a bottle of Champagne and some copies of their magazines which I happily browsed through all throughout my trip. Thank you OK! China!

It was past 9PM and feeling hungry since I barely ate during my flight from Guangzhou to Beijing, I decided to order food for room service. The menu was limited as it only had 10 food items available. Not wanting to upset my stomach on my first night in Beijing, I chose some Mushroom Soup and a bowl of Japanese Noodles with Seafood. 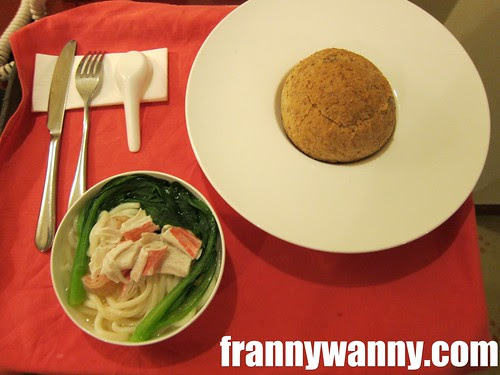 My sister saw what I was eating through Skype and asked if I was on a diet. Sadly, there wasn't really much to choose from and call it pure luck, my mushroom soup was bland and the Japanese Noodle Soup with Seafood had more tasteless, chewy noodles than seafood. Guess, it really was diet food for me that evening. I truly can't wait for breakfast the next morning!

Note that ordering can be a challenge as most of the hotel staff from the front desk to the room service and even housekeeping couldn't speak English. Once again, I survived with my broken Mandarin mixed with English. At least, they got what I wanted on my second third try and I got my food within 30 minutes. Yay! 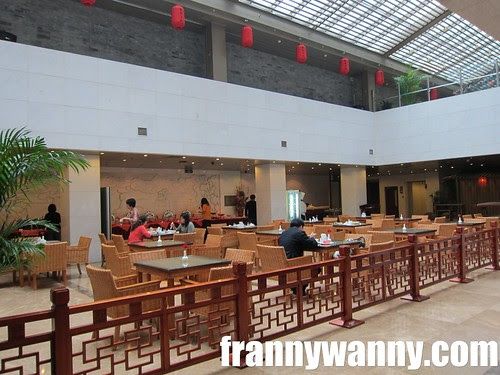 The next day, I was really excited to have breakfast! Having had a terrible breakfast experience recently in Skypark Myeongdong Hotel in Korea, I just told myself that at the very least I can have some toast, butter and a glass of fruit juice. If all else fails, I can make up for my hunger during lunch time. As I got to the ground floor, I was greeted by the cafe receptionist who pointed an empty table signaling me to sit there. A quick survey at the buffet spread and I knew this one is better than what I just had in Korea a week ago. 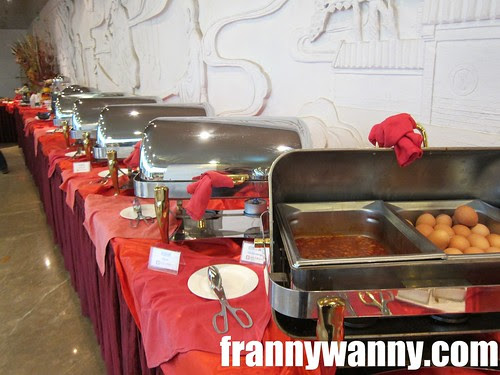 For the next three mornings, I had breakfast at the hotel and they had their staples such as the boiled eggs, baked beans, porridge (congee), a basket of assorted breads with spreads, boiled grains a.k.a steamed pumpkin and taro (which I later found out is very popular in Beijing) and their choice of meats. 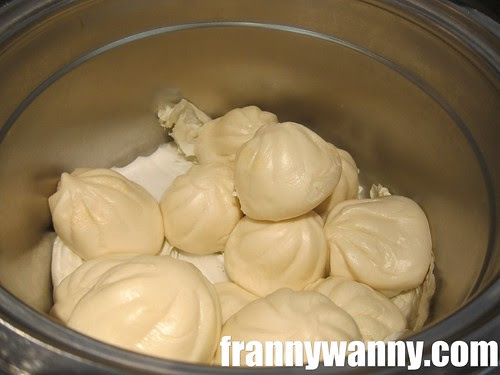 What changes are the cold cuts and noodles. Even the waiter who prepares your omelet or some ravioli soup makes the same thing every day. Well, with more options, it's no wonder a lot of people, even locals, would avail of their breakfast buffet. 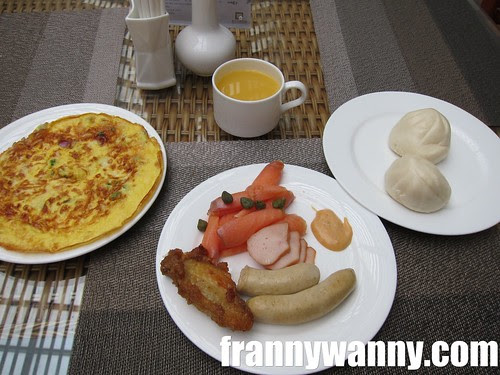 I particularly enjoyed the cold cuts (hooray for smoked salmon!), orange juice and their mini pork buns too! While I love variety, I always make sure to get these every day.

The hotel is pretty simple with not much amenities yet. I heard that they will soon offer spa services perhaps within the coming months or by next year. The hotel's location is not that accessible as the nearest subway station is still blocks away and I heard there's a bus that stops nearby but I wasn't able to try that yet. Whenever we go out on our own, we had to take the cab which can also be a challenge to get as the hotel is not located in a the main road and whenever we try to ask the taxi driver to take us to the hotel, they would ask us to pay a higher price. Some things that I dislike about Beijing. Their taxi drivers can be really abusive to foreigners as they will force you to agree to such a high rate and they drive quite recklessly too. Be sure to go to Beijing fully insured, my friends. 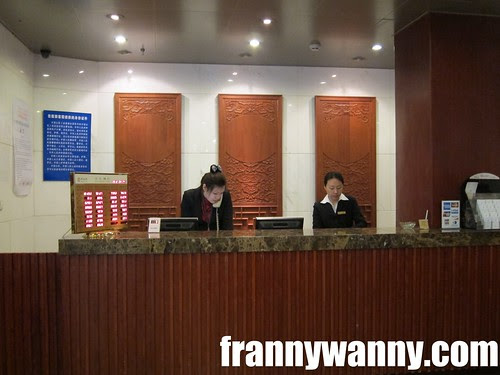 This is perhaps a good hotel if you have a lot of time to spare to leisurely stroll around, meditate or to just relax at the comforts of your room. For busy travelers who loves to fill their schedules with shopping, sightseeing and eating trips like yours truly, I highly recommend that you book a hotel that's near a subway station to make it easier to move around. Note that not a lot of people can speak English in Beijing so it's best to know your way around to lessen the hassle of asking people in every step of your way.

While going around, I took note of some hotels near the subway station like the Novotel Hotel, Marriott City Wall and the Swissotel Beijing Center. I'll make a mental note to consider them on my next visit to Beijing, China.