Discovering Concetto by Saveur at The Cathay

- April 14, 2014
There's something about discovering a new eating place that never fails to excite me. Must be the fact that it's something new... or the uncertainty of what surprises could greet you. What makes it more fun is that we're surrounded with friends who shares the same intense love for food and who are just as excited as we are whenever a new promising restaurant has opened in the neighborhood. 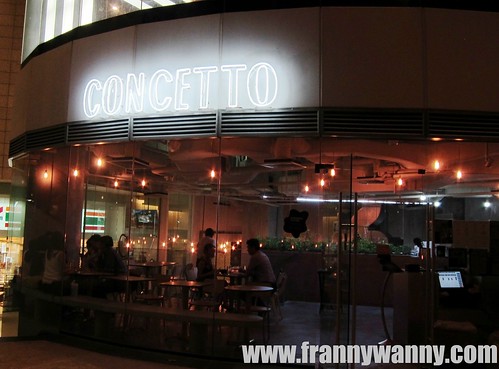 Well, Concetto by Saveur isn't exactly located in OUR neighborhood but for food, we definitely will go the distance. 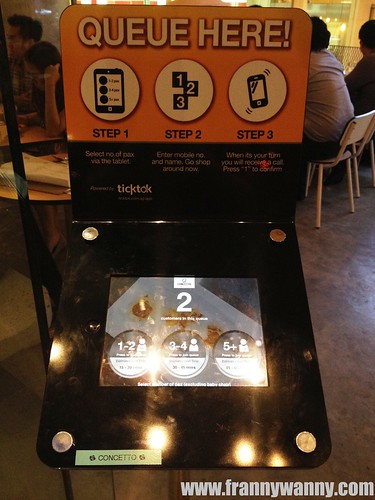 Located at the ground floor of The Cathay building, Paul and cousin J decided to have dinner here a few nights ago. Silly me, I assumed that the restaurant must be big enough to sit everyone so there was no need to make a reservation. Well, look what greeted me at the front door. An automated reservation machine wherein I had to key in how big our party was together with my mobile number. It then sent an SMS to my phone giving me my reservation number. This was also my cue to go around the mall and wait until they call to tell me that our table is ready. Apparently, a lot of customers made a reservation so they were able to quickly get their table. As for us, we had to wait for 30 minutes until I got a recorded call telling me that our table was ready and to press "1" to confirm. As soon as I did, I was given 5 minutes to get to the restaurant or our table will be given to the next person in line. How high-tech! 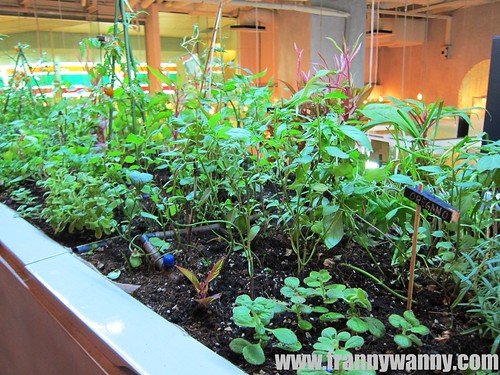 Concetto was opened by the same group who operates Saveur, a very popular restaurant in Purvis Street. I have yet to try it though but I believe it also serves Italian cuisine at reasonable prices. Passing by Concetto, I caught a familiar gastronomic aroma similar to my favorite restaurant in Manila -- Cibo. The smell relaxes me and made me all the more excited for our dinner. It's so cool that they actually have a little herb garden inside the restaurant!

The menu was pretty simple and straight-forward. Categorized as Earth (starters, salads and soup), Land (meat and veggies), Seas (seafood), Light (dessert) and Water (drinks). Since my two dinner companions were running late, I had the luxury of time to go through the menu and to make my choice while waiting for them. Wow! I noticed that the prices were very reasonable as nothing went beyond S$27 on the menu! 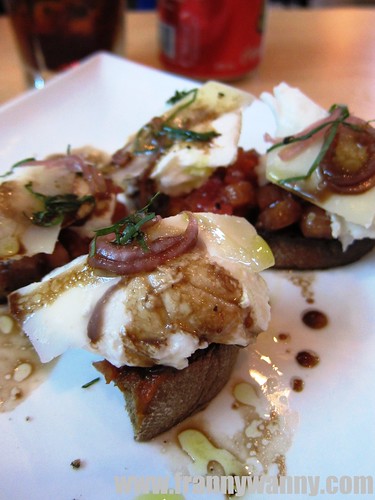 One downside of this restaurant was the service and the unclear protocol. Since our table wasn't complete when I got the call, I had the server bugging me to check where my companions were otherwise they would like me to give my table up and to wait again when Paul and J arrive. What?! Just to make them stop bugging me, I went ahead and ordered the Buffalo Mozzarella (S$8.90) for starters. Luckily, with that and my drink on the table, they left me in peace. First time for me to encounter a restaurant that would consider asking a seated guest with a drink on the table to stand up and to give way to the next in line. That was a bit off, don't you think?

It was a good thing that the food made up for the weird service. The Buffalo Mozzarella was so delicious albeit a bit messy to eat. I had a hard time balancing the thick cut of cheese, tomatoes and more cheese on top of the thinly-sliced bread that looks like it will give way anytime. Even the boys loved it too. One order comes with four bite-sized pieces so big groups might have to get two or three to share. 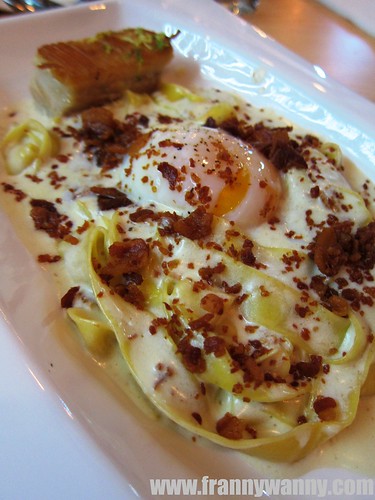 As for our mains, I went for the Creamy Pork (S$9.90) which was one of their best-sellers according to the server. Well, I have to give them props for the presentation. I immediately fell in love with the beautiful composition of al dente fettuccine noodles, crunchy deep-fried pork and a breathtakingly gorgeous sous vide egg on top. It was so beautiful I wanted to cry. Keeping my composure, I took a million and one shots instead before taking my first bite. I loved it! I have to admit it reminds me of Pasta Carbonara only this one had more drama going on with the crunchy pork and egg added into it. Even Paul couldn't stop digging into my pasta dish that I later on agreed to swap with him. That was a first though as he doesn't like creamy pasta in general. 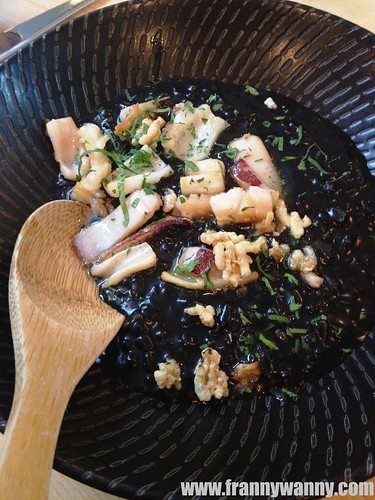 Paul had the Black Risotto (S$10.90) which he wasn't too happy about. Served with two textures of squid -- deep fried and grilled, the risotto was a tad too wet and some of the rice were quite uncooked. We also felt that it was a bit too oily and salty for our liking. Now you know why Paul happily swapped his food with mine as this one fell short of our expectations. Well, I love anything with squid ink so I didn't mind finishing this anyway. However next time, will probably try the Funghi Risotto, which was what we were choosing vs. the Black Risotto initially. 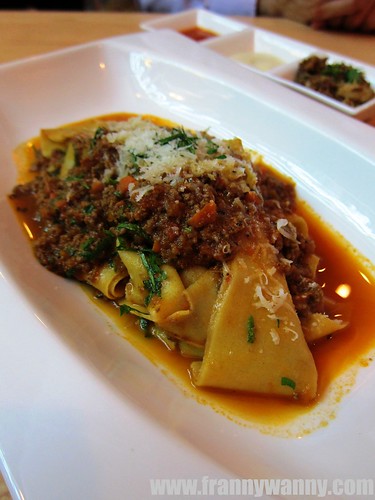 J had the Bolognese (S$11.90) which was definitely a comforting dish of pappardelle pasta noodles cooked with ragu bolognese served with three kinds of sauces -- meat sauce, cream and tomato. Quite interesting to have these three additional sauces allowing J to try each and to mix and match to his liking. It was good but J found it to be very ordinary that he just ate half of the serving while his cousin Paul happily polished his plate off. My husband just loves tomato-based pasta and this one was at par to his taste.

After our plates were cleared to prepare for dessert, we couldn't help but laugh as we somehow swapped our orders with one another. Well, at least not a single grain of risotto or a stand of pasta went to waste. 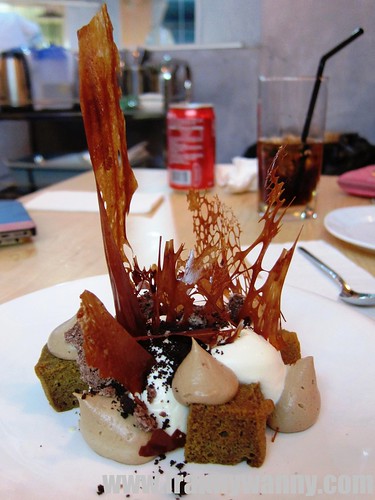 For dessert, we tried the Tiramisu (S$10.90) which was said to be done the Concetto way. Well, what they meant by Concetto way was to present it in a deconstructed way where each part of the tiramisu was plated separately in a very artistic manner. We loved it! The flavor was pretty light so don't expect strong coffee or alcohol flavors but it surely was a good way to end our meal. I highly recommend this.

Taste-wise, we had a good dinner at Concetto by Saveur. The Buffalo Mozzarella, Creamy Pork and Tiramisu were definitely the dishes that will get me to go back soon while the Risotto was a bit disappointing but still forgivable. It would have been a perfect experience if only the service was better. Aside from the eyebrow-raising experience of asking me to give up my table because my companions were late, we can't help but notice how fidgety and panicky our server was that he gave me a blank look when I asked him for a glass of water. He would also clear up our table unnecessarily such as touching our used plates if he can clear it already when it was pretty obvious we were still eating. Guess, Mr Server has OCD too. hahaha

Well, I do believe in giving second (and third) chances so, I'll definitely be back and I'll make a reservation this time.