"The only thing CONSTANT in life is CHANGE."

In today's fast-paced, ever-changing world, we have been witnesses to things coming and going in such lightning speed. Restaurants opening and later bidding us good bye. Take these past 6 months for example, I've had my heart broken multiple times upon hearing news after news of restaurants closing both here in Singapore and in Manila. Competition is indeed very tough in this business but together with that comes inflation of goods, shocking increase in rent and sudden death of food trends. So, when a certain restaurant reaches a milestone, a big celebration is should definitely in order!

I was recently invited to try the Anniversary Set Menu of Red House Seafood who's celebrating it's 38th anniversary this year. This restaurant first opened at the Upper East Coast Road back in 1976 but has moved out of their original site years after. It later moved to the East Coast Seafood Centre and opened another branch at The Quayside. Then late last year, Red House Seafood opened their flagship branch at Prinsep Street which is very near to Plaza Singapura (Dhoby Ghaut MRT Station). 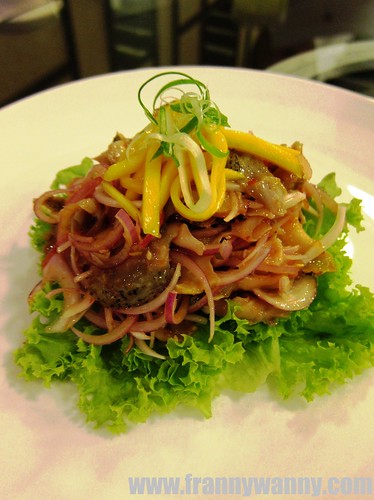 The Anniversary "Modern" Set Dinner is a delicious 7-course meal that is inclusive of a bottle of Champagne or premium White Wine or two jugs of Tiger Beer. Definitely the best way to celebrate is to have some bubbly right? Our dinner began with a refreshing platter of Chilled Spicy Whelks (S$35). I have to admit that I wasn't so sure what whelk was but a quick research on Google told me that whelks are a kind of Sea Snail. Okay... not really a fan of snails so I guess it was a good thing that I have eaten my share before I did my research. As what Mommy would say: "sometimes, ignorance is bliss." It was indeed very fresh and the sliced mangoes and onions made this starter so clean to the palate. A must-try for the brave foodies out there. 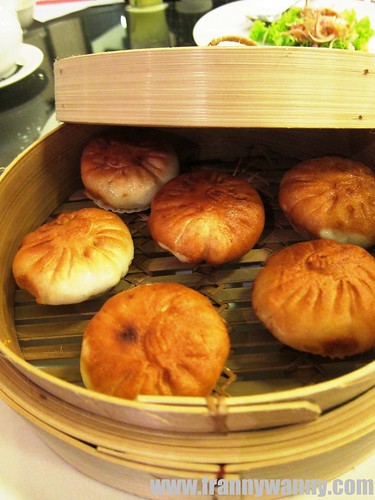 In between our first and second course came a special surprise. We were served with a huge steam basket filled with these golden baos which are Pan-Fried Chili Crab Bao (S$8 / 3 pieces). 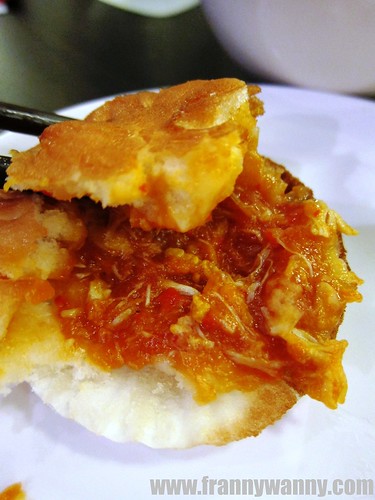 Using the exact same sauce used in cooking the Chili Crab, these soft and tasty baos are filled with chunky crab meat cooked in such creamy and spicy chili sauce. It was soooo good! Take it from me as I'm not a fan of Chili Crab but I couldn't help but swoon as I had my first bite. A bit toasted on the outside and soft inside, this delicious creation got me dreaming about it for days since that fateful evening. 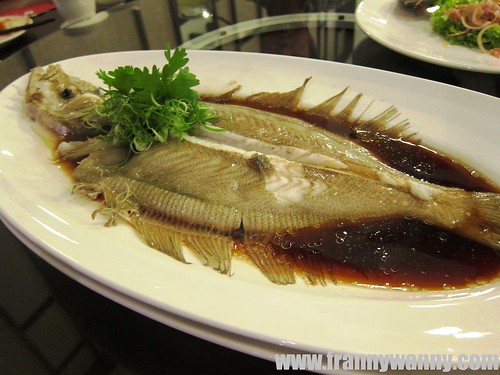 Back to the set menu, the 2nd course is Garlic Steamed Megrim Fish (S$100/kg). This is very similar to the Steamed Lapu Lapu with Soy Sauce that we would have every lauriat dinner only they made use of Megrim which is a flat fish that has a very silky taste. The meat melts in your mouth and this is the perfect dish to prep your taste buds for the parade of gastronomic dishes ahead. 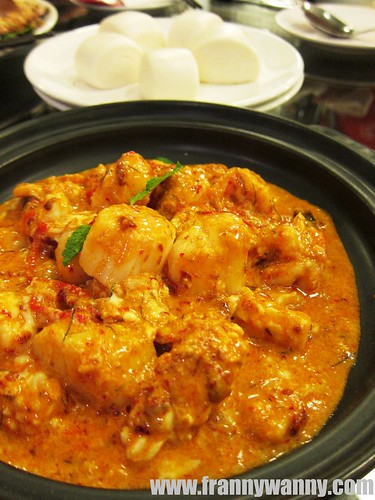 However, if want something more exciting and unique, then go for the Spicy Seafood Combination (S$28) which has fish, squid, shrimps and scallops simmered in a thick, creamy and slightly spicy sauce. I can taste the presence of kaffir-lime which gives this a Thai-feel. Served with a plate of mantou bread, you'll definitely enjoy mopping up the sauce down to the last drop. While the fish was really good, I'll probably still go for this instead of the fish for my 2nd course. 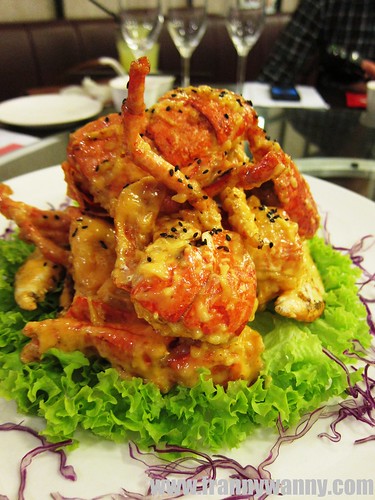 Next comes the highlight of our night -- the Scottish Blue Lobster coated with Sweet Mayonnaise (S$148/kg). Well, I've been warned. J told me that the sauce was really delicious I wouldn't be able to help it but to lick even the shell. She was right! The sweet creamy mayonnaise made this deep-fried lobster creation oh-so-yummy that I had one two three delicious pieces of this! So sorry my dear tablemates. :) 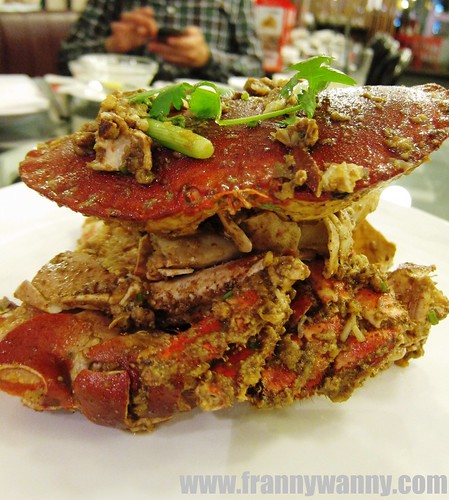 Following the lobster was the Scottish Brown Crabs in White Pepper (S$58/kg). I have to admit that it was somewhat a bad idea to serve the crab after such a gastronomical wonder a.k.a. the Scottish Blue Lobster. Fried and coated with the traditional white pepper, the crab was meaty but my mind just couldn't stop thinking about the lobster.

All of the Scottish lobster and crabs were specially flown in three times a week from Scotland. Compared to the Sri Lankan Crab that most restaurants are serving, the meat of the Scottish Blue Crab was a bit flakier and was more meaty too. The size was on the medium range but was good for more than 6 pax sharing. 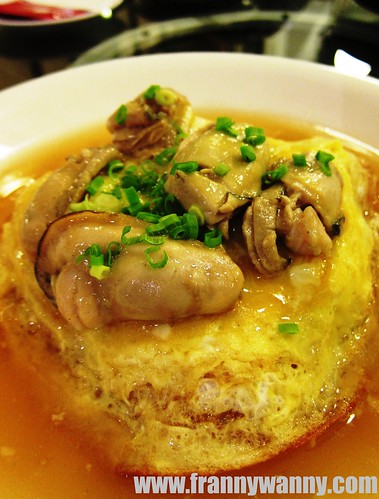 We were all having a grand time as we were enjoying one delicious seafood after the other. The last main dish was the Oyster "Yuan Yang" Hor Fun (S$20). I wasn't really expecting much from this as Hor Fun is a regular hawker dish that I would get every so often. What I wasn't expecting were the following: the humongous size of the Scottish Oysters, the perfect combination of deep-fried and stir-fried hor fun inside the fluffy egg omelet and the wonderful memory that it has left me with. This was my favorite dish of the night and to date, I've been bugging Paul for us to go back for me to have this again. This is definitely a must-try! 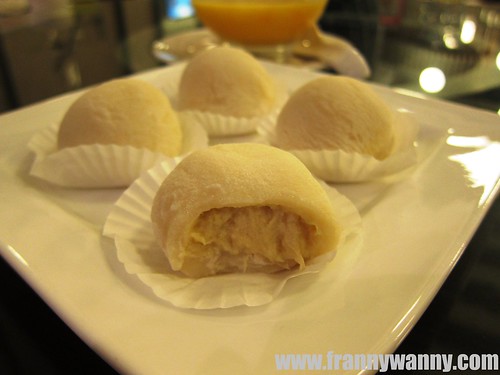 Of course, all meals should end with dessert. We had Durian Mochi which is filled with fresh durian flesh and the mochi covering had a good thickness and texture too. I'm a huge durian fan so you can just imagine how happy I was with this.

In additional to the Anniversary Modern Menu, they also have the Signature Set Menu for the same price. It comes with Drunken Prawns with Hua Diao Wine and Herbs, Garlic Steamed Scottish Bamboo Clams, Choice of the Spicy Seafood Combination or the Creamy Custard Prawns, Sri Lankan Chilli Crab, Crabmeat Pao Fan, Daily Greens and Dessert.