Blackbird Makati at the Nielson Tower

- September 16, 2014
Despite living miles away from home, I'm lucky that I have the Internet and really good friends who keep me updated on the latest happening back home. No, I'm not talking about shameless gossips about poor innocent people but being a true blue foodie, my friends would update me on the latest restaurant that just opened or is currently on everyone's must-eat list. Then, I also have my sister who keeps tab on the newly opened restaurants as well. See, with my friends, my sister and the Internet combined, I got all my foodie news bases covered.

So, months before I flew home for my ninja-like visit to celebrate Papa's birthday, Pan and I were already discussing on where to have dinner this time. You see, my dear Papa is such a creature of habit. Once he loves a certain restaurant, trust that he would want to dine there as often as possible. Lucky for those restaurants as once they win his heart, they automatically get his undying loyalty too. Sadly though, one of his favorite restaurant has closed its doors late last year so we had to go back to the drawing board to decide where to take him and the entire family out for his birthday. 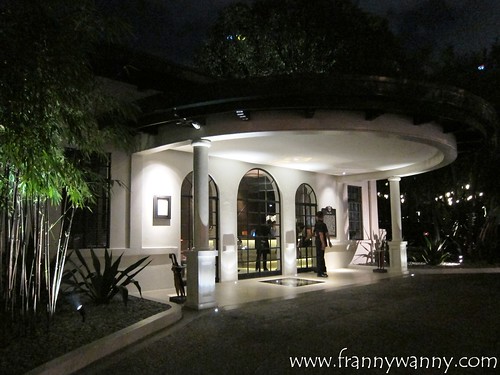 Then we heard about Blackbird at the Nielson Tower. 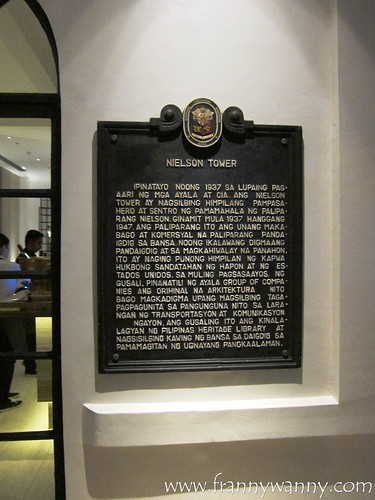 Nielson Tower was formerly called Manila International Air Terminal back in the 30s and was in operation up until the 40s. Today, it's now one of the hottest fine dining restaurants in the city owned by Chef Colin Mackay. The name of the restaurant was said to be after a certain aircraft that Chef Colin loves very much. It's a good thing I learned about this interesting trivia or else I would have probably told my family that the restaurant was named after a famous Beatles song which would have made Papa happy either way since he loves the Beatles very much.

Another interesting trivia that my sister shared as we were on our way to the restaurant was the shape of the building. If you view it from the top, the Nielson Tower is shaped like an airplane with a left and right wing plus a cockpit too. Awesome! I just love restaurants with so much interesting stories to tell. 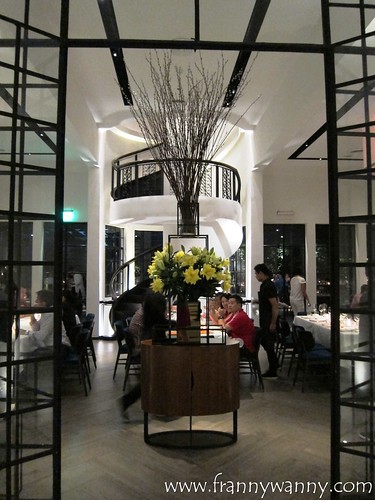 Look at the interior! Since we went for dinner, the lighting wasn't so good but I just love the classy black and white designs and that gorgeous spiral staircase in the middle. Can you spot my soon-to-be brother-in-law E? :) 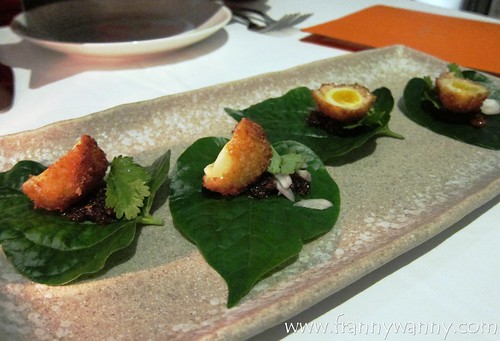 On to the food, I was warned by fellow blogger Jane and her lovely daughter Jana that the serving was quite small. Keeping that in mind, my family just decided to skip our usual sharing system and to just order individual entrees for our main course and to just share the starters. Mommy chose the Prawn Scotch Eggs, Betel Leaves, Coconut Chili Sambal (Php. 280). This reminded us of this delicious Thai starter that we were able to try elsewhere. 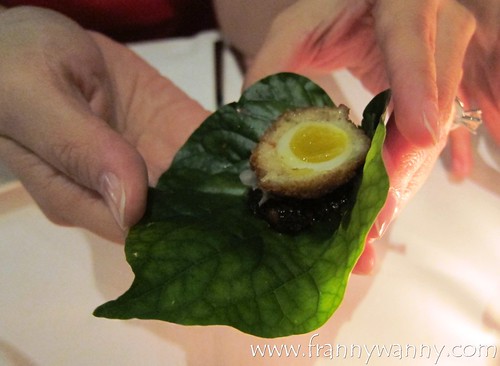 The best way to enjoy this is to wrap the prawn scotch egg inside the betel leaf and to eat it in one go. No additional sauce or condiments required as you'll be surprise how tasty it is. I actually enjoyed this very much and was lucky to get the last extra piece too! Yummy! 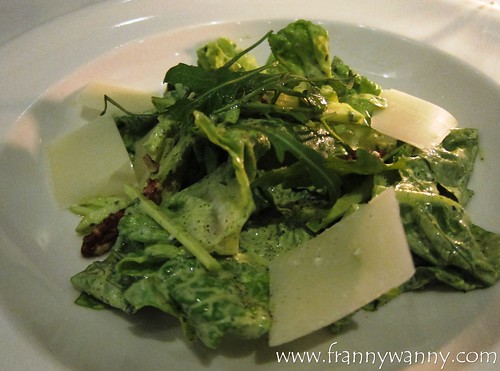 For our salad, Mommy also ordered the Apple, Pecan, Lettuce, Green Goddess Dressing (Php. 390). I have to admit, if you read it as how it was written on the menu, it sounded pretty ordinary. I was initially telling Mommy to go for the crab cake or the soft-shelled crab instead but she was pretty certain that this would be a good choice. Well, as they say: "Mother knows best" and she was right!

We all enjoyed the light yummy salad where the apple slices gave it some sweet juicy notes and the green goddess dressing was creamy but not overpowering. From this point on, I promise not to argue with Mommy and will just trust her choice forever. :)

Here's what we got for our mains. It's so cool that everyone somehow ended up with a different choice so our table pretty much covered a good portion of the menu. 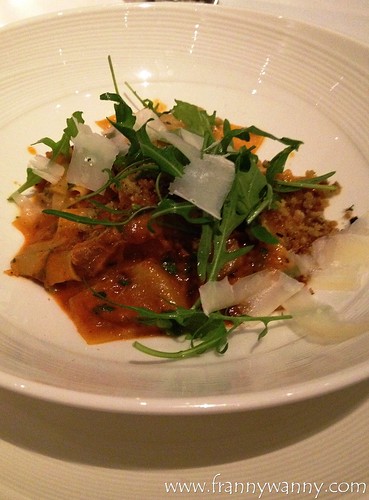 Pappardelle, Duck Ragout, Mascarpone, Rosemary Chili Crumbs (Php. 540)
This is a pasta dish which Paul and I ordered to share. Even after we all agreed to get our individual entrees, Paul and I still went on to share our two dishes for us to be able to try more. The serving was small which most people would probably take note of. The price is not cheap, I have to admit but I guess we also have to look at the quality of the ingredients that was used to create this pasta dish. For one thing, I'm pretty sure the pappardelle noodles were made fresh and not something that Chef just got from the story. The duck ragout was so rich in flavor that it must have been simmered and cooked for hours using the right spices and herbs too. Then, there's the mascarpone cheese which I'm crazy about. So yes, I enjoyed this dish very much and wouldn't mind having this again on my next visit. 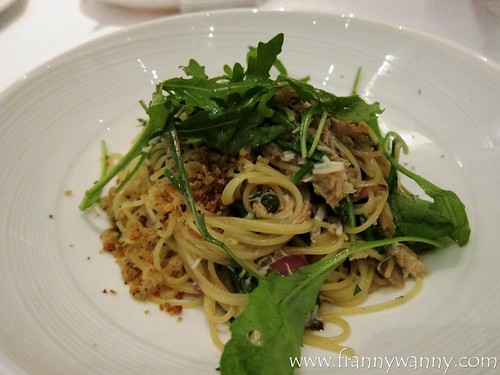 Capellini, Crab, Anchovy, Capers, Lemon, Chili, Watercress (Php. 560)
Another pasta dish that we got for everyone to try. We all loved the al dente capellini noodles tossed with crab meat, salty anchovies and the rest of the ingredients mentioned above. It was very light and clean to the palate. This would go well with your steak or any choice of meat for that matter. 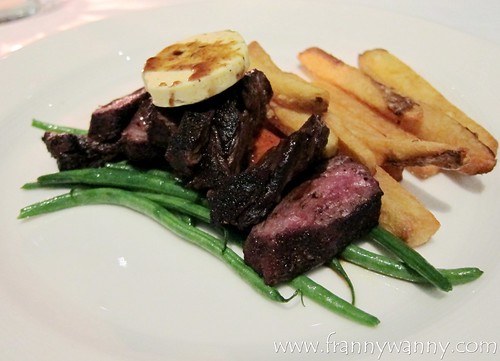 Dry Rubbed Wagyu Hanger Steak, Mustard Butter and Fries (Php. 980)
The birthday celebrant's choice. Papa commented that he enjoyed the tender wagyu beef cooked just the way he liked it. He lessened the butter though has he and Mommy are both really conscious about additional fat or sodium in their food but a small amount was enough to bring this dish to a whole new dimension. We were able to try the fries which were well-fried making it really crispy. 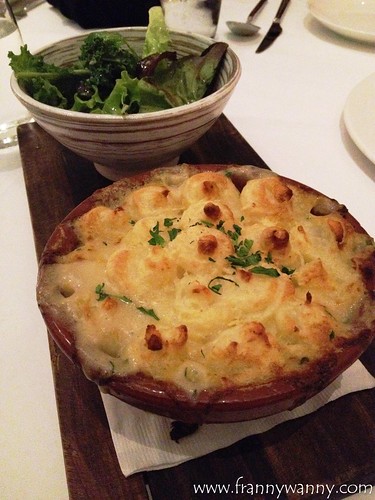 Blackbird Fish Pie Salmon, Smoked Trout, Sweet Shrimps, Creamy Leeks, Potato Crust (Php. 740)
To start with, I had such high expectation for this dish. After all, how can you go wrong with salmon, sweet shrimps and potato right? Sadly, it came out to be really bland that it felt like having huge chunks of seafood coated in cream. That was basically just it. 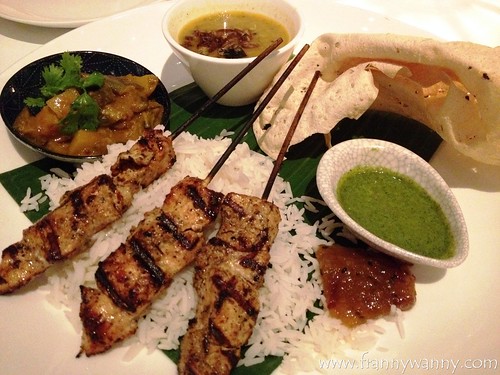 Spiced Grilled Chicken, Yellow Dahl, Brinjal, Basmati, Chutney and Papadum (Php. 780)
An Indian-inspired dish was what E got that evening. I have to say that among all the entrees, this was among one of the most promising ones.  I wonder how come I didn't consider ordering this. Maybe because we have an overload of Indian food here in the Lion City that I just wanted something different for a change. However, from the looks of how Pan and E were enjoying this, I made a mental note to order this on my next visit too. 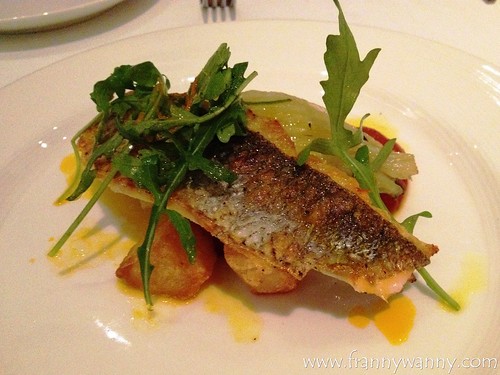 Branzino Fillet, Roast Fennel, Tomato, Potato, Lemon and Rocket (Php. 980)
This was Pan's order and of course, she happily sliced a small portion for me to try. Branzino is also known as European Seabass. Similar to all the other seabass that we've had, we enjoyed the tender, melt-in-your-mouth meat and the skin was actually crispy. Not so bad, but I not quite exciting too.

We purposely skipped dessert as there were three cakes waiting for Papa at home. Next time though, I'll make sure to end my meal with any of the desserts as I heard it's pretty amazing.

As you can see, there were a number of highs and lows during our meal. What mattered the most though was that we were able to make the birthday celebrant happy. He gave his seal of approval for his Dry Rubbed Wagyu Hanger Steak and for our restaurant choice and with that, we gave ourselves a pat at the back.