The Wholesome Table in BGC

- September 22, 2014
The healthy trend has finally reached Manila and it's something that locals seem to be embracing quite well. That's really good as it's high time for people to take a closer look at what they're eating and if this will bring more harm than good to their body. 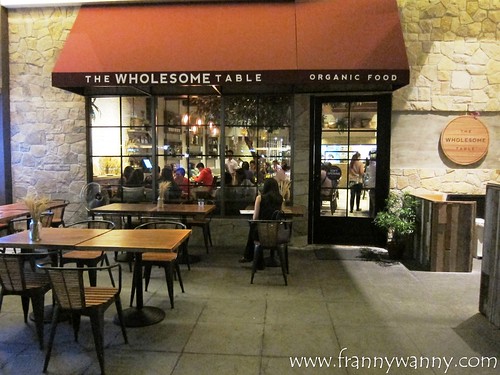 A quick check on Google showed me that heart attack, stroke and cancer remain as the top 3 causes of death in the Philippines. While cancer is more often than not due to genetics, there are a lot of ways to avoid the top 2. No, I won't go preaching about health and wellness to bore you all out. However, I just want to share that moving to the Lion City has made me realize the importance of eating well and keeping a more active lifestyle. It has just been more than a year since we've moved and both Paul and I would shake our heads in disbelief whenever we would come across our photos taken 2 years back. Paul has lost all the unwanted weight and has done an amazing job at maintaining it. I still have half a journey to go, but we share the same sentiment -- guilt. Guilt of allowing ourselves to just eat to our heart's desire when we were in Manila without thinking about the adverse effect that it can do. Not to mention that as we were so happy munching our way around town, we both have lived extremely sedentary lives. You can say that moving here has indeed been a blessing as it served as an eye-opener for us. At least, this eye-opener didn't have to happen when either one of us is in the hospital due to stroke or high blood pressure. That would have been too late. 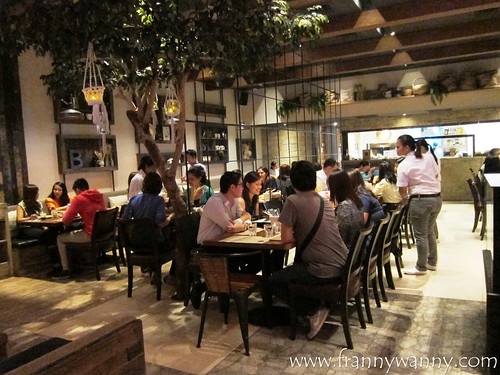 So, when I found out that a new restaurant serving healthy, organic food called The Wholesome Table recently opened in Bonifacio Global City (BGC), I immediately added this to my list of places to visit. Luckily, we were able to dine here during our recent trip home with Paul's cousins and since I wasn't able to research about it, I simply asked my good friend and fellow blogger Spanky on what should we order at The Wholesome Table. Spanky immediately said: "Meatloaf. Don't forget to get the Meatloaf." With that, we made sure to include that in our order list. 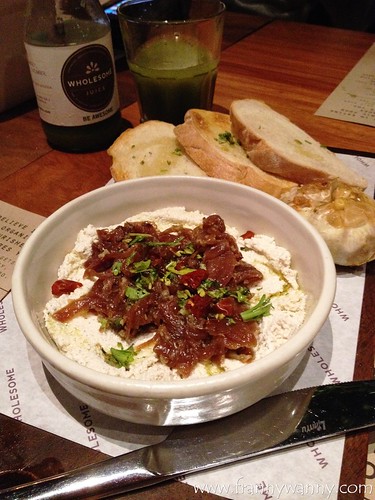 Dinner began with Vegan Cheese (Php. 220). A vegan, dairy-free bowl filled with homemade tofu "ricotta" cheese topped with sweet onion jam. I realized that sweet onion jam goes so well with cheese as the sweet-salty flavors complements each other perfectly. This was so yummy and we had to ask for refills of  bread to spread our cheese onto. 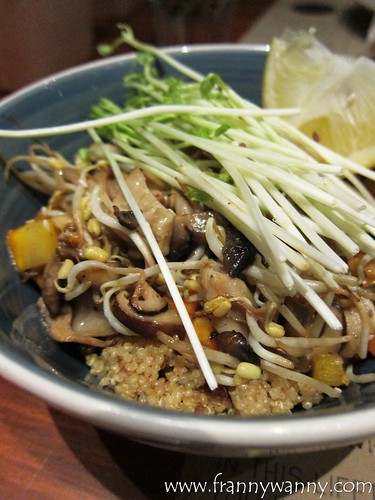 If there's one thing I learned, eating healthy doesn't mean you'll have to starve yourself. Instead, it's a matter of choosing the right things to eat. For example, you can actually still have carbs but perhaps it's wiser to choose whole wheat, wholemeal or high fiber grains. I particularly love quinoa so I immediately chose the Protein Power Bowl (Php. 280) from the menu. It's a vegan, nut-free and gluten-free dish that other than quinoa, it's packed with chickpeas, carrots, mixed mushrooms, herbs and lots of beansprouts as you can see from the photo. It has a very good oriental taste which I enjoyed very much. This was actually my favorite dish that evening. 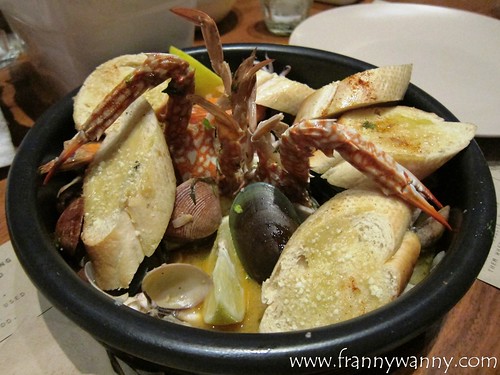 Cousin V wanted to try the Bounty of the Sea (Php. 650) which is a pot filled with fresh seafood stew cooked in light tomato-seafood broth. The size is big enough for 3-4 pax to share. The seafood was okay only I was just able to try the fish as I'm not a big fan of mussels and clams. The flavor was quite weak though given that I would have expected the broth to be richer since it must have been cooked with the seafood for a long time. I also don't get the garlic bread on top which just made the entire dish a bit too oily. 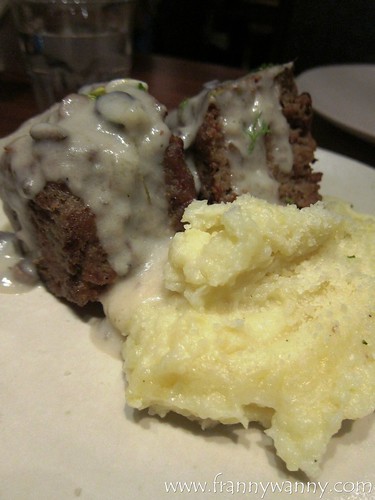 Finally, we had Spanky's recommended Meatloaf (Php. 580). I have to admit that it doesn't look too appetizing but you know as the saying goes: "Don't judge a book by it's cover." I'd also say we shouldn't quickly judge this meatloaf by it's presentation. True, it may have failed in the looks department but the taste totally made up for it. I love the chunky slice of homemade meatloaf that's covered with creamy bacon mushroom gravy. Really yummy and comforting! 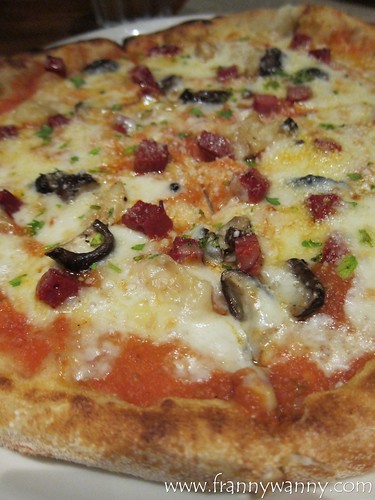 Lastly, the group also got The Barcelona (Php. 690) which was just a-okay for me. I guess I was expecting way too much after reading that this pizza is topped with turkey chorizo, shiitake mushrooms, roasted garlic (!), mozzarella and Grana Padano. It's probably because I also got a rather cold slice or the flavor was a bit muted to be thoroughly enjoyed.

I always believe that one's opinion on taste is subjective however as a number of our dinner companions have rather less than positive remarks about the food, it somehow made me second guess my opinions too. Yes, it's embarrassing to admit this as over-all, I really did enjoyed quite a lot of dishes and at some point even told Paul that I'd love to take my family to dine here. Luckily, Paul immediately sensed my doubts and quickly reassured me that my sentiments were valid and there's no reason to second guess. Yes, taste is indeed very subjective and I have to remind myself that over and over again.

So, will I go back to The Wholesome Table again? Definitely a YES!