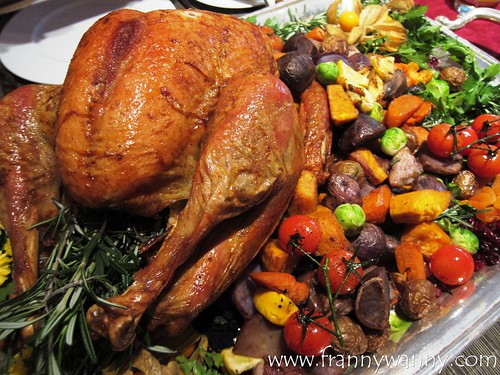 Here's the second installment of my Christmas Feast series in the Lion City! Recently, I had one of the yummiest lunch breaks that I've ever had in the history of my career here in Singapore. It was c/o the sweet folks over at Mandarin Oriental as I was given the chance to be part of the exclusive sneak peek of their Christmas offering. Normally, dining at MELT means indulging to our tummies delight at their famous buffet spread. This time though, I was led towards a long table where fellow bloggers and media friends were seated. Christmas, after all, is all about sharing and having the entire family together for a good meal and that's exactly what we had that day. 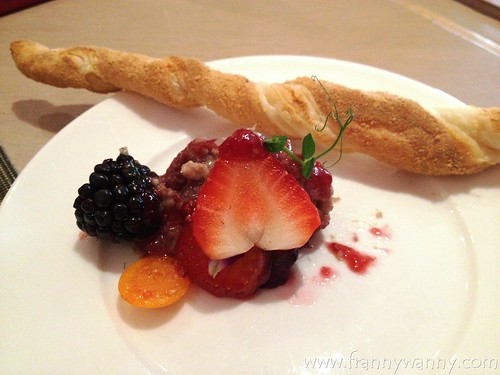 Our meal began with baskets of breadsticks and this huge pot of Duck and Fruit Pate. Definitely an interesting sweet-savory mix where you will enjoy the meaty, smokey flavored duck meat which was topped with a colorful array of berries. It was so good that I couldn't help but get two breadsticks while waiting. I really wanted to have more but seeing the menu, it made perfect sense to save space for the meal ahead.

You'll understand why below: 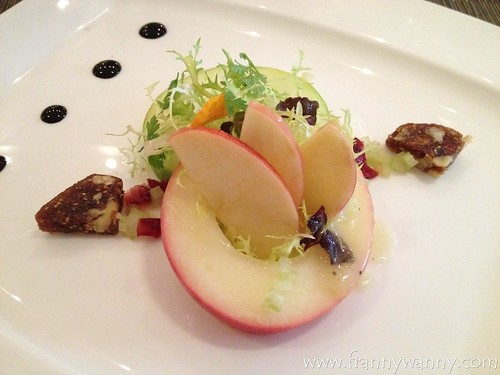 Marinated Apple Salad with Walnut, Cranberry and Cider Dressing
One sign that we will soon be indulging in some serious gastronomic treat is that our salad was really light and healthy. Slices of red and green apples drizzled with a light, citrus-y cider dressing and sprinkled with walnuts and cranberry. It was good but I'm not really a fan of having too much fruits in my salad. I miss my fresh greens. 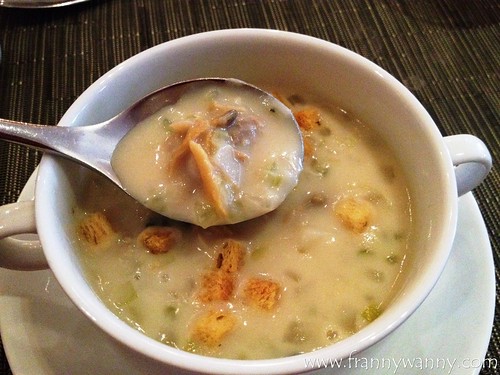 Clam Chowder
The light salad was followed by a creamy clam chowder soup. Since I'm actually not allowed to have clams, I carefully tried a spoonful of the creamy broth and I liked it! It was so yummy. Around me, my lunch mates were raving that the serving of clams was so generous that they'd get not one, not only two but a good amount of clams in every bite. 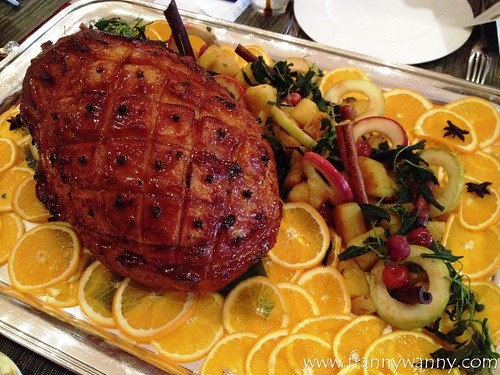 Maple Glazed Ham
We had two stars of the show that day and this was one of them. I love how tender the sweet ham was and the pineapple sauce served on top truly sealed the deal. It was DELICIOUS and no Christmas lunch or dinner at MELT will ever be complete without it. Be sure to look out for this and please help yourself to as much ham as you can enjoy. 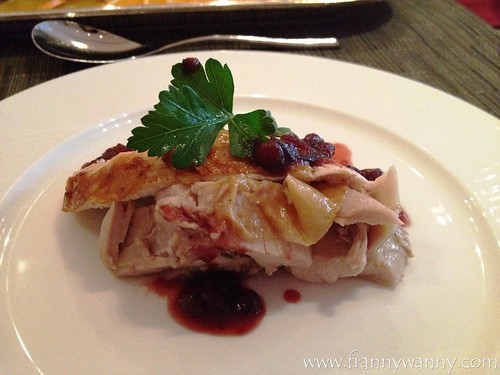 Traditional Roasted Turkey with Giblet Gravy and Cranberry Sauce
The second star was the turkey which sat so lovely at the center of the table. It's interesting to note that turkey seems to be a popular dish for Christmas here. I loved how tender it was which shows how well the turkey was roasted leaving the inside so juicy and the skin with a slight crisp bite.

Of course, what's a turkey meal without the sidings right? 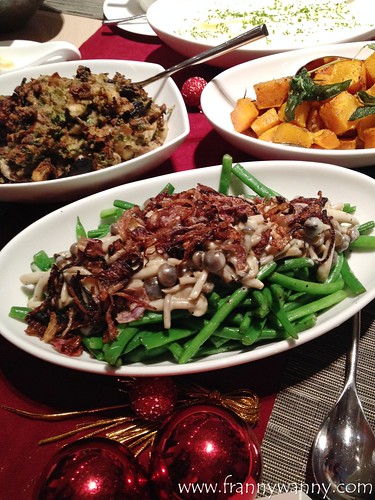 I really enjoyed the Beans with Wild Mushroom which was cooked in a creamy sauce reminding me of my favorite creamed spinach. I know it may not be the healthiest veggie this in the world but hey, if I were to indulge, I'm definitely having a plateful of this! The crunchy beans and the delicious straw mushrooms made this so irresistibly good.

We also had the Traditional Chestnut, Mushroom and Pork Stuffing which was good as well. It was a bit too filling though as the chestnuts and pork made the texture extra chunky and heavy to the bite. 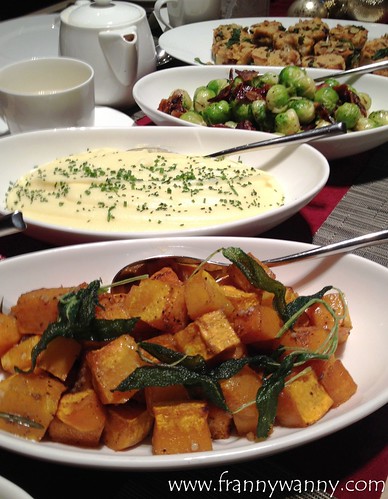 One of the biggest surprise that day was the Baked Sweet Potatoes which was yummy! I initially wasn't paying much attention to it as I was focusing on the beans and Truffled Mashed Potatoes but when a fellow blogger mentioned that the Sweet Potatoes were her favorite, I tried a piece and immediately agreed with her. It had a sweet taste which was probably caramelized with sugar and baked to perfection.

Then there was the Truffled Mashed Potatoes which was also one of my favorites as I love anything with truffle oil. I'm lucky that the bowl was conveniently placed in front of me so you can just imagine how many serving I helped myself with that day. Let's just say that I had to ask my seatmate to push the bowl away from me as I just can't stop scooping more.

We also tried the Buttered Brussels Sprouts with Crispy Bacon and the Roasted Butternut Squash which paired perfectly well with both the Turkey and the Honey Glazed Ham too.

It was indeed a delicious and good lunch where we could really feel that Christmas is truly just around the corner. Well, what's a holiday meal without desserts right? 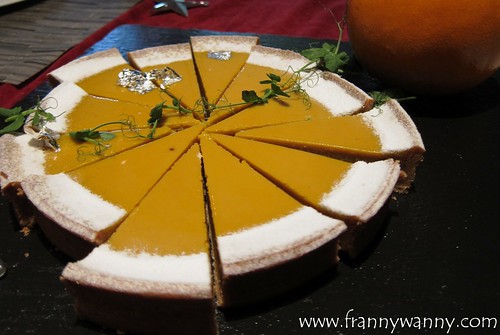 We ended our lunch with a slice of Thanksgiving Pumpkin Pie which was yummy! The creamy pumpkin filling with a hint of cinnamon made me wish that I can have Thanksgiving every single day. That alone is something I will forever be thankful for. 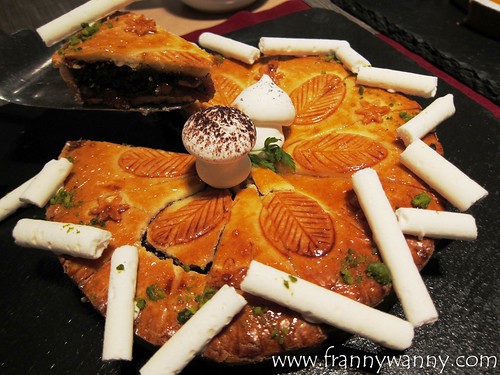 Aside from the Pumpkin Pie, we had the Minced Meat Pie which unfortunately I'm not a big fan of. It's a traditional English dessert served during the holidays and it's filled with a mix of sweet fruits and spices. The taste somehow reminds me of the traditional Fruit Cakes that our parents would receive every single year.

It was a good afternoon spent meeting new friends and seeing the ones I've met before. The best thing about it is we had this delicious spread to celebrate the coming holiday season. That, my friends, is the most beautiful thing about Christmas. ♥

You can enjoy this pre-Christmas celebration at MELT from December 8 - 23, 2014.