- September 19, 2019
It was been said so many times before that being a mom is no easy feat. Put aside all the sleepless nights, the big and small sacrifices that you have to do, the pain, the anxiety... lately, I realized that no matter how hard you try to shield your babies from all the viruses in the world. That's just not possible.

My twins have been falling sick for the past month. They caught a bad cold three weeks ago and quickly recovered from it then Paul got sick and just as he was about to recover, my twins caught the bug AGAIN. It's one of those moments that I just want to pull my hair and raise my hand to surrender. I love the rainy season but I got to admit that together with it comes the rise of flu and even more scary diseases like Dengue.

I still remember how awful I felt when I had dengue. I was 7 years old then and I remembered  drinking Slurpee one afternoon with my cousin and the next morning I woke up with really bad headache, high fever and a painful tummy. I initially thought the Slurpee was dirty. I couldn't keep anything in my stomach as I would throw up every so often and my fever just kept going up and up. Eventually, mommy said that she needed to take me to the doctor and since I was so scared of doctors, hospitals and needles, I even tried to jump up and down to prove to her that I was ok but that led to me collapsing with nausea and throwing up in the process which clearly confirmed my mom's suspicion that I wasn't okay.

I was confined in the hospital for a week with nurses taking my blood twice a day. It was horrible for someone who was deathly scared of blood and needles. I remembered how terrified I was when a group of nurses had to hold me down in order to insert the IV needle in my hand and back then, the needle wasn't the flexible/bendable kind so I had to wear a cardboard splint. Since then, I told myself that I have to be more careful towards mosquito-breeding areas and I really hope my kids will never have to go through that same experience as I did. 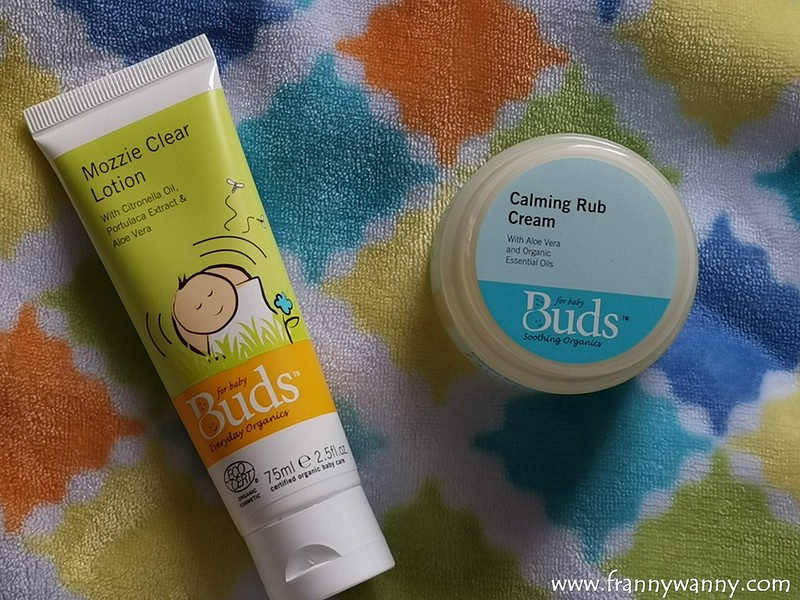 This is why as soon as we started taking them out of the house, I would make it a point to put mosquito patches on their onesies and on their stroller. I even hoarded boxes of these mosquito patches from Singapore and while it worked so well on behave babies, I can't say the same for active toddlers who can remove their patches from one another (team work talaga!) and would stick them on the wall like stickers. Sadly, the commercially available mosquito sprays are still not suitable for kids 3 years and below so it was just great that I chanced upon Buds Baby Organics at Momzilla early this year.

The Buds Baby Organics Mozzie Clear Lotion (Php. 579) makes use of natural ingredients like citronella oil, aloe vera, shea butter and olive leaf extract making it 100% safe to be applied on to my baby's skin. I'm very careful about this as I do not want them to start having allergies or to be exposed to harmful chemicals which their little body might not be ready to take.

I noticed that the lotion dries up quickly and it doesn't leave your skin feeling oily or sticky. I'm very particular with this as my toddlers play around so much that sweat + sticky skin can make them feel very uncomfortable. The scent is also very pleasant and none of the strong kerosene-like aroma. 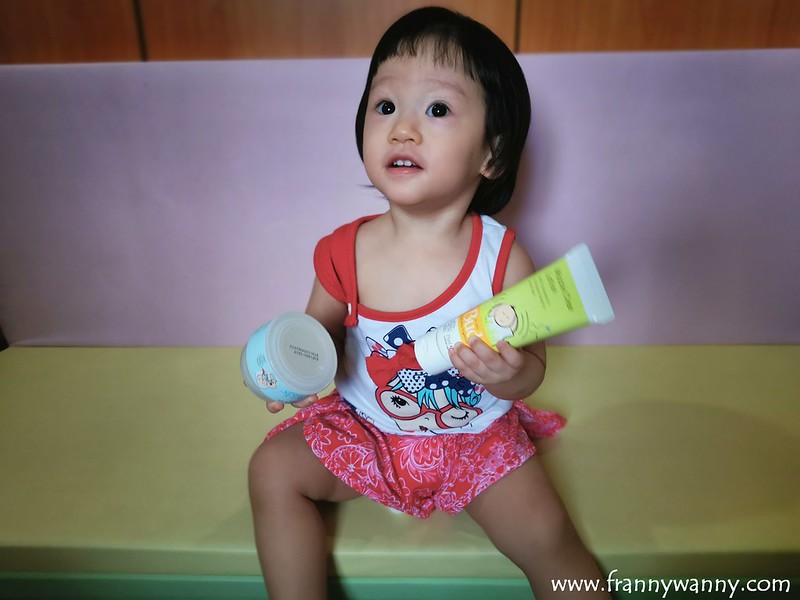 We also tried the Calming Rub Cream (Php. 759). I have kept this in our toiletries box for some time. It's one of those products that you know will help you later on so you get it and keep it in hopes that you'll be well-equipt when that right moment comes. J is very colicky even as a baby. I remembered how he would wail so loudly at the strike of midnight and even after checking his diaper, attempting to breastfeed him.. he still continues to scream and cry at the middle of the night. Later on, we realized that it's because he had colic and it would hit him strongly at night. I got to admit that I deeply relied on my nannies so we used manzanilla oil on the twins as this is what the elders have been telling us to use. It was only after our pedia warned us about the negative effects it has on a sensitive baby skin that we immediately stopped using it on the twins.

Now, the Calming Rub Cream has the right formulation that relieves our babies from a gassy tummy or indigestion problem. It's made of peppermint, ginger and fennel oil to help release the gas "trapped" inside and it has lavender oil to keep baby relaxed all day and night. I used this shortly on my twins as they eventually outgrew ther colic but I happily passed on my tub of cream to my baby nephew which helped him so much too.

Our skin is our body's biggest organs so let's not take this forgranted. Whatever you apply on your skin can easily be absorbed and can make its way to your organs. This is why we always have to keep our skin nourishes and hydration every single day. I am very impressed with Budy Baby Organics because of its cute packaging and natural ingredients that give me the peace of mind as I use it on my babies.