- July 29, 2020
If there's such thing as "by moms for moms", Matt's Waffles would definitely be "by a kid for more kids" I first heard about this brand of homemade waffles from my cousin-in-law V. She told me that they have been buying from them and even served this as part of the birthday celebration of my niece L. It was easy to find them on social media and I later found out that Matt's is actually a 10 year old boy who happen to be the talented little chef behind these waffles. I have yet to know the full story how little Matt got into making waffles but my guess is probably because it's one of his favorite snack/breakfast/thing to eat.

Anyway, one thing that caught my attention is that it's made with the best ingredients. I'm not talking about truffles and Wagyu beef but it's all about choosing good quality ingredient that ensures us that these waffles are safe for kids to eat -- fresh eggs, fresh milk, butter and olive oil. As a mom, I've become to be more discerning in choosing what I feed my twins and this one passed with flying colors. I started out with 3 packs of 6 waffles each. I initially thought, I had too many waffles and prayed that none of the bags will go stale. 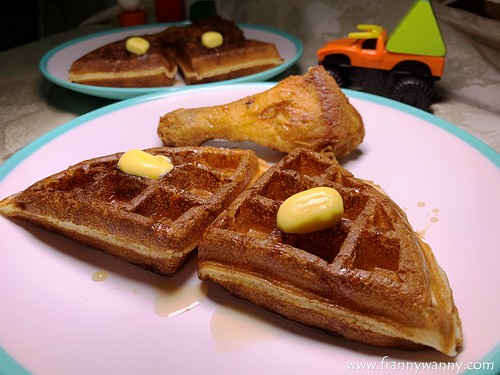 The following morning, I opened my first bag and heated it up in the oven till it was crunchy outside and remained soft inside. I served this plain with just a light smear of unsalted butter and a few drops of maple syrup. On their first bite, my twins gave me their thumbs up sign -- one that I rarely see especially early in the morning. I just had a small piece of waffle as I normally taste every thing that I give them and I thought it was yummy. Wow! My kids liked their waffles that they initially had two slices each and later asked for more. Each consuming 2 and a half slices of waffles each. That's a lot as they normally would just have a piece of bread or a bowl of cornflakes for breakfast. It was just Day 1 and I was already impressed.


A few days after, I didn't know what to prepare for dinner and since our reliable cook R made the twins' favorite fried chicken, I opted to pair this with waffles instead of rice. Chicken and Waffles is one of my favorite dishes especially on Sundays. Why Sunday, you might ask? This is because Paul and I used to go to this Southern American restaurant in Singapore and on Sunday brunch they serve the best Chicken and Waffles in town. So good that it's quite big in size but we would always have a plate each. No sharing for something that good.

I'm glad that my twins enjoyed their homemade Chicken and Waffles. No gravy for these two instead I drizzled a bit more maple syrup also on the chicken and they finished off their plates in no time. That's two points already for Matt's Waffles and I'm one happy Momma! 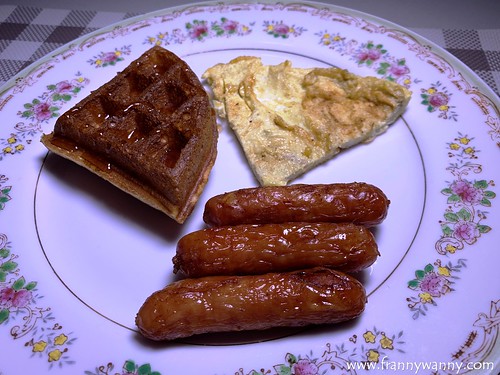 We were down to our last bag of waffles this morning and while the twins still had their waffles plain, I decided to jazz it up for Paul. He has been complaining that he wasn't able to have much of Matt's Waffles so I decided to set a slice for him. For breakfast today, I had Matt's Waffles with Japanese sausage (it wasn't pan-fried very well thus the wrinkled skin) and some scrambled eggs. Finally, got the hubs to enjoy his breakfast and once again, the little ones asked for an extra piece of waffles too.

Prior to writing this entry, I actually have placed my order for another batch of waffles. Looks like we found a gem and I will make sure to have a few bags stored in our freezer as Matt's Waffles has been such a lifesaver especially when I'm stuck and I have no idea what to prepare for the kids. It has also proven to be so versatile that it goes well with any breakfast meat, egg, with something savory like fried chicken or as part of your dessert with a big scoop of ice cream. In fact, you can also have Matt's Waffles as a sandwich instead of bread. I'm really planning to make my own Eggs Ben using these waffles someday.

One last thing, one pack is only worth P200 and it gives you 6 quarter slices of waffles already. It's such a good deal, if you ask me.