- July 23, 2020
I finally did it! For years, I've been wanting to make stuffed veggies. When I was growing up, whenever we would visit Hong Kong, we would always make sure to have dimsum for Sunday lunch. Somehow, it's a common practice for locals to go for dimsum brunch where the entire family would feast on baskets after baskets of the best dimsum creations paired with their choice of hot tea. They would eat for hours as this is the time when the family also comes together. There would be a handful of aunties pushing the wooden dimsum steam cart and some would have the deep-fried cart too. As you order, they would put a stamp on a piece of card and that's how they would later tally your total bill. It was definitely one of my best childhood memories and the reason why I love dimsum so much. 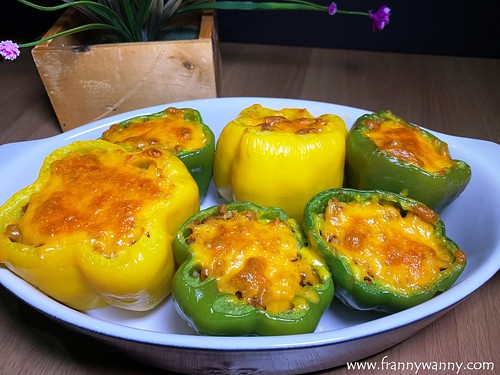 Anyway, during one of those dimsum brunches, I remembered having Stuffed Bell Peppers with Minced Meat. It was so good. Being a kid then, I was never fond of vegetables but if you stuffed it with really flavorful meat and steam it till it has that nice soft bite, then I would definitely consider asking for more. Since then, I've had a variety of stuffed vegetables. From bell peppers to zucchini, to bitter gourd (ampalaya) and more. So, when I started becoming more creative in the kitchen a couple of years ago, Baked Bell Peppers was already part of my wish list. 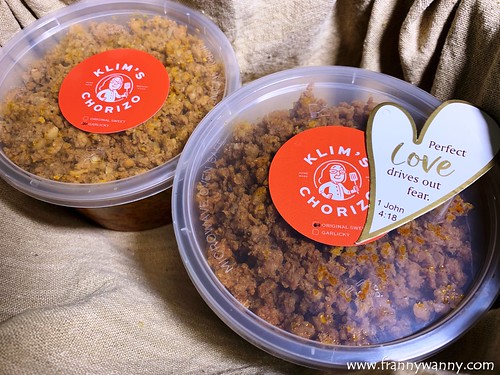 Fast forward to today, I decided that I really should try it but I'll make it my way. So I bought a kilo of colorful bell peppers (mix of yellow and green) and got the rest of the ingredients ready too. One of the key ingredients was minced chorizo which I'm lucky to get from my dear friend Sitti. She started her home business called Klim's Chorizo where she sells Bacolod-style naked chorizo and chorizo patties made from her own kitchen.


It comes in two flavors -- Original Sweet or Garlicky. The sweet was my personal choice as it went very well with this recipe. It was also well-received by the #AngTwins so that's a plus too. However, the garlicky flavored chorizo is perfect for a night of sangria, really good aglio olio chorizo pasta and perhaps some cheese. It's really so versatile and easy to incorporate in any dish for any meal of the day.

So why bell peppers? Simple. It's high in Vitamin C -- one thing we all need given how wide spread the virus is now plus it's officially the rainy season and the last thing we want is to be down with cold or cough. I also want to start to train my kids to eat veggies and I figured that making it more flavorful might just do the trick.

Without further ado, the recipe to my Stuffed Bell Peppers with Chorizo Fried Rice.

What you have to do:
1. Cooking the bell peppers
- Slice the top portion and remove the seeds and core. You can rinse the bell peppers under running water to clean the outer part.
- Arrange upside down on a baking pan
- Fill the pan with 1.5 cups of water
- Add in 1 tablespoon of oil
- Baked for 25 minutes at 170 degrees Celsius (for 350 degrees Fahrenheit)

2. On a stove top, saute some minced garlic be careful not to brown them. 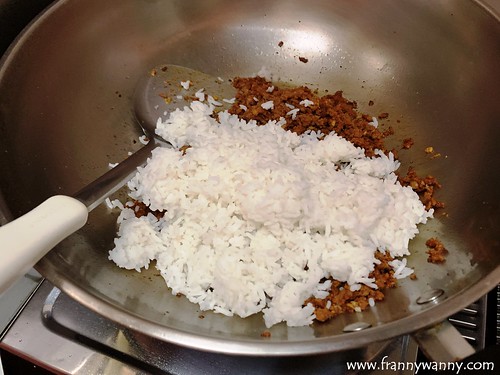 5. Make a small well and add in the egg.

6. Season with salt, pepper and herbs. 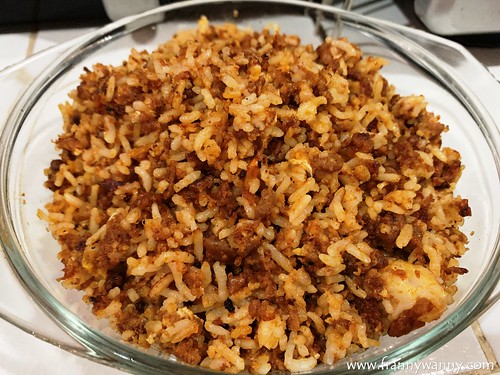 7. Take the bell peppers out of the oven and drain very well. Fill each bell pepper with fried rice.

9. Bake for 10 minutes or until the cheese melts. 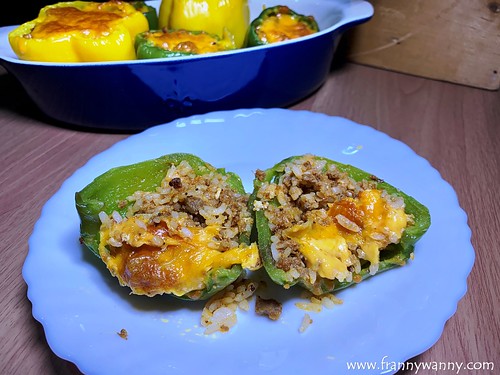 The verdict? The twins ate their bells peppers and that's definitely a win in my book! It's very easy to do and it makes use of easy to find ingredients so it's one that you can do even if you're in a rush. You also don't need a convectional oven. An oven toaster will do too.

Try it and tell me what you think in the comment section below.