Give in to Giving this Christmas (Part 1)

- November 21, 2008
Last Wednesday, I took a break from my regular visit to the Green Siren to attend an event organized by its friendly neighbor otherwise known as The Coffee Bean & Tea Leaf (CBTL).

Paul and I made it to their store at the Bonifacio Highstreet on time but we were surprised to see the store already buzzing with people. Most of the tables were already filled up and as we inch our way in saying hello to fellow bloggers, I began to wonder what was going on. 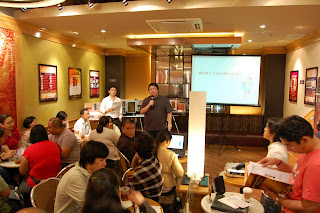 We took a closer look around and realized that on each table sat a couple of representatives from various NGOs and organizations in the metro. There's Paul's favorite organization named PAWS, which is a group that fights against animal cruelty and alleviate these animals from pain, fear and suffering from maltreatment. Then there's the Cartwheel Foundation which stands firm on its advocacy to bring education to the country's indigenous communities. They focus on Early Development Education which involves kids from 2-7 years of age. I also saw a couple of representatives from Kythe who reaches out to kids with cancer and who makes sure that the children continues to make the most of their young lives.

These are just three of the more popular organizations that Paul and I have easily identified and have a little bit of knowledge about. As we helped ourselves to a couple of sandwiches and pastries prepared by CBTL, we moved around the store and began chatting with more organization heads from groups such as the Philippine Cerebral Palsy Inc and Kagabay. Personally, I was so moved and inspired during my chat with these two organizations because I can't believe that people would actually leaves their corporate jobs to be able to create a bigger mark on the community by further reaching out to help a cause. Our discussion were interrupted when we were told that the program is about the start. 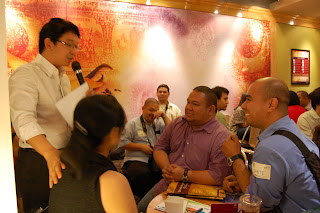 Funny and lively host RJ Ledesma, welcomed everyone and explained why there were twelve organizations present that evening. This year, Coffee Bean and Tea Leaf is launching their newest holiday campaign entitled The 12 Cups with The Coffee Bean & Tea Leaf: Give in to Giving Promo and they are encouraging everyone to join. 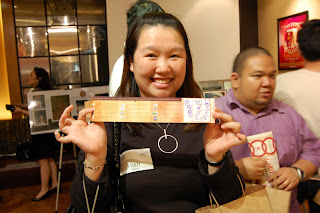 Once the card has been completed, the customer gets a chance to choose which organization they would like to support and as CBTL's token of gratitude, the customer will receive a Limited Edition notebook and a certificate recognizing the customer's contribution to the organization.

How's that for a perfect holiday charity project? I was definitely impressed by two things: First, the fact that they will give the customers the chance to choose which organization to support and Second, the beautiful notebooks bearing the artworks of 12 different local artists.

During my brief chat with Mr. del Rosario, I can't help but express how impressed I was with the project. I firmly believe that choosing an advocacy to support is a very personal thing. By giving the customers 12 different organizations to choose from, it makes their contribution more meaningful and is done whole-heartedly.

Next: the 12 organizations that you can support this Christmas
CBTL christmas coffee food geiser maclang