- August 29, 2009
I remembered a recent interview that I've had with a friend. She asked me what I feel would be the food trend for next year -- I paused for a minute and told her that I feel that people would continue to go healthy.

With the rising popularity of healthy food alternatives, organic veggies and of course the ever famous frozen yogurt, I told my friend that I feel that everyone will eventually catch on and live a healthier eating lifestyle in 2010.

A couple of days ago, I attended the media launch of Figaro Coffee as they presented the Raspberry Chai Swizzle and the Cinnamon Chai Latte.

Partnering with Monin syrup, the team created a new line of healthy drink options to customers who gives top priority to the nutritional content of their beverage. By introducing Chai, which actually means tea in many parts of the world. It brings back the century old history of drinking tea in India where Chai Masala originated.

While listening to our friends from Monin tell us the process of producing the syrups and eventually working closely with Figaro to create the new drinks, we were also given the chance to try these two drinks ourselves. 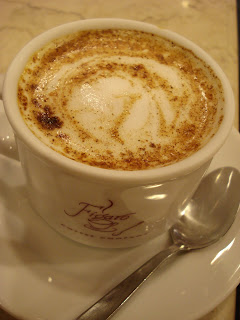 First came the Cinnamon Chai Latte. I must admit I was immediately drawn towards this hot drink because of its aroma and the fact that I love cinnamon. Taking careful sips, I enjoyed the sweet cinnamon flavor that's mixed with milk and chai syrup. Note that since this drink makes use of syrup which as we know is high in sugar, expect that it may be a tad too sweet for your taste. To play safe, be sure to tell your barista to go easy on the syrup when preparing your drink. 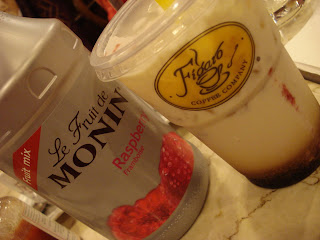 The second drink was the Raspberry Chai Swizzle. It's actually my first time to try this type of drink combination and I was excited to take a sip. This is an iced drink which is perfect especially on a warm day. This drink has a mixture of milk, real raspberry puree and of course, Chai syrup. I enjoyed biting into the tiny raspberry bits as I indulge on my second drink. 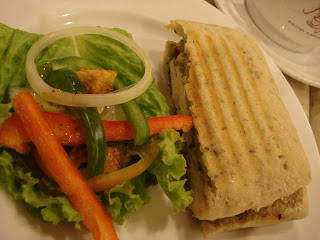 While enjoying, we were served with warm sandwiches which, as we were told, complimented the sweet chai drinks. I liked my Grilled Chicken Sandwich which has a generous serving of pesto and melted cheese on top of the juicy chicken meat. It has a strong flavor which I think matches well with the Raspberry Chai Swizzle.