- November 08, 2010
To welcome Jane back from her Hong Kong trip and also as a send-off for Richard, Irene, Grace and Lauren who flew to Cebu the next day, we agreed to have dinner at Hermanos Taco Shop along Granada street one busy Friday evening.

This was from a recommendation given by my sister's friend who told me that their burrito and tacos are better than Ristras. Since I'm a fan of Ristras, this I have to see for myself.

The shop is located within a gasoline station so parking is pretty ample. There are two doors leading to the shop, one leads to the dining area and another to the counter. Quite funny, don't you think?

We were one of the last to arrive as traffic was horrible that Friday night. Still the Club warmly welcomed us and advised us to go and order as they were already happily enjoying their Mexican dinner. I was craving for meat, meat and more meat so we got the Carne Asada Chips (Php. 320) and shared on a BBQ Beef Burrito (Php. 285) with extra Sour Cream. 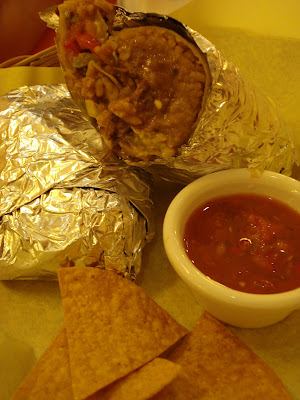 The burrito came first and I found it a bit spicy but it was pretty bearable that I finished my share with lots of sour cream. I love the warm tortilla and how soft it was, still there's that pull that I get in every bite. I love my tortilla that way. The beef was very generous and the sauce was pretty flavorful.

On the sour cream, Jane and I agreed that it tasted different. It somehow tastes like yogurt that we initially were worried that there must be something wrong with their sour cream but after a couple of re-assurances  from the mommies in the group namely Rowena and Irene, we continued to enjoy our own cups of sour cream. 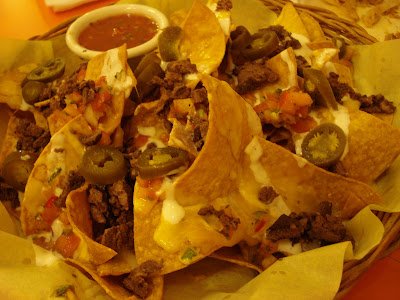 The burrito was indeed filling and my jaw dropped at the sight of the Carne Asada Chips. It was like a mountain full of chips, Carne Asada, jalapeño, tomatoes and a lot more. I even told Abet, who was sitting beside me, that this is too much and it looks like Paul and I will have to take half of the chips home.

Well, that was before I bit into the chips and as we continued to chat and joke around, our Carne Asada Chips platter was almost empty... not by Paul but by yours truly who enjoyed munching on what seemed like homemade chips and fresh salsa. Needless to say, there was no need to take any Carne Asada Chips home. :) 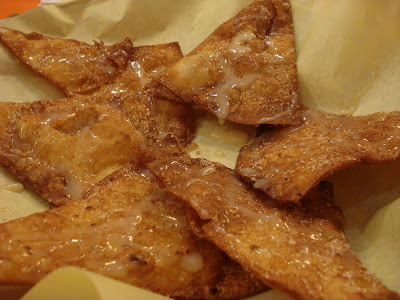 Sensing our enthusiasm in trying out their food, the kind owner sent us plates of Cinnamon Crisp (Php. 95) for dessert. I wasn't able to try this anymore because around this time,  I was so full from the burrito and the Carne Asada Chips that it was Paul who enjoyed our share. It's like deep fried tortilla covered with cinnamon and sugar and drizzled with condensed milk. This is definitely something kids will love and adults will continue to crave for.

Well, I still love Ristras for its delicious nachos filled with salsa, guacamole and sour cream. The location is also more accessible to my home but Hermanos is the place when you're craving for authentic tacos. On my next visit, I will definitely try the Rolled Tacos that looks so good as my fellow bloggers were enjoying it. How I wish Hermanos would open till the wee hours in the morning as this would be a perfect go-to place after a night out with friends.

*p.s. while in the area, why not drop by JEH Car Wash to treat your car to some scrub and wash. It's just along Castillas street, a stone throw away from Hermanos. It's on the same street as Elorde Gym.
burrito carne asada chips cinnamon crisp food granada hermanos taco shop mexican nachos quezon city sour cream the club