February 08, 2011
I love to cook and I love to eat, put it together and for sure, I'll have a great time during a shabu-shabu dinner! However, more often than not, it's my husband Paul who takes the center stage in the cooking arena. Take Amah's (grandmother) birthday two week ago for example where my family decided to head to Green Maris for an intimate shabu-shabu (hotpot) dinner. While most would probably expect the ladies in the family to stand up and cook all evening, it was in fact the men namely Kongkong, Aku, Kuku and Paul who made sure that all ingredients made it to the pot and they also were the ones putting all sorts of meat and seafood into our respective bowls. Such gentlemen we have in the family. :) 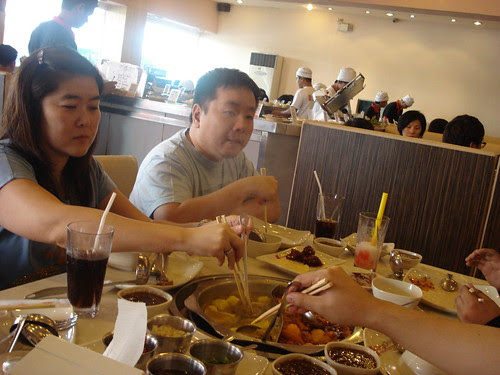 Fast forward a week after, Paul and I joined half of the Club at King One Rotary Hot Pot in Macapagal Avenue where we went prepared with an empty stomach ready to enjoy an assortment of meat, seafood and more! I'm glad that Richard and Irene, who have dined at King One more than 10 times (yes 10 times!) already walked us through the process. 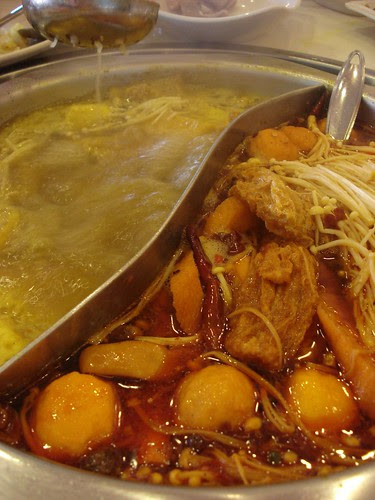 First, we chose our soup stock -- Paul and I sat right at the middle of two tables so we had the privilege of enjoying 4 types of soup stocks! In Paul's side, they had Curry and Szechuan (spicy) soup while on my side, we had Satay and Curry.

One thing that makes King One different from other shabu-shabu restaurants is their rotary belt that holds all of the ingredients that you can get for your soup. We were quite a big group so we sat far away from the rotating belt but we were given a checklist where we can just tick off the items that we'd like to get. Very convenient! 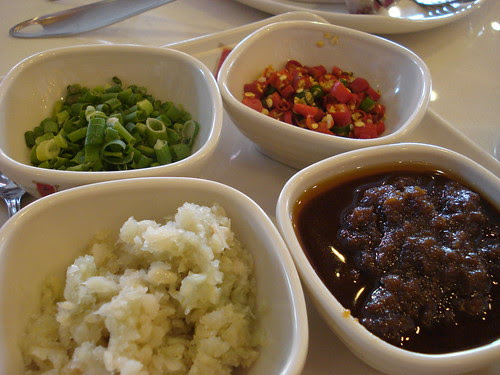 While waiting for our soup to be prepared, I was busy mixing up my sauce. No shabu-shabu meal is complete without my dipping sauce. It adds more flavor to everything and for garlic lovers like me, you can put in as much chopped garlic as you want! My special sauce consists of lots of garlic, spring onions, satay and I added a few fried garlic too!

Our soup has arrived and we began throwing in our ingredients starting with the corn and taro to add more flavor to the soup followed by the different balls -- meat, squid, fish, lobster, beef with cheese and my favorite -- the mozzarella balls! 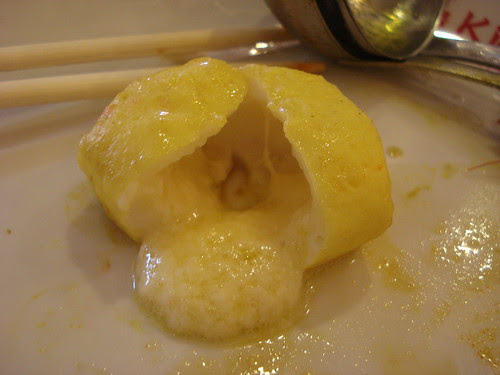 Believe me, we had a delicious meal. Enjoying lots of thinly sliced lamb, premium cuts of US beef and all my shabu-shabu favorites! In addition to this, your eat-all-you-can meal comes with a choice of any side order. We got the Yang Chow Fried Rice to share and I was surprised that it's actually refillable! I think we had a total of three refills of rice that day! :)

While drinks is not included in the meal, do try their Lychee Shake (Php. 65) which is also refillable! I love the not-so-sweet lychee with chewy jelly at the bottom. Paul loved it so much he had a total of three refills of the shake and was actually planning to go for another round if only the server remembered to return his glass with his fourth refill.

I highly recommend that you go early to get a good head start and to be able to try the popular items available. We were there at exactly 12 noon and they were already out of fresh scallops by then.

After enjoying your meal, make sure to save space for dessert as you'll be given a refreshing fruit platter to cleanse your taste buds. We enjoyed the juicy sweet watermelon and the equally juicy yet tangy pineapple. This was a surprised and Paul and I were both very impressed that we were really getting value for our money!

King One Rotary Hot Pot is the sister restaurant of the popular YakiMix which I have yet to try myself.  We loved it so much that it's likely that we'll be back next week!