February 23, 2011
Greetings from cold and sunny California! After 16 long hours of trying to keep still and stay as comfortable as we can in the plane, Paul, Leah and I finally made it to the U.S.A.!!! While I'm trying to decide whether to catch some sleep as it's already 3 in the afternoon here and run the risk of staying up the entire evening later or to just withstand the urge to shut my heavy eyelids to be able to enjoy a deep slumber later, I think I'll just share with you how our transit was via Delta Airlines.

First and foremost, I love the service. We were well taken cared of by the flight attendants at any given point of the flight. I particularly liked one Chinese flight attendant who was very attentive to our needs. Upon knowing that Paul and I are Chinese too, she began speaking to us in Mandarin which I struggled to respond in small broken phrases and relied on my husband to supply the missing words. (Oh, how I wish I took my Mandarin classes more seriously tsk tsk)

Secondly, the in-flight entertainment was pretty ok too. I watched GLEE though it was an old season and Big Bang Theory twice today. Currently LSS-ing on the GLEE songs. The movie was just a-ok, since we didn't have our own TV screens in the Economy section, I had to just watch the big screen in front. Only one movie was shown from the flight from Manila to Narita, Japan and three in our second flight from Japan to Los Angeles, USA. It would have been better if we had our personal screens to be able to choose the shows and movies that we'd like to watch.

Lastly, the food. I had very little expectations of Delta's food as I haven't received any positive raves about it not were there rants. Let me share with you our menu line-up for today:

We were given two breakfast choices: 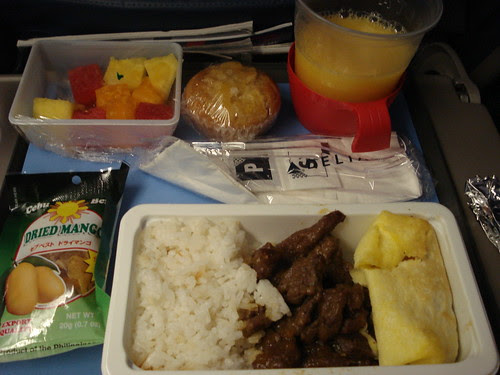 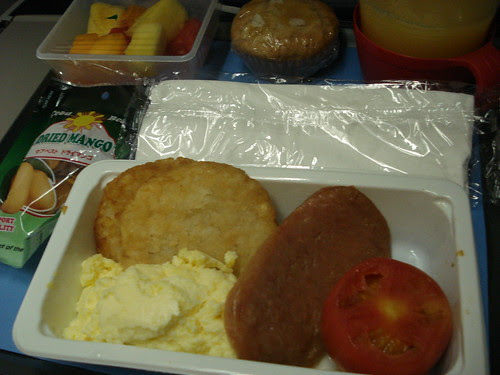 Paul got the Tapsilog which he said was quite tender and good. While I enjoyed my spam, scrambled egg and hashed browns. I find the potato too mushy though. Nonetheless, it was a pleasant meal. 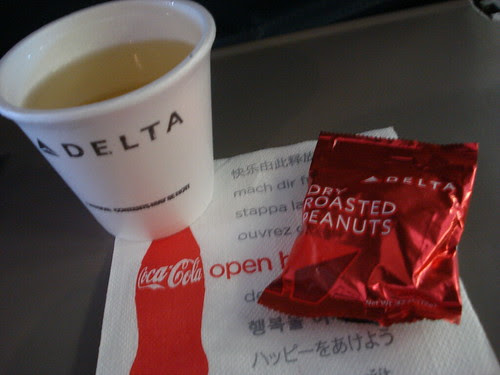 I think I did nothing but to eat in this flight. From the moment we sat down, we were given a pack of nuts and our choice of drinks. I had a heavy lunch at the Narita Airport so I chose to have Japanese Green Tea. Delicious!

Shortly after, we had "dinner". In Manila time, it was just 5PM but yes we were all having dinner. It has been a while since I had this much food onboard a plane and I was excited upon seeing the menu. 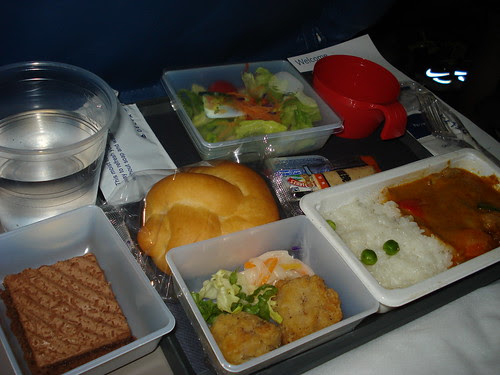 As usual, Paul got the Bibimbap beef while I was instantly lured towards the Chicken curry after smelling the aroma of curry from my neighbor's dinner plate. I love the salad with the Japanese sesame dressing. However, the main highlight and surprise was my curry, I didn't expect the rice to be that soft or the chicken to be that tender and flavorful. Hooray for Delta!

The only thing that I didn't liked was the Chocolate Cake. It was simply too sweet for my taste despite after scraping off the icing on top. 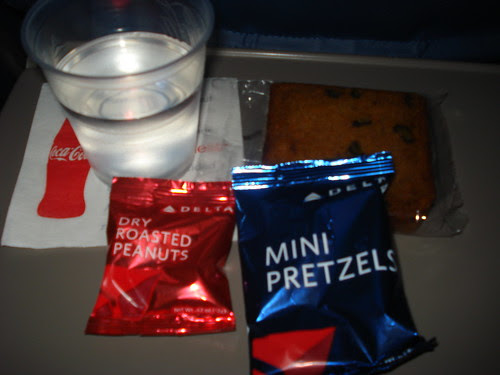 All throughout the evening, we had the choice of grabbing some snacks from the pantry. Paul and I helped ourselves to packs of nuts, pretzels and Carrot Cake. I love drinking their Evian water too.

We forced ourselves to sleep to avoid experiencing jet lag in the coming days. We were awaken by the gentle tap of the friendly Chinese flight attendant asking for our choice of drinks for breakfast. What?! Eating time again? 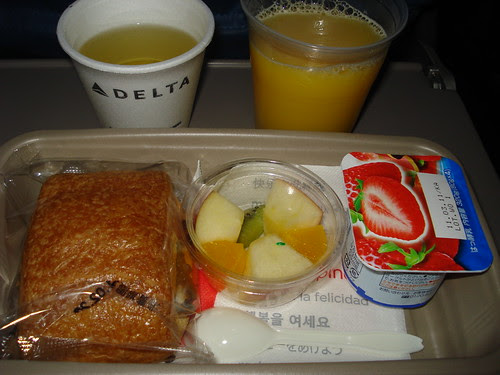 You bet! Before landing, we had a simple breakfast platter of Strawberry Yogurt, Chocolate Croissant and Fresh Fruits. Our second flight lasted for 9 hours and I really felt like I've been eating all 9 hours.

Delta Airlines also has one of the most reasonably priced tickets to the US from Manila, with the great service and quality of food that we had during our flight, we agreed that it was definitely worth it.

The Bad
Well, there's only one thing that we hope would be improved in most Delta aircrafts, the very tiny legroom and seats in the Economy cabin. I've tried a million possible positions in order to catch some sleep but it's pretty impossible getting comfortable without banging your knee against the food tray or your neighbor's seat. Despite not being vertically gifted (a.k.a. tall), I still had a hard time stretching my legs due to the tiny leg room. Thus, may this serve as a warning to all of my long-legged readers out there.

Over-all, my flight was pleasant. Contrary to hearsays and negative reviews, we were pretty glad to have chosen Delta Airlines.