In The Music Scene : NKOTBSB in Manila!!! 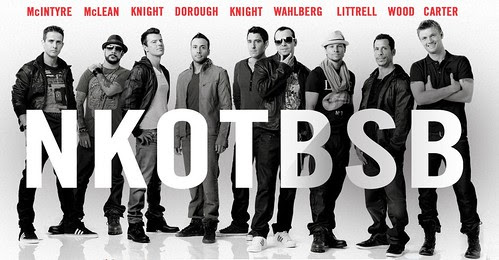 Two years ago, I heard about the news of this amazing musical collaboration called NKOTBSB (New Kids on the Block / Backstreet Boys). Two of the greatest boy bands of all time together in one concert. I mentioned in my previous entry that yes, this is definitely one contest that I will never miss. I love the Backstreet Boys and yes I am a HUGE fan! ♥

I squealed like a little girl when I saw their huge billboard announcing their upcoming concert  in California last year. Oh how I prayed to the high heavens that they'll come to Asia..more specifically, the Philippines SOON....

Sadly, I might have to miss this :( My boy band concert buddy Pan is flying out for another business trip on that day and I highly doubt Paul would be game enough to endure at least two hours of fan girls screaming all around him. Even my best buddy T will be out of the country on this day and fellow BSB fan Didi is expecting her 2nd baby, I doubt she's allowed to go to concerts where pushing, shoving, dancing and jumping is involved!

Checking the rates, I gasp as I saw the prices. It's quite steep. Way too much for what I was expecting the ticket to cost. Well, on second thought, to see Nick, AJ, Brian and Howie again.. I might just re-consider...

Well, for now I might just have to pass. Till next time Backstreet Boys! Even if I cried when I first saw you on stage...even if Nick, you're still such a cutie with your two hands on your armpits in that photo above (hehe). There will definitely be a next time!