August 13, 2012
It was our first day in Seoul, Korea and quite similar to most of our past trips, it was drizzling the entire day. I really do not know if we're (The Food Club) just bad with timing or one of us have a big balat (birthmark) that attracts rain wherever we go. I wonder who it is... *ahem ahem* Anyway, in some parts of the world, they consider rain as good luck so let's just think that we will all be blessed with lots and lots of good food! *burp* 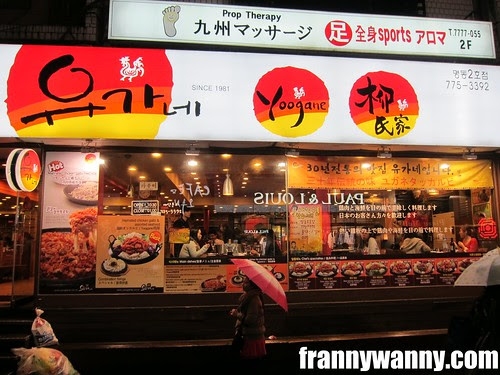 After taking our much needed rest at the hotel to make up for the lack of sleep due to our red eye budget flight, we walked around Myeongdong to check the place out. Some did a little window shopping, some actually did shopped already while some of us went to search for our dinner place! We didn't have to walk far as we quickly spotted the bright signage of Yoogane that's just a few blocks away from our hotel. Creating the group's itinerary, I did a thorough research and remember putting Yoogane down on my list of restaurants to watch out for as its said to specialize in really good Chicken Galbi (Dak Galbi). Hooray! One done, many many to go!

Looking at the menu, I was relieved to find out that it was in English. We have been warned that some Koreans have poor command in English and it would be really hard to choose what we want to eat if we will have to rely on the photos on the menu. Since we were a big group, we had to occupy three tables. On my table sat fellow food bloggers Richard (and his family), Jane, Paul and our friend Grace. 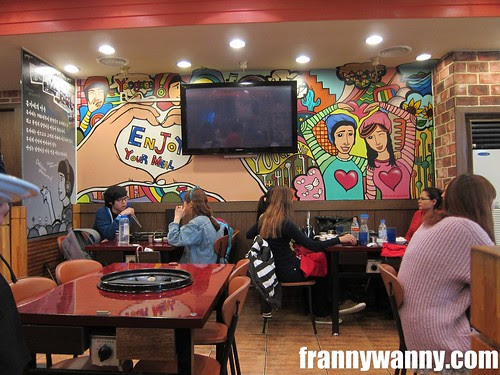 I love the fun and casual vibe of Yoogane. Totally loving the wall art of the lovey-dovey boy and girl making the ♥ pose. Paul and I should do that someday! 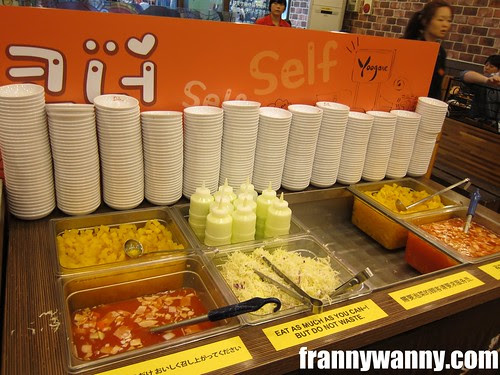 They also have a self-service station for utensils and unlimited cabbage salad. I love that diners can manage to keep this so tidy and the stocks abundant. Talks a lot about their discipline and honesty.

We agreed to share our orders as the photo made it seems like the serving is quite big. We were a bit dumbfounded though when the server consistently insisted that we can't just get one of each and wanted us to get three orders per kind. It was only later on that we realized that the price on the menu is good for one and for our group of 6 we had to order a minimum of 3 each. 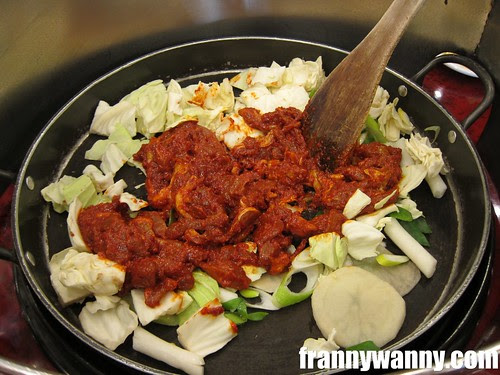 Our first choice was the house specialty -- Yoogane's Marinated Chicken Galbi (W8,000/order). I have high expectations towards any dish that bears the name of the restaurant. It's my indicator that the owner must be really proud of it thus it's truly a must-try. We got three orders of this to be shared by the six of us. Our pan was filled with raw chicken marinated with Korean spices, cabbage, onions and more spicy sauce. I really have low tolerance for spicy food but I ended up eating a lot of this Chicken Galbi. It was really good, so tender and tasty! Lauren was teasing me that my face was bright red brought about by the spiciness of the food but I didn't mind. I had about three bowls of this! 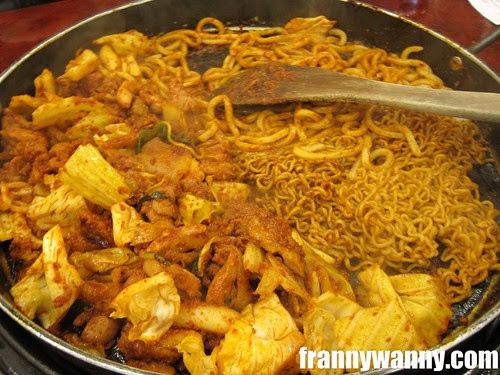 We also got additional Ramen and Udon noodles to go with our Chicken Galbi. Yum yum yum! 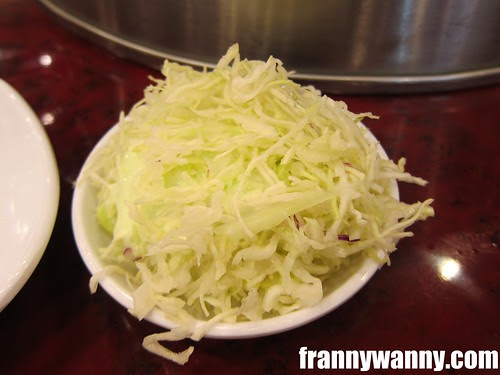 My tongue was on fire and to tame it down a bit, I had a lot of the complimentary cabbage salad with their homemade creamy sauce. It was refreshing and light! 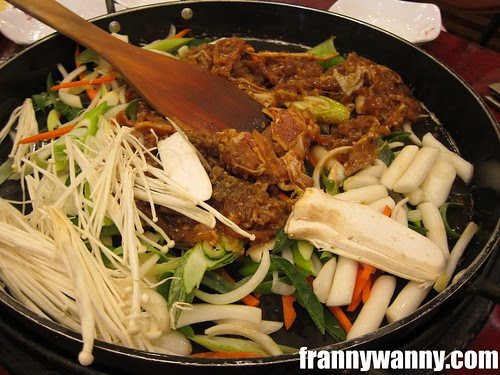 For the non-spicy eaters, we tried the Char-grilled Chicken Galbi (W9,500/order). Once again, we had three orders of this and I love the sweet-salty flavor of the chicken galbi. This would go really well with a cup of rice but since we had our fill of carbs with the noodles from the first dish, we decided to just have this as is. I love that this dish came with a good amound of enoki mushrooms, ddukbokki (rice cakes) and more veggies. This was pretty good but Paul and I still had our hearts on the Yoogane Marinated Chicken Galbi. Still daydreaming about it as I type this. :)

Well call it luck (see, I told you rain brings good luck!) that I found out that Yoogane just opened its first branch here in Manila! In fact, they opened TODAY! Expect that I will be heading there pretty soon! Can't wait to be reunited with my yummy Chicken Galbi!

For those heading to Seoul, Korea -- make sure to dine at Yoogane in Myeongdong! It's quite hard to point the exact address but it's right across Saboten and is near Uniqlo (close to the Myeongdong Subway Station). Better to print this entry out and point the photo above to any local who might be able to help you find the way. :)