February 04, 2013
There's a new kid in town and she's a hidden gem ready to be discovered. 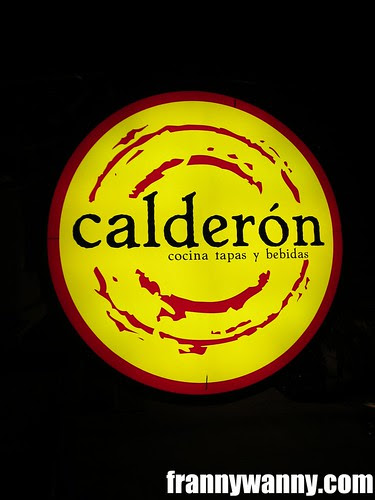 Say hello to Calderon. A new Spanish restaurant located right at the heart of San Juan City. This is a town that has been dubbed as the modern Chinatown. With more than a dozen Chinese restaurants and delis scattered all over this tiny city, it was quite a surprise to see a restaurant serving tapas instead of dimsum perhaps hoping to add some colorful Spanish flair to this very Oriental community. Quite a bold step, if you ask me but hey, change is always GOOD.

Take it from me, a girl who is about to embark on a new journey, I began the year with a resolution to be more brave in trying new things. Though I'm not a stranger to Spanish food, there I was together with Paul and a couple of dear friends ready to try what Calderon had to offer.

Allow me to share with you the different dishes that we were able to try during the two consecutive visits that Paul and I had in less than a week. To say we loved it was definitely an understatement. If only I have more time, I'd go back to Calderon again and again. Okay, I'm getting ahead of myself again. Let me just tell you why Calderon has successful won our hearts: 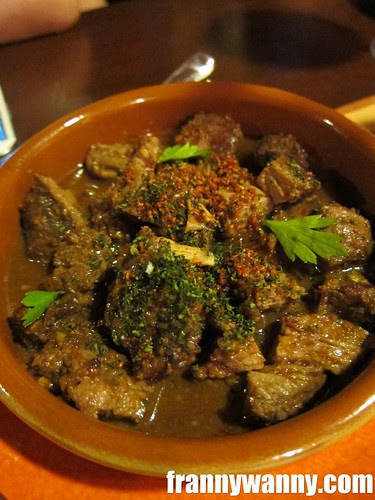 Salpicao (Php. 360)
We had this on our 2nd visit and ordered this with not much expectations. However, as soon as we tried the first piece, we couldn't stop getting more and more. We loved it so much that we even asked for another order as a single serving  was obviously not enough for 6. Not that the serving was small but rather, each one of us just wanted more. 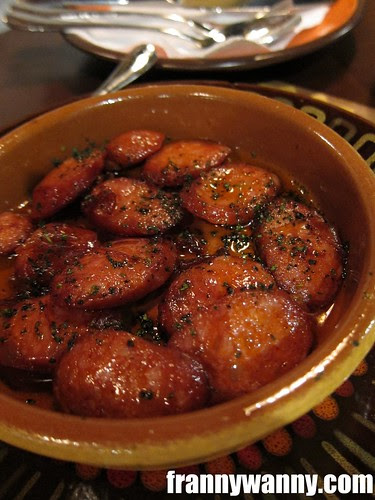 Chorizo Fritos (Php. 280)
One look at Calderon's menu and you'll surely notice that 40% of its tapas has something to do with chorizo. Well we took it as a sign that its something they're pretty proud of and tried the simplest form, the Chorizo Fritos. Thinly sliced chorizo that were pan-fried with garlic and olive oil. This was also pretty good and we had it during both visits. A guilty confession? Paul and I would keep the garlic oil and drizzle a small amount on our paella to make it even more flavorful. 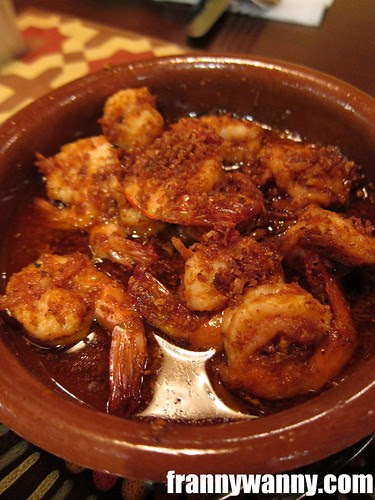 Gambas al Ajillo (Php. 280)
I love Gambas but this is the only tapas that I didn't like. Tried it twice and my feelings towards it remain the same. The shrimp was just too mushy which we suspect was probably because it was cooked frozen and not given time to thaw. Skipping this next time. 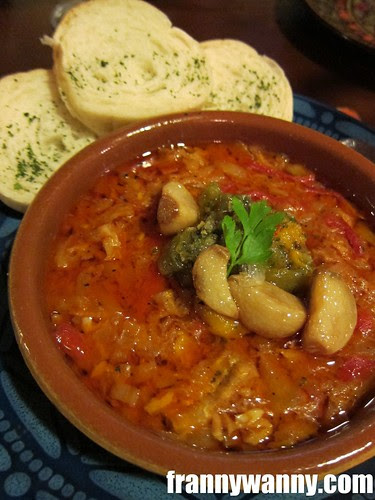 Bacalao ala Vizcaina (Php. 280)
Ele wanted a seafood dish and so we tried the Bacalao. I've tried bacalao a number of times in other Spanish restaurants and had wonderful memories of it. Calderon's version was served at the same time with the tapas which surprised us a bit as we thought it was considered part of the main course. The size was a bit too small for sharing and instead of being able to have the bigger slice of Bacalao, it was served in flakes. The flavor was there but I could hardly appreciate the fish as it was just too tiny to savor. As a consolation, we enjoyed using the sliced bread to mop up the rich tomato bacalao sauce. 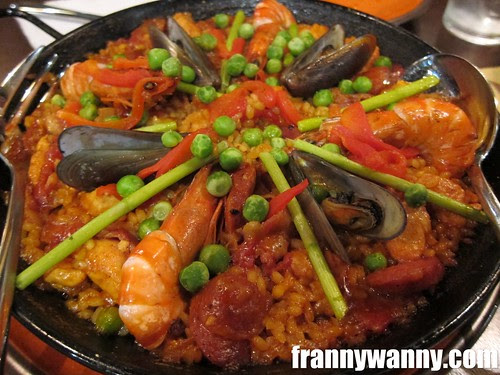 Paella Valenciana (Php. 700)
I love paella. It's funny as I could live without having plain rice but my weakness lies on a plate of fried rice, risotto or a llanera of paella. Put that in front of me during my diet season and trust me, that will definitely be the mark of my downfall. Believe me, when I say that Calderon's Paella Valenciana is definitely a must-order. It has everything one loves in a perfect pan of paella -- soft yet not watery flavored rice, topped with all the yummiest accompaniments such as chorizo, shrimps and mussels and there's that much-awaited layer of soccarat at the bottom that everyone loves scraping for. It's really good and I highly recommend that you try it too. 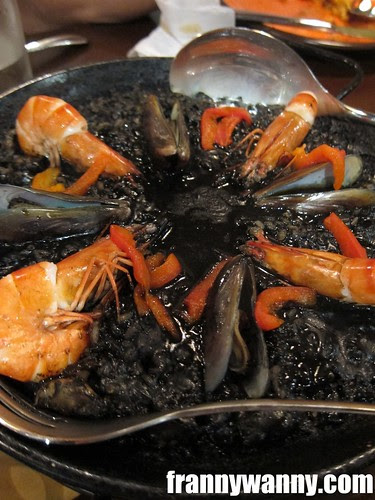 Paella Negra (Php. 400)
As much as we instantly loved the Valenciana, it was a different story for the Negra. On our first visit, the Paella Negra came out burnt. Too burnt that as we tried to scoop some rice, we instantly got a whiff of the burnt smell. I love Paella Negra very much but that night, I just had a spoonful and went for the Valenciana for the rest of the meal. On our second visit, I was hesitant to try this but since our companions still wanted more paella, we went for the Negra and there we were crossing our fingers and toes that it'll be better this time. Well, I guess we got lucky, as this time, the Negra came out better. Way better in my opinion. I love adding a spoonful of aioli sauce on top of my Paella Negra but somehow I forgot to do this as I was pleased with the rice alone. I'm glad we gave it another chance. 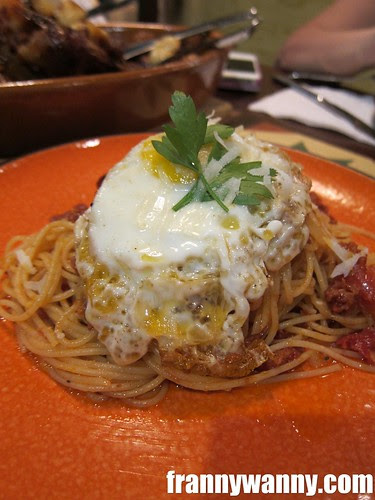 Pasta de Chorizo (Php. 220)
I never order pasta in a Spanish restaurant but for some reason, we tried it on our fist visit. I loved it! I love the thin angel hair pasta topped with Calderon's winning chorizo and a piece of fried egg. I kept on thinking about this dish days after our first visit that I ordered it again the second time around and was happy and satisfied once again. 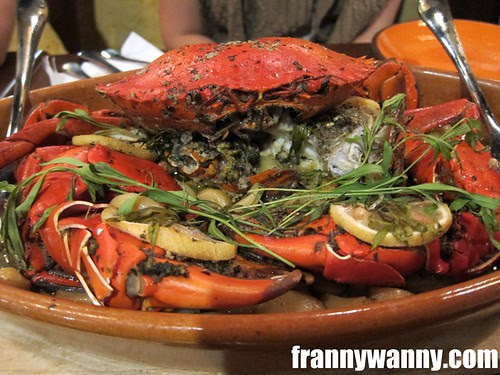 Cangrejos ala Calderon (Php. 1,000)
Here's another first -- having crabs in a Spanish restaurant. I love crabs but I'm extremely lazy to use my hands when eating in public. Luckily these babies were cracked open well enough that I easily was able to pull the meat out from the claw. We all loved this one most especially for the sauce. It was delicious! I can't get over how garlicky good this one was. 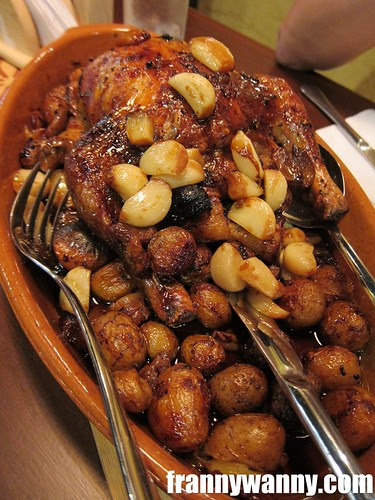 Pollo Iberico (Php. 800) -- order 1 day ahead
Calderon's Iberian Chicken is also one thing you have to try. We had this together with the Cangrejos and yet we couldn't decide which one was better than the other. Both were equally good and were extremely garlicky which made it soo fragrant and flavorful. This is perfect for special occasions or even during Sunday family dinners too. 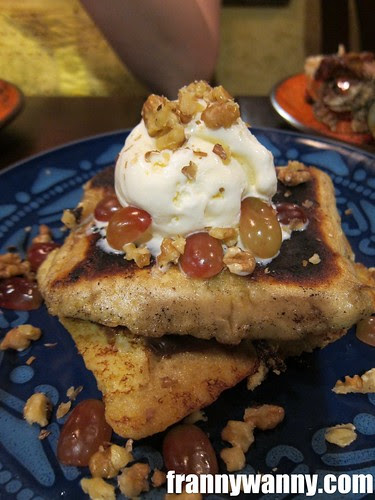 Torrijas con Helado (Php.250)
Calderon offers a couple of dessert items but we weren't really blown away by it. Hope they'll start serving Canonigo slices or perhaps some Mango Jubilee? Nonetheless, for those looking for a good way to end this delicious meal, you can just hop over to one of Calderon's neighboring restaurants for a cold cup of milk tea or for some crepes and hot chocolate instead.

Calderon is one of my newest favorite go to places in the neighborhood. I can't wait to be able to visit again for more of their yummy Salpicao, Paella and Chorizo. The place is small so I highly recommend that you call to reserve a table beforehand. Parking spaces are limited too so place go early.