Since I'm finally back at the work force after a month-long break, here I am again excited at the thought that the weekend is just a day away! I woke up with a smile today knowing that it's the last day of the work week. Even my walk to the bus stop was faster this morning as I suddenly have this surge of excitement and anticipation for what we can do for the next two days.

Anyway, Paul and I agreed to meet up for dinner at Vivo City a few hours ago. For those who haven't been to Singapore, Vivo City is actually your gateway to the beautiful island of Sentosa. Here, you can take the tram that will take you to the island within minutes. We've been to this mall during our trip to Singapore 3 years ago but weren't able to go around as we just came here to head to Universal Studios for the day. Looks like this will be the mall that I'll end up knowing by heart if I frequent this place more often. 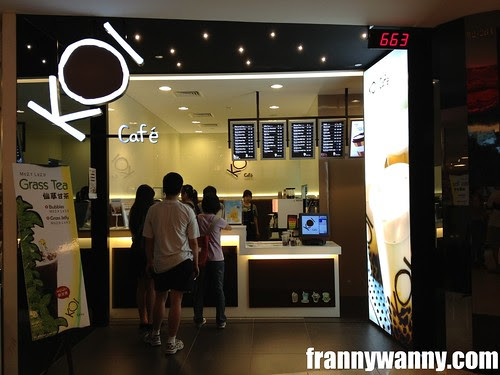 After dinner, we thought of walking around before heading home. It was then that I chanced upon a milk tea shop called KOI Cafe. I remember my friend Sophie telling me about this and since I miss home already, I thought maybe it'd be a good idea to drink that one thing that I love back in Manila which would be a cup of milk tea!


We got in line and with everything in Singapore, service was very efficient. I chose the plain milk tea ($2.40) with free pearls. There were other flavors like the Ovaltine ($2.90) which I was thinking of getting first but I ended up sticking with the regular kind to test how yummy their milk tea really was. 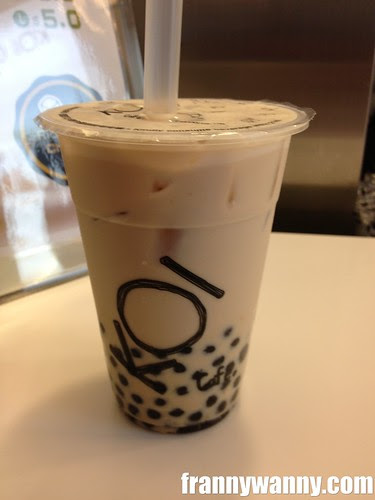 We were given a small receipt with our assigned number and it took them less than 10 minutes to have my drink ready and all I did was to proceed to the pick-up counter and to show them my number receipt. The milk tea was very mild and this was something I was happy about. Given that I had this after dinner, I was initially worried that this drink my keep me up all night. However, the tea flavor was very mild and that the milk was also light enough that I didn't feel any uncomfortable feeling in my tummy after consuming their medium-sized cup. The pearls though we a bit too small and too chewy that I got tired of biting into it after sometime. For me, Chatime Philippines still has the best pearls in this part of the world.

The menu was simple as they have divided their drinks into 5 main categories: milk tea, coffee, fruity, brewed tea and bubble. Over-all KOI Cafe was pretty good. Looks like it'll be where I'll be heading too whenever another craving for milk tea come around.

KOI Cafe has a total of 16 branches around Singapore as well as in Taiwan, where it originated, Macau and Xiamen. I hope someday KOI Cafe will also make its way to the Philippines. I wonder how it'll do versus the milk tea giants back home.
assam bubba tea bubble tea drink koi koi cafe milk tea tea