August 08, 2013
When Paul and I went to Macau a year ago, we really do not have any set itinerary then. It was an overnight stay and we're just open to going wherever the wind (or in our case, the shuttle bus) took us. There was just one thing though, we wanted to try authentic Portuguese Egg Tarts as we're both crazy about it. In Manila, we'd frequent Lord Stow's Bakery and figured that if it was already yummy in Manila, what more if we go to its "homeland"? 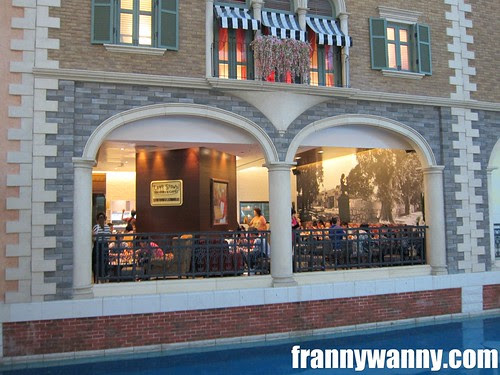 So on our first day, we saw Lord Stow's Bakery at The Venetian and despite having had our lunch an hour ago, we parked ourselves in a small corner table and had a piece of Egg Tart each. The line was quite long and so it took me about 10 minutes before I finally got our order. I carefully brought the warm bag of egg tarts to our table where Paul was excitedly waiting for me the egg tarts (*sigh* who am I kidding?). 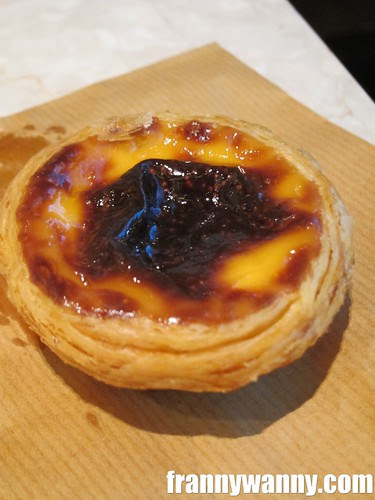 Look how the top glistens in this photo? I'm happy to say that Lord Stow's egg tart stayed consistent with the ones that we'd buy in Manila. The pastry crust was flaky but it still had a good hold, the filling very creamy and the top coating was just divine. It may be a bit oily due to the butter (lots of it, I guess) used in making this.

The next day, I was going through Foursquare to check out what are the food establishments around the hotel and the first one on the list was -- Margaret's Cafe e Nata. That got me so excited that Paul and I agreed to drop by before heading to the airport. 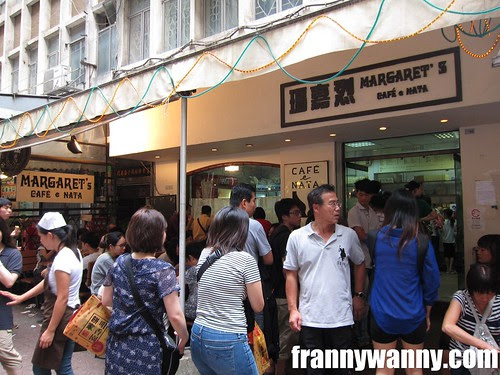 Just when I thought the line at Lord Stow's was long, I definitely wasn't ready for this one. From the street, you'll have to keep your eyes open for this lone signage that points you to turn left to head to the coffee shop. As you go straight, just follow the sound and if you're lucky, the smell, that will lead you to the entrance of Margaret's Cafe e Nata.

Before I talk about the egg tart, allow me to let you in on this juicy rumor. It's said that Margaret (the owner) is actually the former wife of Lord Stow's. They used to operate Lord Stow's Bakery together but after parting ways, Margaret opened her own cafe. Now, when you ask any local on where to get the best egg tarts, expect to get varied answers as each has his/her own favorite.

I was able to try both and for me, I liked Margaret's egg tarts more because I felt that Lord Stow's had a very commercial taste to it. This is in contrast to Margaret's that tasted more homemade giving me that warm, comfy feeling in every bite. However, Paul found Margaret's Egg Tarts more oily thus he prefers Lord Stow's more. To each his own, I'd always say. :)

A trip to Macau is not complete without having some egg tarts, I highly recommend that you try them both and decide which one you like best.

Margaret's Cafe e Nata is located at 17a Rua Alm Costa Cabral, Avenida de Almeida Ribeiro. It's just a block away from Hotel Sintra and is located in an alley fronting the Grand Lisboa Hotel.

Lord Stow's Bakery is located at Level 3, Grand Canal Shoppes, Venetian Hotel. They also have other branches around Macau which you can find here.
egg tart food lord stow's macau margaret cafe e nata portuguese egg tart what to eat in macau where to eat in macau