- March 21, 2015
It's no big secret how much I love ice cream. Served on a cone, cup or on top of a freshly baked waffle, ice cream has been my favorite meal-ender since I was a kid. I'm also glad that my office somehow has a steady supply of Magnum Ice Cream, thanks to all those who got confirmed and/or promoted, making it so convenient for me to just grab a pack when I need to de-stress or to end my lunch on a happier note. It may not be the healthiest dessert on the planet but hey, it makes me happy so I'm sticking by it. :) 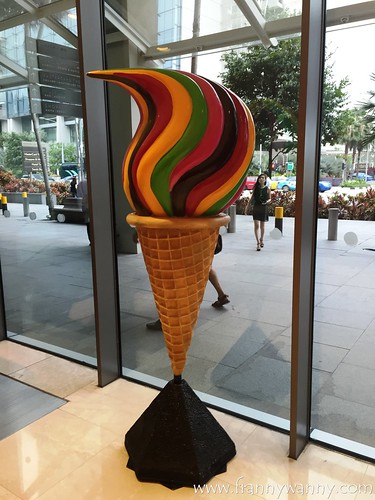 Gelato is the Italian's take on ice cream. What makes it different from it's American counterpart is the use of less cream and more milk. Thus, if you think about it, gelato has less fat content vs. any ordinary US-made ice cream. There's a whole lot of science that goes into making a gelato which Paul was trying to explain to me all evening. Things like the speed of churning the gelato, the sugar content, the freshness of the ingredients and so on. After all that gelato talk, it was my turn to convince him that we go to Italy -- the land of gelatos! 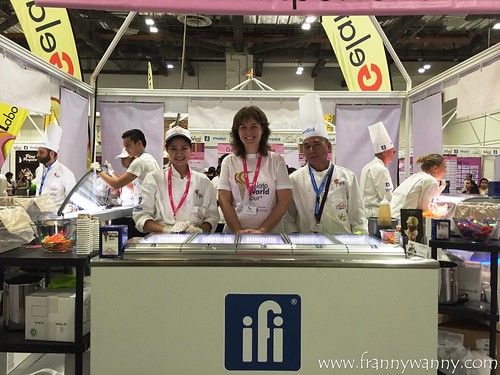 While we would need some time to plan that gelato food trip to Italy, we're both so lucky to learn that there was a Gelato World Tour featuring the top 16 gelato brands all over Southeast Asia happening this weekend at the Marina Bay Sands Convention Centre. Entrance is free and if you want to take part in the gelato sampling, you just have to purchase a S$12 ticket that will entitle you to try 8 out of the 16 gelato flavors available. Not a bad deal at all! 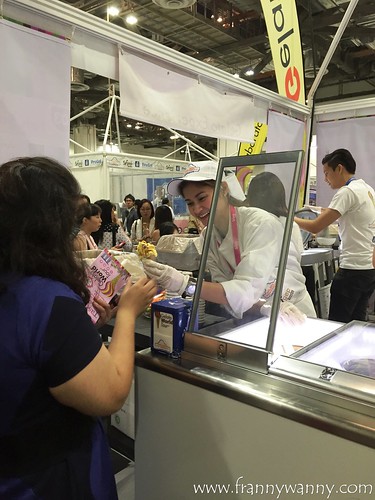 We were so happy to see Bono Artisanal Gelato from the Philippines there! Yes, the brand that started the Speculoos Gelato craze in Manila two years ago is here in Singapore with their entry to the Gelato World Tour -- Mango Ube Symphony. This is a very bold step, if you ask me, as not a lot of people are familiar with ube (purple yam) yet a smart choice as it perfectly embodies what the Philippines is known for. I was also so happy to finally meet the pretty lady behind Bono Gelato's delicious creations -- Chef Zarah Zaragoza-Manikan.

Here are some of the gelato flavors that Paul and I sampled yesterday: 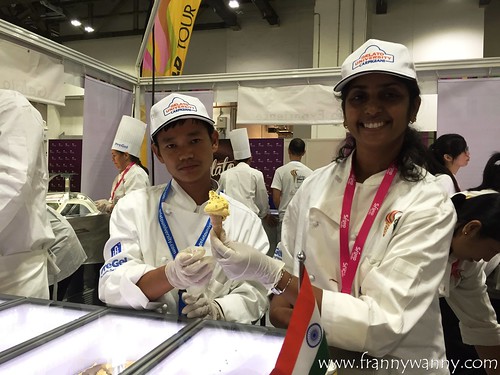 Caramel and Almond Crunch from Boomerang Ice Cream (India)
Fresh milk, fresh cream, sugar, caramel, stracciatella, roasted Marcona almonds, Belgian dark chocolate, rose white extract
This works for caramel-lovers like me! Milky and caramelly, this is what sweet dreams are made of (well in my imagination, that is). 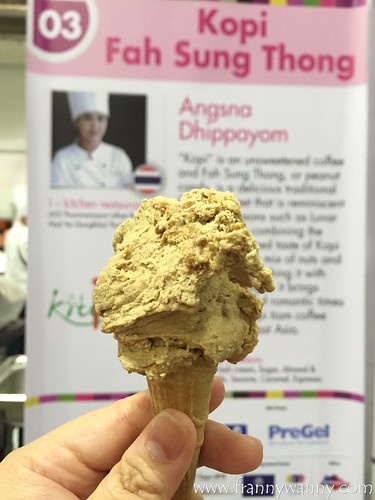 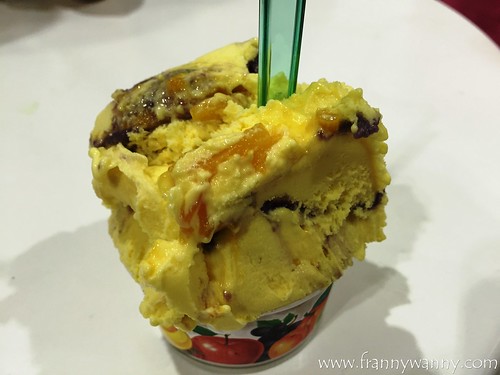 Mango Ube Syphony from Bono Artisanal Gelato (Philippines)
Fresh milk, Guimaras mangoes, Rhum-soaked dried mangoes and purple yam (ube)
This was definitely a winner! I love the perfect combination of sweet Philippine mangoes with the creamy purple yam. Sweetness level was just right and it's the kind that will make you want more. 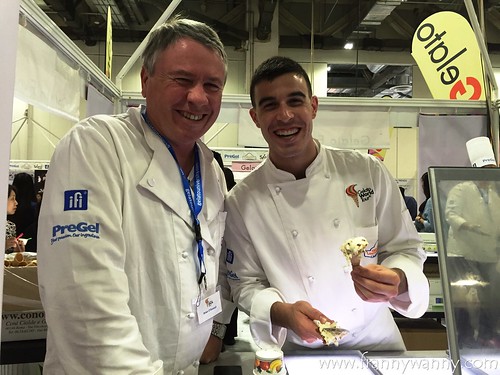 Roasted Walnut and Honey Crunch from 48 Flavours (Australia)
Fresh milk, fresh cream, sugar, pralines, walnuts and honey
Very clean and mild flavor of sweet honey and that nuttiness in every bite (or rather lick). 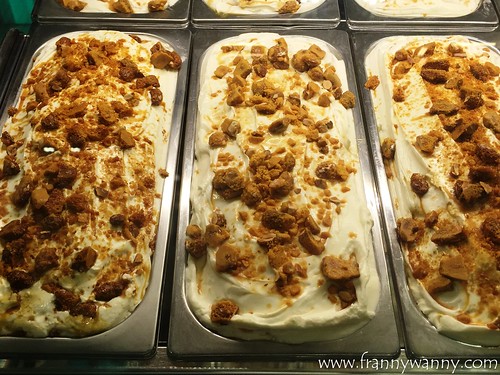 Burnt Butter with Toffee Almond Brittle from Yamba Icecreamery (Australia)
Fresh milk, fresh cream, sugar, danish-style salted butter, almonds, cocoa butter and maldon salt
This is the kind of gelato that you'd love to have when relaxing after a stressful day, while nursing a broken heart or while watching TV all night. It's that perfect comfort food that will sure put you in a happiness disposition. The play of sweetness and salty flavor hit all the right notes and the almond gave it a good nutty texture in every bite. I loved it so much that I went back to give the chef a thumbs-up sign. 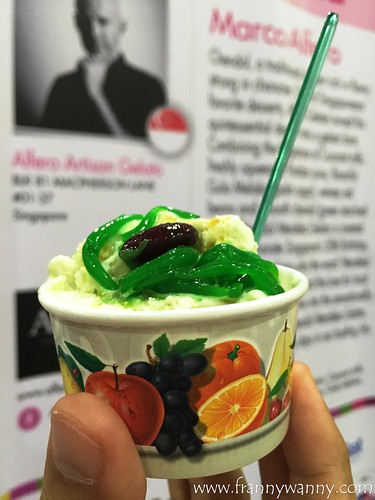 Chendol Merdeka from Alfero Artisan Gelato (Singapore)
Fresh milk, fresh cream, sugar, coconut milk, freshly squeezed pandan juice, gula melaka, red beans and chendol
This one got Paul's seal of approval. While it was a bit too milky for my taste, he loved how the gelato has captured the authentic flavor of his favorite Singaporean dessert -- Chendol. After all, that's the main point right? Name the gelato after the flavor it should taste like and this one was pretty spot on. 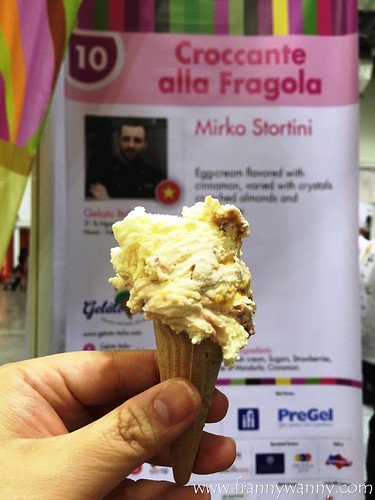 Croccante alla Fragola from Felato Italia (Vietnam)
Fresh milk, fresh cream, sugar, strawberries, Croccante di Mandorla, cinnamon
Very interesting flavor that reminded me of a custard flan. It has a nice comforting taste that I told Paul, it would be perfect for Christmas. Think cinnamon, eggnogs and all those warm creamy spice popular during this season. 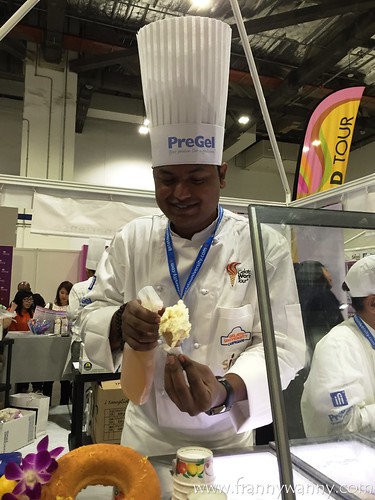 Beer with Ciambella from Pink Me Up Cafe (Singapore)
Fresh milk, fresh cream, sugar, homemade yogurt, beer
The last gelato that we tried and the only one with alcohol content among all that we tried. One lick will surely give you that familiar beer taste. Not really a fan but my hubby surely enjoyed every bit of it. 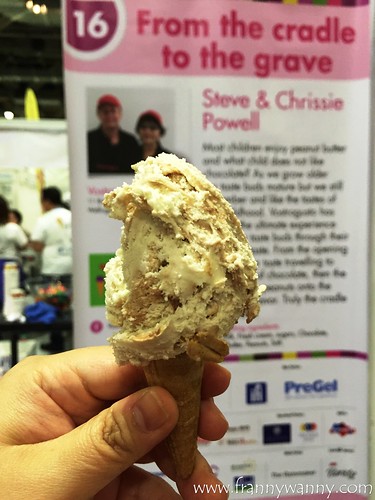 From Cradle to the Grave from Vostrogusto Gelato (New Zealand)
Fresh milk, fresh cream, sugar, chocolate, peanut butter, peanuts and salt
At first, I thought the name of this gelato was a bit morbid but after chatting with Chefs Steve & Chrissie Powell, I learned the it's made of peanut butter, the kind that one loves from childhood up until adulthood. It actually is like taking a big bite of everyone's favorite -- Reese's Peanut Butter Cups and making it more creamy with a bit more salty kick. Sadly, we both felt this was way too salty for our liking that I had to stop midway.

There you have it! Luckily, we got an extra stub so we were able to try 9 different gelato flavors. My top 3 picks include the gelato creations of Bono Artisanal Gelato, Yamba Icecreamery and I-Kitchen. I've sent in my vote and I hope that any of our top picks make it this round as the top 3 winners will be competing in Italy this coming September.