Brunch at Mr and Mrs. Maxwell at Ann Siang Road

- April 22, 2016
For the past 3 years here in Singapore, Paul and I found ourselves a "family" who has been our biggest support unit when we were adjusting to our new lives here. You may have noticed that I would mentioned them once in a while under the initials -- C, I and O. From day 1 they warmly welcomed us to our shared flat and they would generously offer tips and advices on just about anything and everything about the Lion City. From sharing their go-to places for brunch to helping us determine which credit card to go for and how to use it wisely. We quickly hit it off so well that 3 years pretty much flew by so fast. 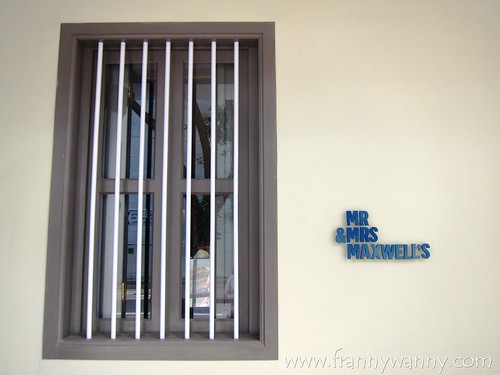 As with anything in life, change in inevitable. Life has to continuously progress and for Paul and I, we felt that it was time to say good bye to our comfort zone and to take another step up. We decided to move out. As much as we love being in the company of C, I and O, we knew that it was high time for us to seriously gain more independence and to acquire more responsibility. So while we don't get to see them on a daily basis, we do hope that whatever bond we may have forged over the past years was strong enough to turn into a lifelong friendship. 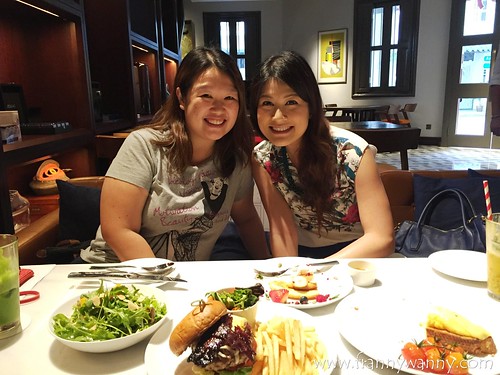 So, a week after our big move, I invited I to join me for lunch at Mr and Mrs Maxwell in Ann Siang Road. Like me, she's also a big foodie so I thought that among everyone that I know in Singapore, she would definitely enjoy this meal as much as I would. It was a nice windy Saturday where I met I inside the very cozy-looking restaurant. Mr and Mrs Maxwell is the cafe of The Club Hotel and they serve all-day breakfast dishes for their in-house and walk-in guests to enjoy. 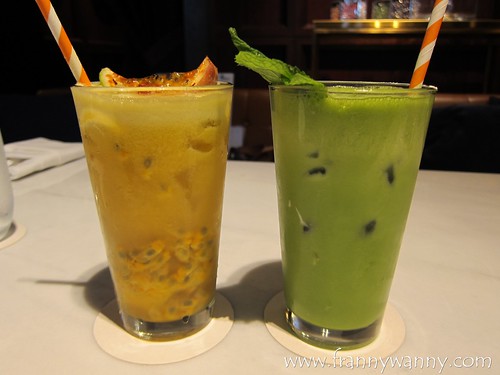 We started our meal with a glass of healthy smoothies first. Morning Glow (S$10) for her, Greek Goddess (S$9) for me. I'm currently in this green juice phase so it wasn't hard for me to choose which drink to go for. Thankfully, the Greek Goddess was delicious! A drink that's rich in Vitamin K, it's a mix of spinach, green apples, yogurt, mint and honey. It doesn't have that strong leafy flavor but rather, it has a nice tangy flavor from that yogurt that I love. 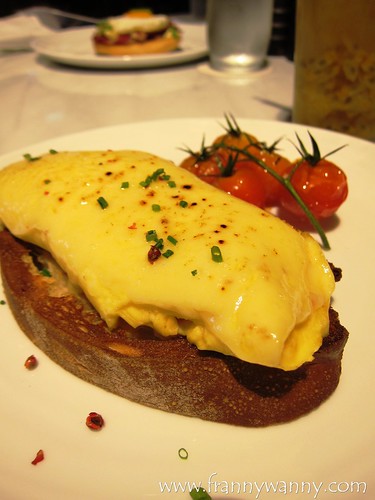 Following our healthy smoothies, we had the Lobster Omelette (S$16) which I have been seeing on my Instagram feed for weeks. I just love using Instagram now to do some pre-meal research as it gives me a good idea on what to order and what to avoid. 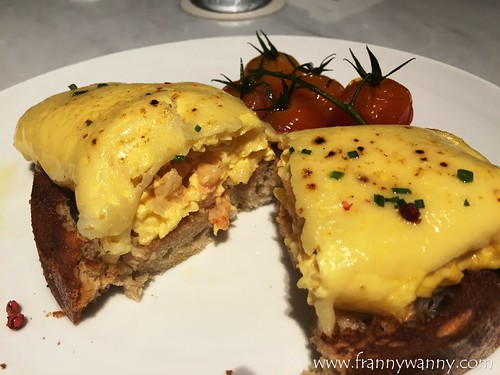 As for Mr and Mrs Maxwell, the Lobster Omelette was a popular choice and I guess it doesn't hurt that it's pretty photogenic too. It's a fluffy egg omelette filled with flaky lobster meat with some herbs and served on top of a piece of toasted sourdough bread, gruyere cheese and some cherry tomatoes. It was good but I was expecting the omelette to be bursting with lobster meat. Somehow, I felt that the quantity was a bit too small to be fully enjoyed. 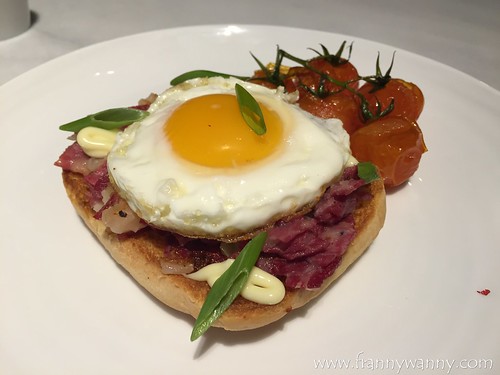 Moving on, we also tried the Corned Beef Hash (S$16) which was a very straight-forward, traditional breakfast choice. If you're the type who wants it simple yet delicious then go for this. I love the fact that they made use of the chunky corned beef as opposed to the mushy flaky kind and it's pan-fried with potato cubes giving it a nicer bite. Served on top of panini bread and with a perfectly cooked sunny-side-up egg, I really enjoyed this dish and would love to go back to have this for more breakfast or brunch sessions. 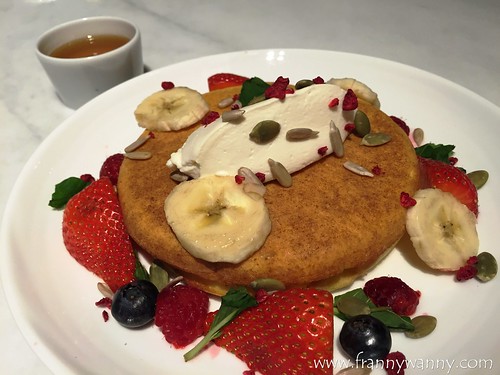 Following the delicious Corned Beef Hash, we had the Ricotta Hotcakes (S$14) which, I have to admit, I had very low to zero expectations on. You see, I've never had Ricotta Hotcakes despite how popular it is in Singapore. I've had ricotta cheese and hotcakes separately but when put together, I really didn't know what to expect. However, the creamy dense texture of the hotcakes combined with the amazing flavor of the truffle honey really blew me away on my very first bite. Unlike regular hotcakes/pancakes that has a light airy consistency, this one was slightly more dense but not really that heavy like a cheesecake. It was just right and serving it with truffle honey and vanilla yogurt just sealed the deal for me. 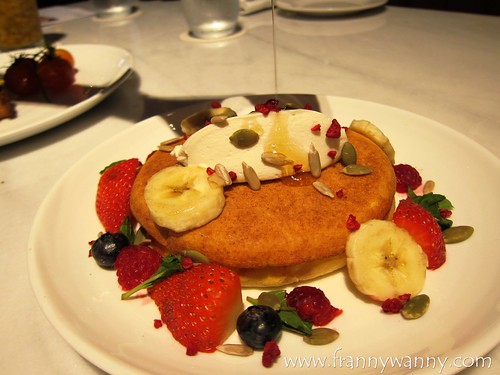 I'm crazy about anything with truffle oil but I never thought it would fare well with anything sweet. Well, this one just proved me wrong and I happily stand corrected while enjoying bites after bites of this delicious hotcakes. Clearly, this was my favorite dish that day.

After enjoying all our breakfast fares and smoothies, we went for the Champagne Punch (S$18) which is a sexy-looking champagne flute filled with sliced fruits and submerged in a glass of bubbly. Ahhh.. this is why I just love going out for weekend brunch. 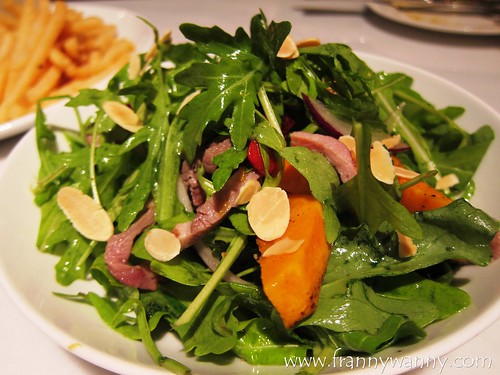 We're not done though, from the breakfast fare, we tried a huge plate of salad. According to the menu, Mrs. Maxwell's Slow-Cooked Lamb Salad was "created (for him) to enjoy his greens more." If you're wonder who are Mr and Mrs Maxwell, they are actually fictional character who somehow embodies every bit of us. They're avid traveler and big foodies too so these dishes were created as inspired by their trips overseas. I actually had fun reading bits and pieces of "their story" as captioned under each dish. So, this particular salad comes with strips of 28-hour slow-cooked Moroccan lamb shoulder that's tossed with rocket leaves and drizzled with lemon-spiced dressing. 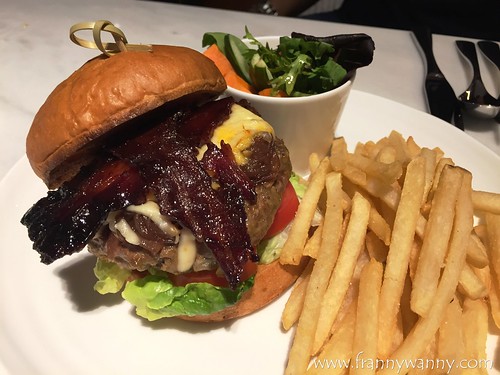 We also tried the The Club Burger (S$24) which I felt the boys would love. It's a tall-sized burger which makes use of Angus beef patty and topped with cheddar and emental cheeses plus strips of candied bacon. It was good but what really stood out were those freshly cooked french fries (chips) which were amazingly good. Apparently, Mr and Mrs Maxwell is known for their yummy fries that some guests would really order one whole order of it.

Dessert was up next and what we both weren't expecting was for our last course to be quite action packed. 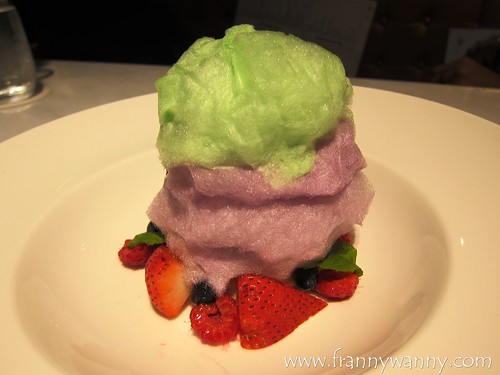 Starting with the Baked Alaska (S$16), it came to our table looking like a cloud of cotton candy. Colored in pastel, it was just so pretty that I wish a unicorn would just show up. It was my first time to have Baked Alaska looking like this but I realized that I have judged too soon without even waiting for the highlight of our meal to happen.

Then our server came with a lighter and professionally flambe'd our platter of purple and green cotton candy. Check the video out below!


Wasn't that a-m-a-z-i-n-g? It was just 6 seconds of awesomeness and if given a chance, I would love to watch the whole action once again. The Baked Alaska was yummy! I love how the sugar coating somehow hardened and caramelized making it such a nice contrast to the creamy core inside.

Since we just love the culinary action, we were led towards the bar area to watch another live action this time with their signature Crepe Suzette (S$16). 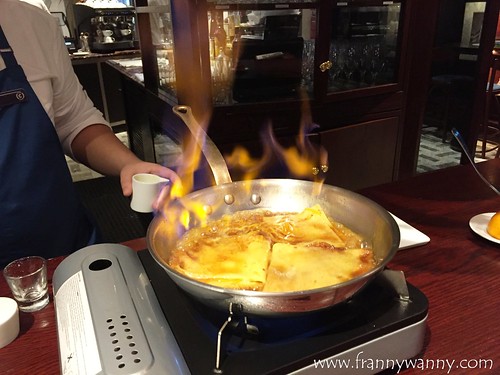 This time, it wasn't as easy as simply lighting up the entire dish but it includes pouring a generous amount of alcohol like a sauce and firing it up to make it yummy and well-caramelized. The kitchen action was quite intense that the fire alarm system actually went off halfway through the flambe-ing. It was funny but since the restaurant was adjacent to the hotel, I pity the guest who may have been showering then and who might have panicked upon hearing the alarm. Yipes! 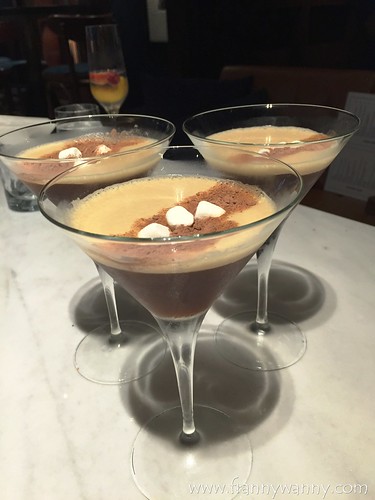 To go with our dessert, we had the Truffle Martini (S$18) which my friend I felt was pretty good. Sadly though, I wasn't a fan of chocolate and bitter alcohol combined so I just took a small sip and carefully pushed my glass to the side.

It was such a nice brunch at Mr and Mrs. Maxwell and more so, I was able to catch up with I too. I will surely be back to have more of those amazing Ricotta Hotcakes.