- September 28, 2016
To borrow Andy William's famous line, "It's the most wonderful time of the yearrrrr!"

While he's definitely pertaining to Christmas which, which by the way, is 87 days away (yahooo!!), I'm talking about The Great Meat Feast at The Carvery in Park Hotel Alexandra. I still remember when the hotel opened a little more than a year ago, I've been getting positive feedback and raves from fellow food bloggers about their amazing buffet line-up which is said to have one of the best steaks in town. That's really a bold statement given that there are a lot of steak restaurants here in Singapore and some are even owned by Celebrity Chefs and Michelin-star Chefs too. With testimonies like that, I was certain that The Carvery was definitely worth checking out. 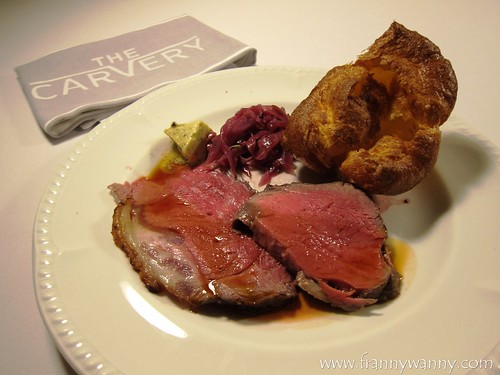 So, when I got an invite to be part of an exclusive sneak peek session of The Great Meat Feast at The Carvery, I made sure that I won't miss it no matter what! Our tasting took place more than a month ago so can you imagine how long we've all been waiting for this day to finally come? The secret is finally out and it's time to feast to our heart's desire. From 28 September up until 22 October 2016, have your fill of the best and finest cuts of beef which were specially flown in for this promotion.

There's the Aomori Rice Beef from Japan as well as the Cape Grim from Tasmania which were the first two cuts that I had that evening. I love how the Aomori was so tender. Well, Japan is known for its tender, melt-in-your-mouth, I-die-a-happy-girl types of steak from the wagyu to the kobe to this special piece called the Aomori. What makes it so tender is that the meat comes from a 20 month old cattle that was rice plant and spring water fed. How classy! It just has the perfect marbling in the right places making it one of the most tender cuts of steak I've ever had in my life. No kidding. Given that this steak is really special, it will only be available every Fridays and Saturdays only. 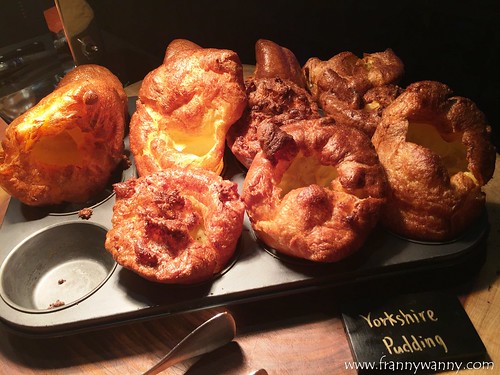 The Cape Grim hails from Tasmania and it's that perfect type of steak if you like your meat lean and with almost zero fat. I was told that this cattle was bred in a place where it has the cleanest air in the world. Can you imagine that? Given that, the meat is said to be high in antioxidants and beta carotene, which as we all know, can help fight cancer and is good for your eyesight respectively. To go with both the Aomori Rice Beef and the Cape Grim, I had the Yorkshire Pudding which I have to admit was rather on the dry side. I've definitely had better ones in the past. No amount of gravy could save it which was pretty sad as I was looking forward to this for a long time. Anyway, I won't let any dry siding rain on my steak parade. 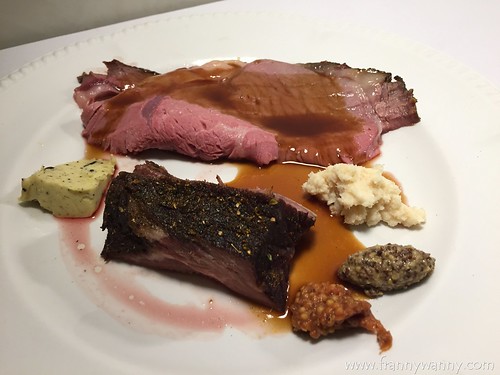 Moving on, we had the Mayura Full Blood Wagyu from Australia and the Zebu from Brazil. The Mayura Wagyu has a nice nutty flavor as, get this, the cows were fed with..CHOCOLATES. Looks like these are definitely fun chocoholic cows with full-flavored, robust meats making it pair so well with the more subtle sidings such as the creamy mashed potato and some mustard. If you ask me though, each steak cuts were marinated and seasoned so perfectly that there's really no need to accentuate its flavors with sauces but if you really want to then go for the Truffle Butter as well as the Red Wine Sauce which were both soooo good! 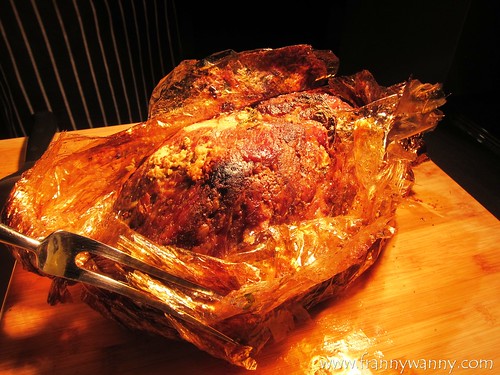 The Zebu was presented in such an interesting way. It's wrapped in a special cellophane paper which is said to contribute to the tenderness of the meat. Coming from Brazil, the Zebu comes from the hump of the cow and it's really popular especially in all local Brazillian churrascarias. I like the light pinkish note and the thin layer of charred fat underneath the skin.

At this point, I was starting to get really full but I just have to stand up and go around the buffet section to take a peek. The beauty about The Carvery is that you won't get hundreds of food selection but it's really all about quality over quantity. Each item in the buffet were carefully selected to go very well with the roasted meats. 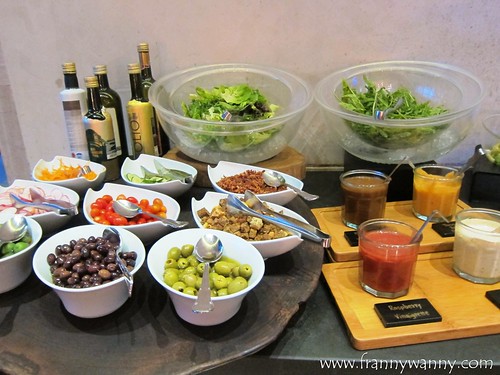 The salad section has your usual fresh greens which you can put together or a couple of pre-prepared salad for those who wants it quick. 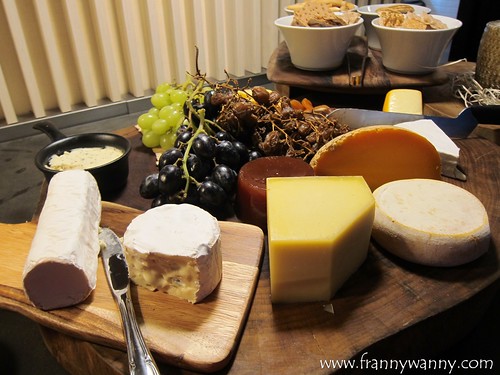 Then there's a small section on fresh seafood but I guess this is one buffet where the meats really take center stage so take my advice and please save 80% of your tummy space for the meat. There's also a cheese selection for those who wants to nibble on some cheese and fruits in between plates of steaks. I did this and I really love the soft cheeses available. 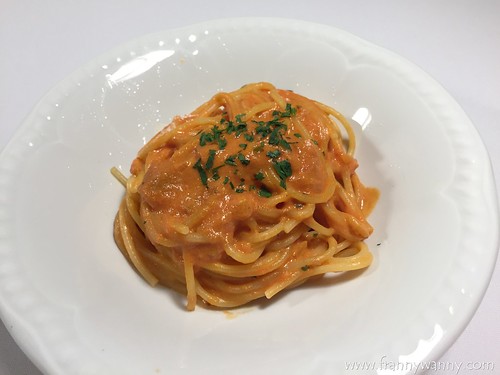 There were more than a dozen sidings and hot dishes such as the Beef Bourguignon, Roasted Garlic, an assortment of Potato dishes, Sauteed vegetables, Grilled Fishes and more. They also have a small Pasta Station where your pasta dish will be prepared a la minute. There were two types of sauces -- pomodoro or creamy carbonara. I requested that the Chef combine these two for me which he gladly did. I have to say that it was really good. The pasta noodles were al dente and the sauce has a nice creamy and tangy flavor which wasn't too sour nor too rich and heavy. I tell you, I'm really awful with buffets as I tend to load up on all those carbs but with carbs this good, I guess that's forgivable. 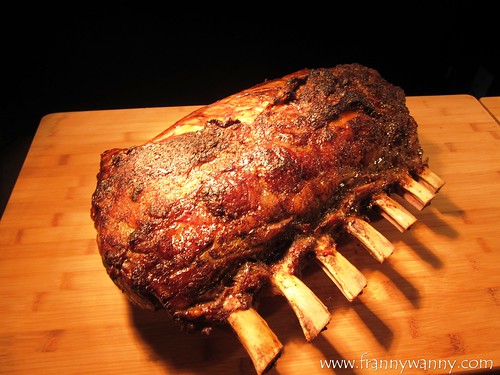 For our last two steaks, we had the Black Angus from the US as well as the New Zealand Short Ribs. This is probably the only one that I was most familiar with as we have a lot of Black Angus steak back in Manila and it's one of Papa's favorites too. One thing that makes the Black Angus so popular is its tenderness and smoky flavor which gives off this macho, manly-man vibe. This is probably what the gentlemen would have together with a glass of full-bodied red wine. 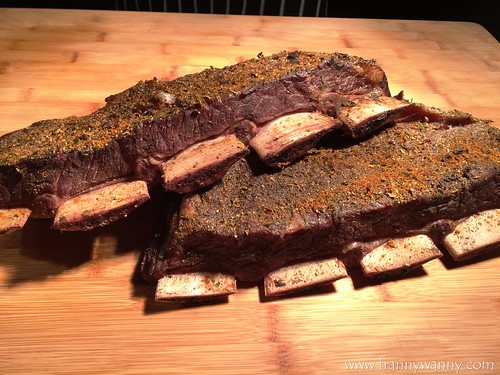 I also got to try the New Zealand Short Ribs which I was initially very excited to try. Somehow though, I found the meat to be so chewy and tough. I may have gotten the wrong slice but it was definitely my least favorite that evening.

In between bites and while doing random Pokemon catching, we all enjoyed our steak dinner and I have to say that this was definitely one of the best and most fun buffet dinners that I've had in Singapore so far. Writing this is making me miss all those yummy steaks even more that I think it's time to head back there with Paul in tow.

So what are you waiting for? You got less than a month to indulge in the best cuts of steak from all Japan, Brazil, the US, Tasmania and Australia. Check out The Great Meat Feast at The Carvery in Park Hotel Alexandra right away!