Souper Tang (汤师父) at The Centrepoint in Singapore

- September 27, 2016
It has been raining on and off for the past few days bringing down Singapore's temperature and making it feel cool and breezy for a change. If you ask me, days like these is the perfect time to just snuggle in bed and stay indoors all day long. It's also the time when I would crave mostly for a bowl of congee or soup. 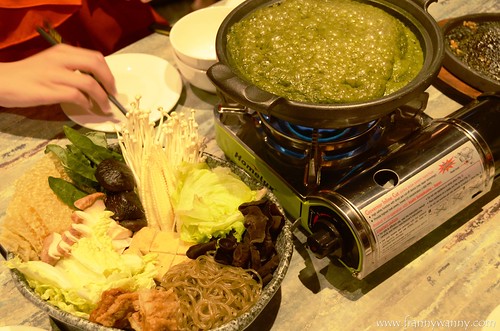 Luckily, there are a lot of options when it comes to satisfying our craving for soups and congee. A few months ago, Paul and I visited the first ever outlet of Souper Tang here in Singapore. Souper Tang (汤师父) originated in Malaysia where it has a total of 18 outlets scattered in Kuala Lumpur, Malacca, Ipoh and Johor Bahru. Apparently, Souper Tang originated as a TCM medical hall where the owners would sell herbal medicines for all types of illnesses. Then the lady owner would cook put together soup packs which she would give out as gifts to friends. Later on, it got so popular and people would request that she would sell her soups. This was when Souper Tang was born. 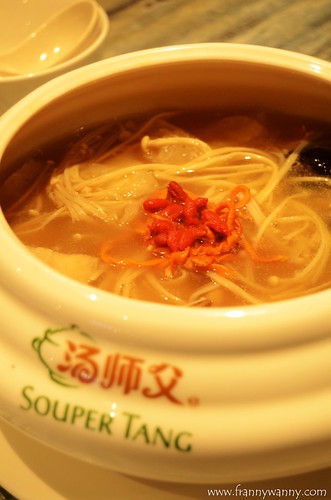 Our dinner began with the Souper Tang Signature Soup (S$26.90 for two / S$39.90 for four) which is a really nutritious soup packed with 7 different ingredients namely : conpoy, shiitake mushrooms, American ginseng slices, ginseng root, cordyceps flower, fish maw and chicken. It's a bowl overflowing with all these premium fillings that is said to regain vitality and has anti-aging qualities. Oh, I wanna load up on this!

Taste-wise, I love the richness of the soup broth. Really, I'm not one who loves drinking a lot of soup especially when it comes with a lot of filling. Normally, I'd finish all the filling and I'd end up so full that I can barely drink the soup. This one though, the soup was just so good that I didn't let a single drop go to waste. In fact, this was one of my favourites that evening. 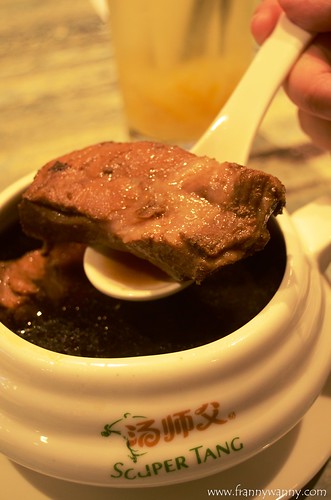 Another winning soup was the Shi Quan -- The 10 Herbs Soup (S$13.90). I love anything with pork spareribs and this one comes with 10 different types of herbs said to help cure insomnia (not that I really need it haha) and helps reduce vertigo too. Normally, adding too much herbs can make the soup stock bitter or too medicinal but surprisingly, this one remained to have a nice sweet taste. It must be due to the angelica root or the tender pork ribs which was cooked for hours till tender. The size is quite big as compared to most herbal soup bowls sold in hawker centres. The price is a bit higher than usual but if you're able to enjoy this at an air-conditioned and clean place then why not, right? 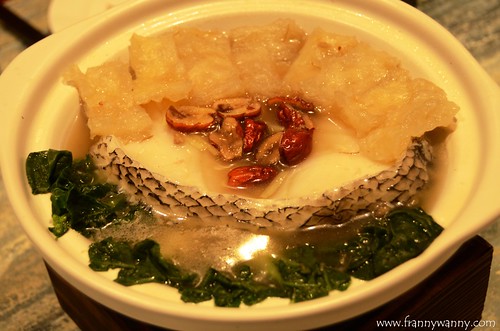 Aside from soups, Souper Tang also has a number of main dishes too. We tried the Claypot Atlantic Codfish Maw (S$29.90) which was tender but a bit too boney to be fully enjoyed. I somehow got tired trying to remove the teeny bits of fish bones in order not to swallow it by accident. Just be extra careful when having this. 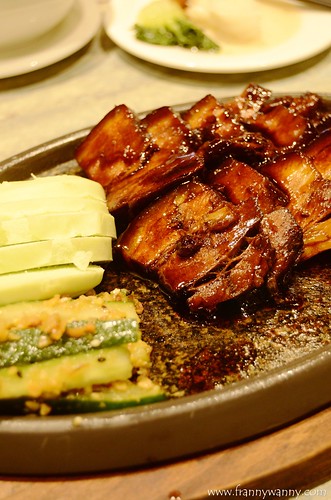 For meat lovers, you shouldn't miss the Home Braised Pork in Rich Dark Sauce (S$18.90). This one comes with really fragrant pandan mantou buns and the pork slices which is very similar to that of a hong ma with mantou bun. Yummy yummy! Paul enjoyed this a lot which was pretty much a given since he loves his hong ma (braised pork belly) and mantou since way back. 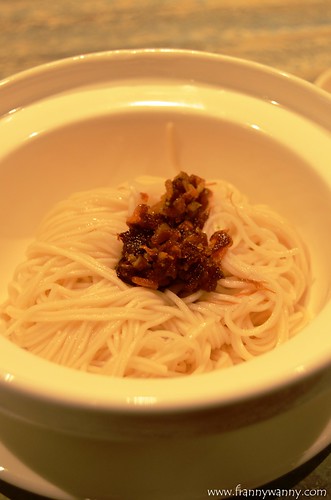 Now, here's a big shocker. To go with our dishes, we had the Mee Suah Tossed in Abalone Sauce (S$3.90). Among all the oriental types of noodles, mee suah or misua is my least favorite most especially when it's served in a soup. I really am not fond of anything too nua (mushy) and do appreciate noodles with a firmer bite. So, except for our traditional birthday cha misua which my mom and my kongkong makes so well, I would go for bee hoon / bihon, sotanghon / vermicelli or even kuay teow any given day.

So yes, going back to the Mee Suah Toassed in Abalone Sauce, I wasn't really expecting to like it but after one bite, I was proven wrong. This one was delicious! I love how the noodles has a nice springy texture and it has a strong savory flavor from the homemade XO and abalone sauce. It's a bit on the oily side which I love love love too! For only S$3.90, I will definitely order this to go with whatever I may end up ordering at Souper Tang. 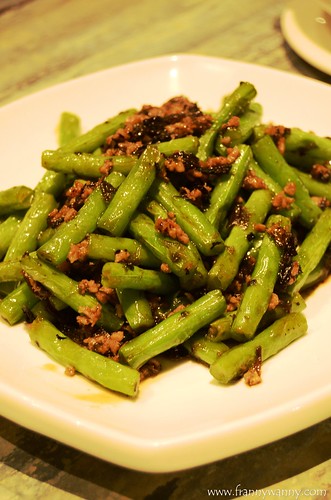 For our veggies, we got the Stir-Fried French Beans with Pu Er (S$11.90). Who doesn't love french beans? It's a simple, straightforward veggies that's so yummy! The pu er tea flavor is very mild so you might even not be able to detect it. Nonetheless, this is a good dish to go with the mee sua.

Here in Singapore, it's customary for kids to drink essence of chicken which is said to help with their over-all well being and most of all to help improve concentration. I tried it when I was really young and it definitely wasn't my thing. Guess this is why I have the attention span of a goldfish. I should have drank all those bottles of chicken essence. 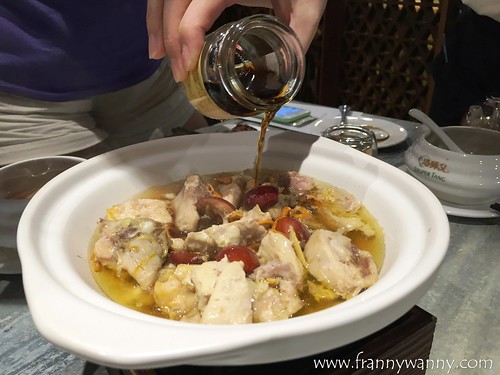 Kidding aside, our next dish is the very nutritious Stewed Chicken Cordyceps Flower and Essence of Chicken (S$19.90). I tried a small bite and sadly I'm really not a fan of the strong essence of chicken flavor. It has an acquired taste so go try it and who knows, you might like it. :) I really tried to like it but since I didn't liked the sauce, I loaded up on the ingredients inside which is so good for our health! There's the free-range chicken with ginger, goji berries and red dates (my favorite!). Wish they'd do another version minus the chicken essence. 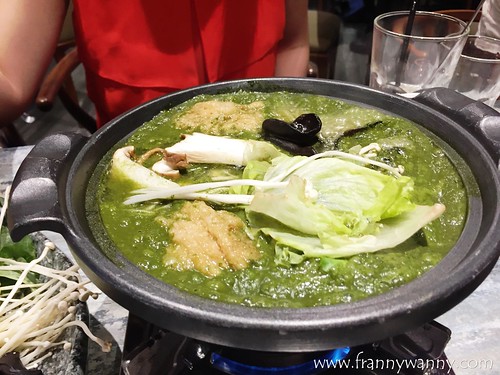 For the main star of our meal, we had the Signature Souper Pesto Pot (S$25.90). It's a huge steamboat pot that's good for 2-3 pax to share. It's also vegetarian friendly as this whole pot is loaded with all types of vegetables from Chinese spinach, corn, enoki and eryngii mushrooms, beancurd skin, beancurd sheets, tau kwa, black fungus and red sweet potato noodles. The soup was also very delicious as it's a yummy mixture of basil, mint, laksa leaf and pine nuts. It's actually a cross between a pesto sauce and the type sold with the Thunder Tea rice sets. Yum! 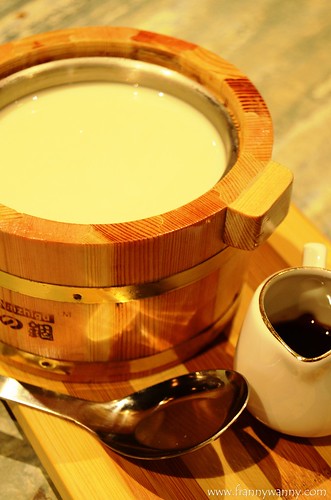 For dessert, we had something very familiar! It's a silky tub of Caramel Ginger Beancurd (S$3.90) which looks so much like our local taho/tau hue. It's the same warm beancurd pudding served with a generous portion of caramel ginger sauce. If you don't like the ginger-y taste then you can go with the Caramel Beancurd (S$3.50) which doesn't have that spicy kick from the ginger.

Personally though, I like the Caramel Ginger Beancurd as the latter one was just too sweet for my taste. I wish they'd serve this with sago to cut the silky and creamy texture of the beancurd.

I love Souper Tang made sure that you get to enjoy your meal from start to end. From their soups to their main dishes and finally to their desserts, most of the dishes that we had were well executed and the fact that it's packed with a lot of nutritious components make it extra special.