- December 21, 2016
As the saying goes: "Two heads are better than one." This rings true in the foodie world and it's always a fun thing when two kitchen masters get together and make one yummy creation after the other. So here's a secret for you all. Our well-loved Wolf Burger partnered with Bird Bird and we're all in for a treat at their special pop-up restaurant in Ann Siang Road till the end of 2016. Now, isn't that a great way to end this year? 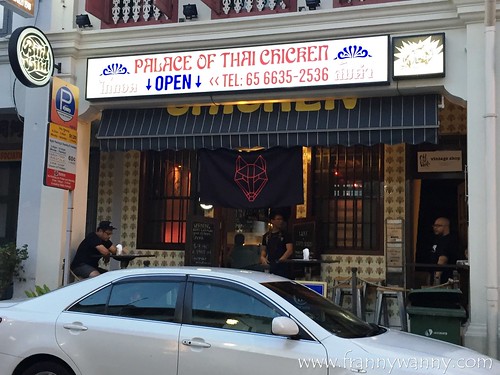 While I truly hope that their partnership will go on till next year, Paul and I are not taking any chances and we quickly made our way down there one weeknight to check it out. I first tried Wolf Burger at Pasarbella Suntec City  and I have been reminding myself to make a return trip with Paul soon. Anyway, as with any secret pop-up shops, spotting the restaurant might be a bit tricky. The best way is to head down to where Bird Bird used to be (well, it still is Bird Bird..) and tadah! you've reached your destination. Just look for the Bird Bird lighted signage (see photo above) and I think you'll get there in no time. 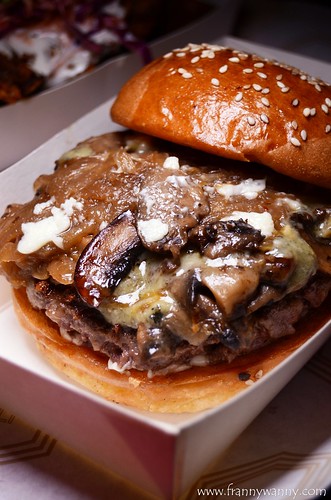 The menu was quite simple and straightforward. Despite that, I still had a hard time choosing what to order as everything sounds really interesting and yummy. Paul then came up with the idea to just get one that is uniquely Wolf Burger and another that's definitely a Bird Bird creation. That's easy! Beef x Chicken! I zeroed in on the Double Truffle Mushroom (S$20) which again was up against the The Wolf Wagyu (S$23) which was highly recommended by our server. However, the word "truffle" won me over plus it had "double" in there too. More truffles, more fun! 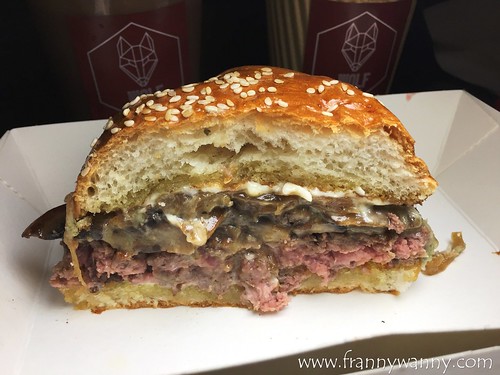 I have to say that I knew we made the right choice from the moment we laid eyes on our burger. It's a huge sized burger with thick chunky beef patty and topped with fragrant truffled porcini mushrooms and blue cheese. I was a bit worried that Paul might not like the blue cheese but he inhaled his share in no time so I guess that was totally well-received. *phew* As for me, I LOVED IT! It's definitely one of the best burgers I've had this year and I'm so excited to head back to Wolf Burger for more more more! The beef was grilled just right and I just love the generous amount of mushrooms. I love that it's not overly loaded with toppings nor was it too fancy-schmancy thus losing the main essence of a burger.

In the spirit of Christmas and if you all will allow me to get cheezy, this is what I'd like to tell this burger:


We also tried Bjorn's Fried Chicken "Wurger" (S$16) which is pretty much the sandwich version of "chicken and waffles" done Asian-version. Doritos-crusted fried chicken served on top of a fluffy piece of waffle and accompanied with heaps of sweet thai chili slaw and coconut sour cream. First of all, the best way to enjoy this is to eat this while it's hot. Don't leave it out till it gets cold as the crust may get too hard to be fully enjoyed. 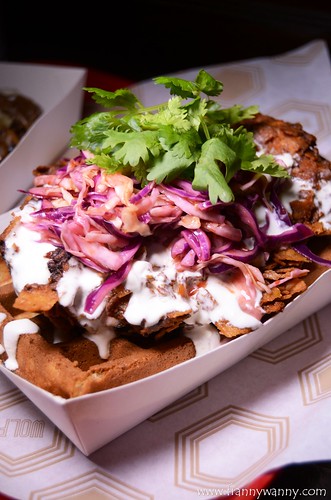 I love the strong Asian flavor in this Wurger. The coconut sour cream was yummy while the coleslaw was a bit too spicy for me. Paul loved this though and we thought it was a very clever creation highlighting Chef Bjorn's ultimate specialty -- Thai Fried Chicken. Our server also recommended Chef Bjorn's Beef Wurger (S$20) which I would love to try if only this pop-up will still be around when we get back from our holiday trip.

Of course, every hero must have a side kick and so the main stars of this pop-up also have a good variety of side dishes. The plan was to get two side dishes to accompany our two mains but I couldn't help it! I had to get one more.

Check out the gang! We had the Doritos-Crusted Bacon-Wrapped Mozzarella (S$8), Truffle Fries (S$8) and Candied Bacon Chips (S$8). 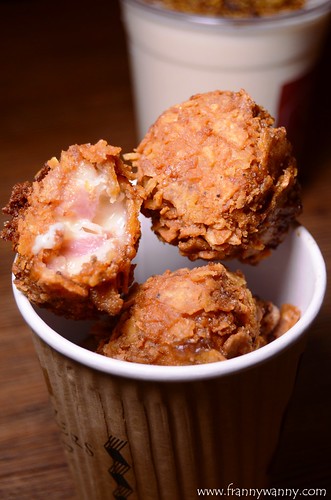 My first choice was definitely the Doritos-Crusted Bacon-Wrapped Mozzarella. Why not, right? It has two things that I love most in this world -- Doritos and Mozzarella. I can never say no to bacon too. Paul was busy taking photos of this then I suggested that I should "bite" into it to show you all the inside. Haha! Smart move huh? ;) I quickly bit into it and I love how the cheese somehow oozed out. Don't expect the lava-kind of oozing to happen but the creamy cheese filling perfectly complemented the crunchy coating. Similar to the fried chicken, eat this while it's hot as it can get hard as it turns cold. 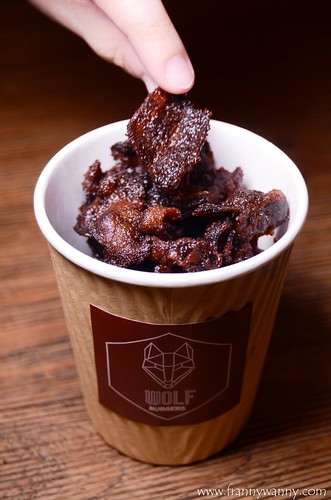 Following this was Paul's choice -- Candied Bacon Chips. You all know that I'm not a big fan of bacon but Paul is. He pretty much emptied this cup out and said that it was really yummy and addicting. 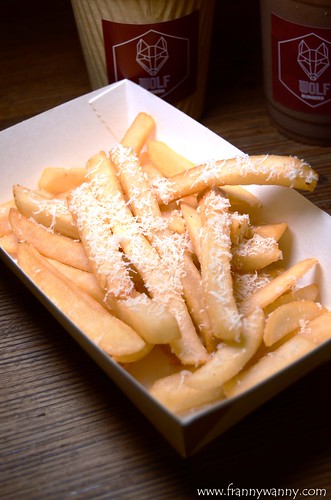 Lastly, I just had to get some Truffle Fries. This was perfectly executed and we could immediately smell the strong truffle aroma as it was served on our table. As well all know, you can never go wrong with truffle fries and no matter how many sides you may end up ordering, do not miss out on this. 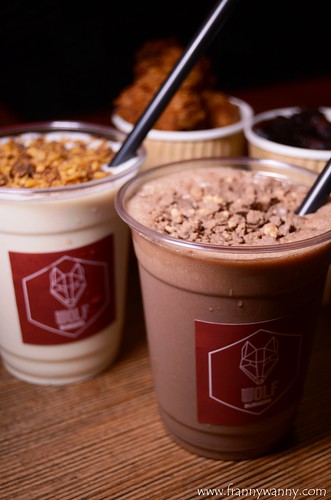 I love the laid back vibe of this Pop Up Restaurant where you can relax with friends or your loved ones over burgers, sides and what's missing? Drinks! Beer might be a popular choice especially for the after office crowd but they got a couple of interesting Milkshake creations too. Choose whether you want it done the "innocent" way or have it spiked with some alcohol! We tried the Horlicks Vanilla Milkshake (S$6.5) and the Dark Chocolate Milkshake (S$6.50) where I prefer the former over the latter. I love how the Horlicks Milkshake was topped with bits of cereals making it taste so much like cereal milk. It's so yummy! The alcoholic version is spiked with Baileys (S$12.5). As for the Dark Chocolate Milkshake, I found it a bit too bitter to be fully enjoyed. Perhaps, it's perfect for all dark chocolate lovers and if you're feeling a bit adventurous, have it spiked with Kahlua (S$12.5)

We're 10 days before the end of the year. Hurry and head over to Ann Siang Road to try this interesting collaboration.