April 01, 2013
Allow me to make another bold foodie prediction for the year.

The last time I did this was a few months ago when I predicted that ramen will be the next BIG thing here in Manila. After I said this, then came in more ramen franchises from all over the world. So far I've tried 3 of them and loved them all equally. You can read about it here and here. I heard from foodie friends that there will be about 2 to 3 more ramen shops that will open their doors here in Manila this 2013. What a fun year for ramen lovers out there! 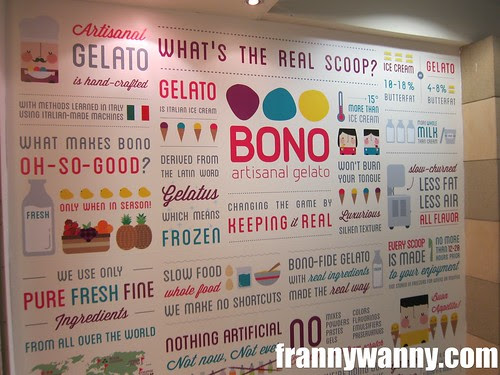 Aside from ramen, there's one brand that has been spreading around the foodie world like wildfire. From the moment I arrived in Manila, friends have been messaging and texting me about it. The name is BONO. Initially, I thought it has something to do with the Irish singer of the band U2. Probing further, I was told that it's a local gelato brand that's located in SM Makati. The way friends talk about Bono was enough to convince me that I shouldn't leave Manila without giving it a try. 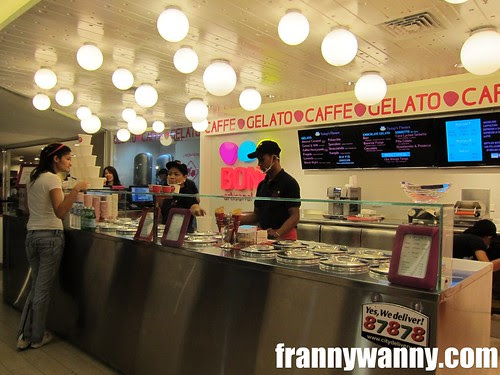 Finally, the opportunity came for us to give Bono a try. After our disastrous Easter Sunday lunch (more about this in my next entry) yesterday, my family and I headed to the new Glorietta Mall to hang out. Paul, Pan, Elton and I excused ourselves to visit Bono. While the adults had coffee and cake, we "kids" wanted our gelato!


It wasn't difficult to spot Bono as it was conveniently located at the entrance of the bridgeway from Glorietta Mall to SM Makati. It's at the 2nd level and you'll surely catch the bright white lights coming from the store. I love how the menu is listed on an flat screen. So modern and very organized. There are 17 flavors to choose from that day and silly me, I just focused on the first screen and it was only after a few trial scoops that I realized that there were more flavors available including non-dairy (Sorbetto) ones! 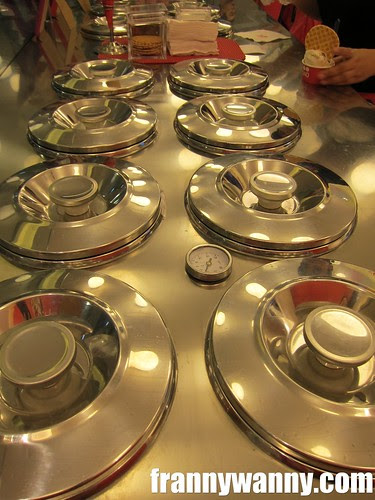 Anyway, the best way to choose the right gelato flavor for you is to try it. Don't be ashamed to ask the server to give you a samples of any of the flavors in your shortlist. For me, I was able to try the Speculoos, Pistacchio, Movie Night (Potato Chips + Caramel) and their Easter Special, the Ube Mango Tango. I don't know why but I'm loving how the gelato are kept inside these tin containers. It just gives me this feeling that it's really clean and hygienic when done this way. 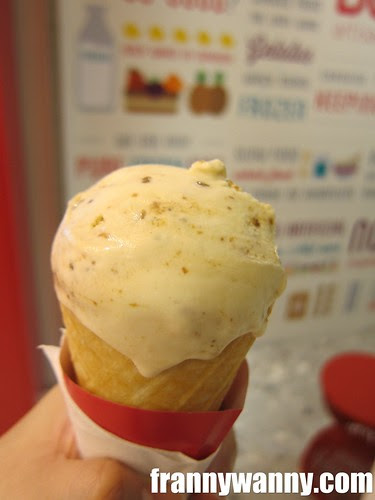 Finally, I made my decision to go with the Speculoos Gelato. Obviously, my companions were not surprised considering the amount of Speculoos Cookie Butter that I've consumed throughout my short visit home. I'm heading back to the Lion City a little bit heavier and we exactly know where those extra pounds came from. :) No regrets though as I'm crazy about Speculoos and I'm not passing up the chance to have this in gelato form. 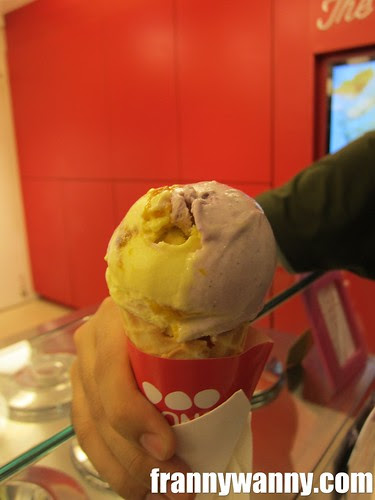 Paul, on the other hand, liked the Ube Mango Tango! This was actually both Paul and Elton's choice as they both said that it tasted like our local sorbetes (a.k.a. dirty ice cream).

What I love about Bono's Gelato is that it has a very creamy texture. We were told that they make use of fresh milk thus having lesser butterfat than your regular ice cream. This is probably also the reason why I noticed that it has no icycles and it drips a wee bit faster too. I'm fine with that as I really enjoyed my Speculoos Gelato that I was licking it at record speed. I love how the gelato has chunks of Speculoos chunks that complemented the milky vanilla base. As we were lining up to pay, Paul noticed an enclosed glass room with this sleek looking machine inside. Inquiring what it was, we later found out that this is the Cattabriga Effe -- the gelato maker! It's actually my first time to see this as most gelato shops would have ready made gelato on display. This machine is actually the first in the country and there are just a few gelato shops in the world that uses this. Wow! Talk about getting world-class quality gelato. The folks behind Bono are obviously serious about their gelato.

I got to warn you though that with great quality comes a slightly higher price tag. One small tiny cup of gelato would cost you Php. 85. This is just about the size of a 4oz tasting cup.

Go slightly bigger and the Single cup/cone is worth Php. 130. Paul and I went for the Double cup with 2 flavors for Php. 200 and we requested that they split the two flavors and we just added Php. 25 for the additional waffle cone. That was a wa-is moment for me and I'm patting myself at the back.

Nothing beats enjoying a cup or cone of gelato in this scorching hot weather.