- June 19, 2015
Life is truly funny at times. Just when you thought you got some things all figured out, you then encounter one thing that's totally new that will make you doubt what you already know. Can you relate to this?

For years, Pan and I used to be loyal patrons of several Indian restaurants in Manila. We would feast over plates of basmati rice, paneer, butter chicken, curries and of course, our all-time must-have, papadum. For us, Indian food is all about curry and spices. We thought we know the Indian cuisine inside and out...well not until last night. 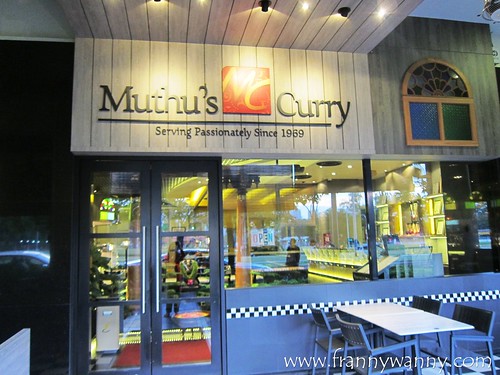 I was invited to try the newly-launched heritage menu at Muthu's Curry. A popular and rather upscale Indian restaurant here in Singapore. Muthu's Curry has been around since 1969! This means the restaurant is 46 years old -- 4 years shy from the country's year of independence. Nonetheless, being able to be around for this long is an accomplishment already given that not a lot of restaurant can have the same luck to even last for a decade. 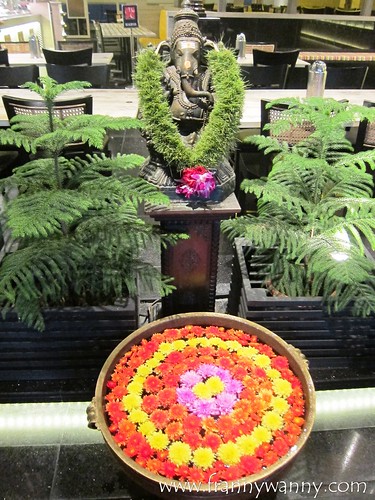 I was really early for dinner so I was able to take some photos of the restaurant's interior. As you walk in, you'll be greeted by this pot of colorful flowers and an elephant statue. I was told that they have recently renovated the restaurant to bring it closer to its roots. Prior to this, the restaurant used to sport a very modern look which I guess didn't connect well with the over-all concept of highlighting traditional South Indian food. 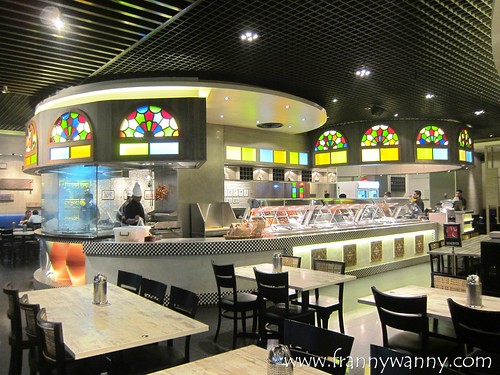 There are two ways to order your food. First is to visit the glass counter where you can see all the different dishes available or simply grab a menu, sit down and place your order with any of their friendly and extremely helpful (more on this later) servers. 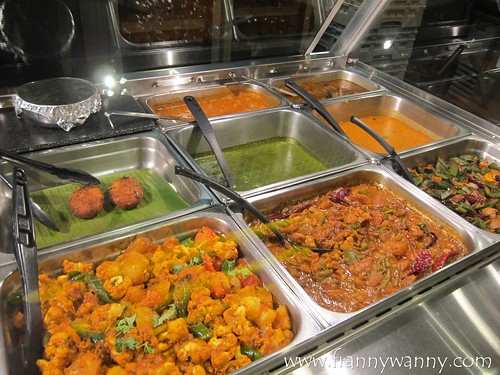 We were to try the set menu but that didn't stop me from checking the glass counter out. Somehow I feel that most Indian dishes have a reddish orange color. Don't you agree? From meat to seafood and even to veggies, majority are of the same hue. 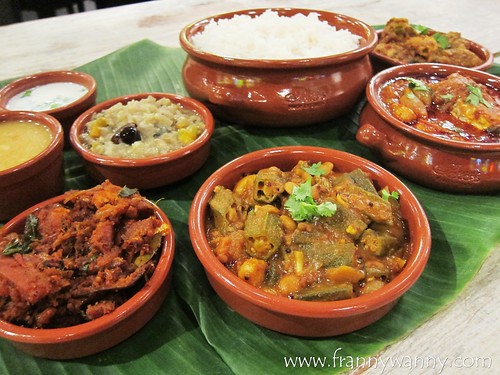 The Mannuvasanai menu (S$32++ for 2 pax) consists of 5 dishes that were specially chosen as these represents the traditional South Indian (Chettinad) home cooking. Each dish makes use of a multitude of spices and I was already warned that majority can be a bit spicy. Okay, I'm ready with my glasses of water and lime juice! Not to mention, I had my eyes set on the Mango Lassi for dessert later on. Instead of regular plates, we were given a huge banana leaf which we will use as our plate. This reminds me so much of the traditional Filipino way of eating too where we enjoy our meal with our bare hands and we put our food on a banana leaf too. It's interesting to note such similarities between two very different cultures.

Let me go through the five different dishes that we sampled that day: 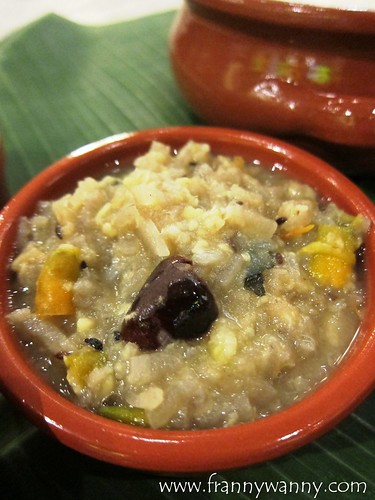 Vazhathandu Kootu (pronunciation: val-luh-thun-doo koo-tuh)
This is like the starter plate of banana shoots and lentils. It was very refreshing and light despite having a bit of spicy. I'm really a fan of anything with lentils that I even enjoyed eating this with naan, chapati or even some papadum. In other words, I like this a lot! 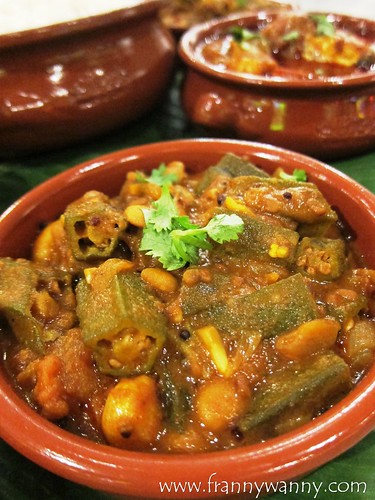 Vendaikkai and Mochai Mandi
Oh, this dish is not for the faint-hearted. As you move on from the 1st dish to the 2nd, you'd expect a gradual increase of spicy level, right? Sadly, this one zoomed straight to the top. It was very spicy for me given that I only had one bite. Not really a hand of lady's fingers so I carefully just fished out the white kidney beans and other veggies instead. 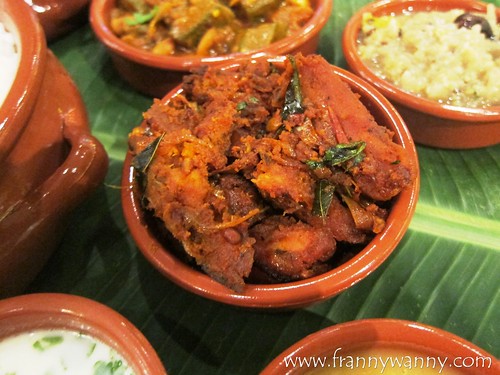 Vazhakkai Varruval (pronunciation: val-luh-kai va-ruh-val)
I really had to ask how to pronounce this. Why? It's to help me order this on my next visit. I loved this! Believe it or not, it's made with unripened bananas which were marinated in turmeric, chilli powder, cumin, fennel and coriander. It's interesting to note how banana seems to be a popular ingredient in Chettinad cooking. I think I must have finished most of this dish too. Oops, sorry L! 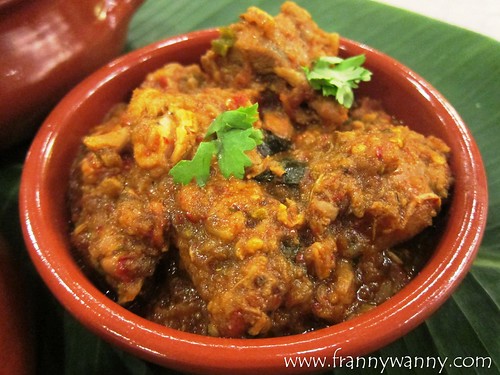 Milagu Varutha Kozhi (mi-laa-gu vaa-roo-tha ko-li)
This is a traditional chicken dish cooked with masala and peppers giving it that spicy kick that you'll instantly feel on your first bite. This is the kind of dish that I'm really annoyed with. You see, it's so good but it's so spicy too! So either I stop eating after the first bite if I'm too chicken to take the heat or I load up on milk/water/lime juice/rice/ice cream/yogurt just to tame my flaming tongue as I continue eating. *sigh* What a big dilemma this delicious chicken dish has caused. Tsk tsk.. 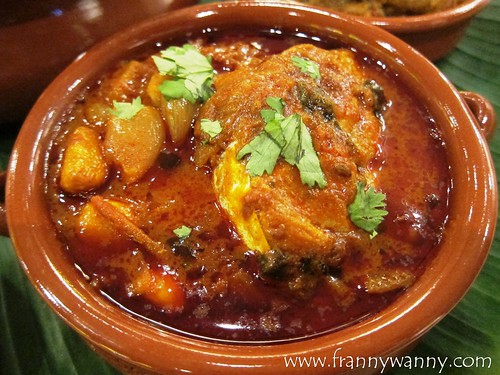 Vanjaram Meen Kulambu
For the last dish, its a pot of fresh mackerel cooked in curry. I was told that this is even spicier than the chicken but surprisingly, I didn't had much problem with the heat level of this one. Either the Chef went easy with this or my taste buds are playing tricks on me. Haha! Nonetheless, the fish was very fresh as the meat was tender and free of any odor. Yummy!

Together with the dishes, we were given a small bowl of Homemade Buttermilk. This is very important as the milk helps lessen the spiciness of the dishes. It's also mix with coriander, cumin and mustard seeds giving it a nice subtle savory flavor. The importance of having buttermilk is to let it help your digestion and it brings some cooling effect to the body too. 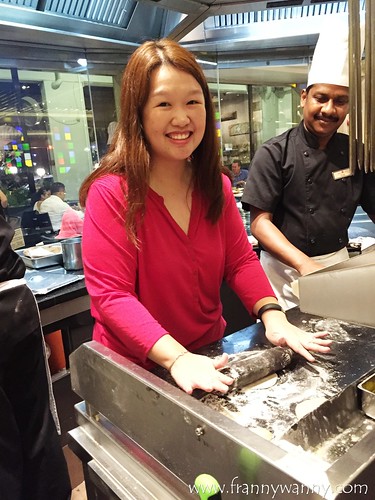 After we're done with trying all the dishes, we all took turns in making our own Chapati. In contrast to naan, chapati is an unleavened flatbread that's very popular in Southern India. I have been seeing chefs toss and roll dozens of chapati dough whenever I get to dine in an Indian restaurant and I really thought it was pretty simple. I was so wrong! Each push and pull of the rolling pin must have a good amount of strength and precision. On my first try, my dough wasn't flat enough and on my second, it came out oddly shaped like Casper the Friendly Ghost. Oops! I obviously need more practice.

Here's the finished product of my fellow blogger D who has a better future in Chapati-making. :P 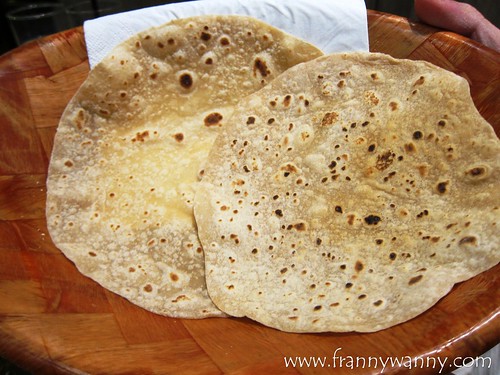 Now, about the service rendered. I really have to say that all the servers were really attentive. Sure, we went for a food tasting but I've been observing how they've been equally quick in responding to the requests of other diners. I hope that service will remain this good on my succeeding returns.

Tonight was indeed an eye-opener about a new culture totally different from mine. It has widened my knowledge about Indian food and the fact that there's more to Indian cuisine than the regular briyanis, naan, pratha and curries. By dining at Muthu's Curry tonight, it somehow felt like I paid a visit to a friend's house where I was able to try authentic South Indian dishes. I can't wait to go back and let Paul try all these yummy dishes.

Note: The Mannuvasanai menu is only available in Muthu's Curry Race Course Road from 15 June to 31 October 2015.