- December 26, 2018
I'd say that when you look at the F&B industry, one of the easiest yet toughest cuisine to specialize on is Filipino. It's simply because every household has its own version of most of the local dishes from the adobo to pochero to sopas to sisig and to all types of pancit (noodles). I can boldly say that there's probably millions of adobo versions all over the country given that our population is now 104.9 Million strong (thank you Google!). That said, it would really take a lot for you to beat what one may have considered their best adobo/pochero/sisig. But hey, as the saying goes.. "if you got it, flaunt it." 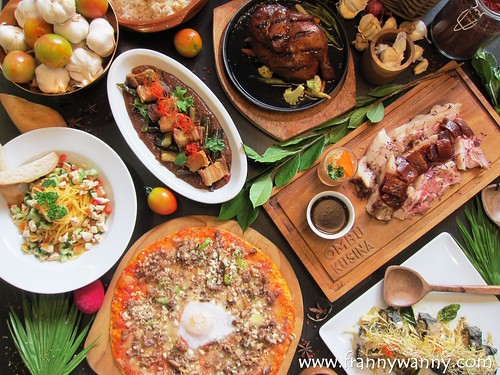 Recently, Paul and I stumbled upon Ombu Kusina near Timog Avenue. It's at the Ground Floor of Sequoia Hotel as the restaurant also operates as the F&B arm of the hotel. We were invited to try their newest menu items and luckily, some of their best-selling ones too. I've heard of Ombu Kusina from fellow bloggers when it opened a few years back. We were still based in the Lion City then and given the short period of time that we always have when we're back home, travelling all the way to Quezon City barely gets included in our trip itinerary. 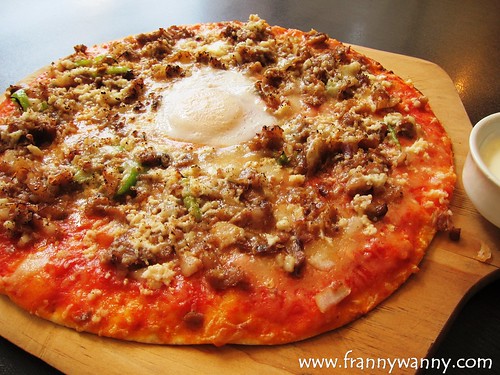 Anyway, our lunch began with their famous Sisig Pizza (Php. 520). Remember that Paul's family hails from Pampanga, the land where Sisig (chopped roasted pig's ears) originated so you can just imagine how picky he can be as his standards are way up there. For him, sisig with mayonnaise is a no no, sisig with chopped liver he tries to avoid, sisig without that "crunch" will never make the cut. So, whenever we get to have sisig at any restaurant outside Pampanga, I'm normally very worried whether or not he'll like it. Well, what do you know?! Paul enjoyed Ombu Kusina's Sisig Pizza as he said was very flavorful and it has that nice spicy kick which a lot of restaurants tend to disregard. It's presented as a pizza so perhaps he was a bit more lenient as you can't expect to get the smokey crunch compared to when it's served on a sizzling plate but what he enjoyed the most was the garlic sauce that was served with it. I personally just love pizza and this one was pretty good. 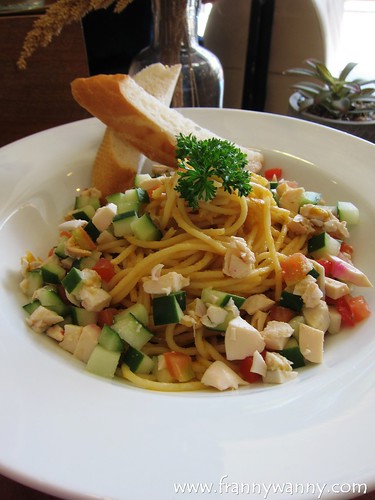 Moving on, we had the Salted Egg Spaghettini (Php. 260). First thing I noticed was that they used the real thing. Chopped salted egg tossed into the al dente spaghettini noodles. It's actually very light and would pass as a nice pasta salad. We shared this with 4 other people on the table and sadly the serving wasn't the much for us to fully appreciate the flavor. Even if you got more dishes on the table, I recommend keeping it to 2 people sharing to maximize the taste as 6 is just way too much. That said, I can't say much about this dish as I barely got any noodles or salted egg. Next! 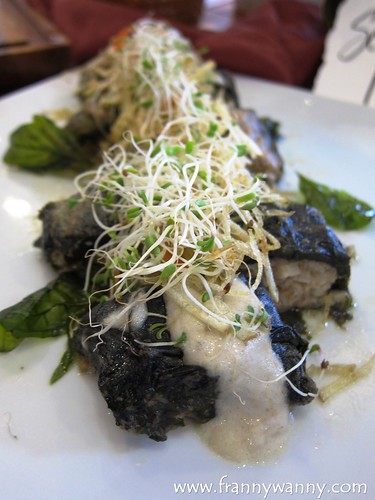 Luckily, Seafood Mix Laing (Php. 290) was placed right in front of me as if the waiter probably knew that I missed out on the pasta dish. I'm a huge fan of laing but what made me like this was how well the seafood filling, made out of crab meat and shrimp, complemented the gabi leaves and the creamy coconut sauce. It has a nice spicy kick which I love. Warning though as this will surely make you want to eat more rice so proceed with caution or better yet...pass this dish around for everyone to enjoy. I'm definitely going back for more Seafood Laing. 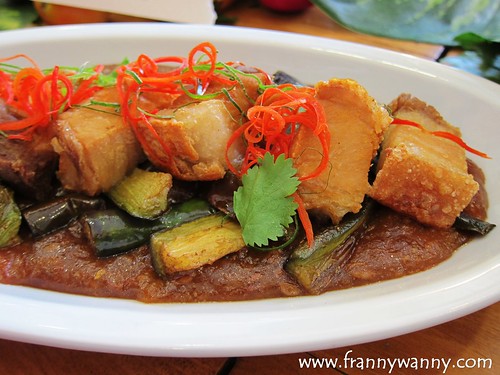 The Binagoongang Talong (Php. 300) was also a delightful treat. Fresh slices of eggplant with crispy fried pork belly mixed together in their homemade shrimp paste sauce. We love anything with bagoong and this is actually the one of the few ways to get me to eat eggplant so I was really lookingf forward to this dish. It was okay, taste-wise however, our only comment is how the sauce ended up way too thick and sticky perhaps the Chef went a little bit too happy with the cornstarch (gawgaw). It was a waste though as the sauce was really good and it would be nice to put a bit of it on top of our rice. Given that, it failed to bind the pork as well as the eggplant together since the sauce was just sitting at the bottom of the plate instead of coating the rest of the ingredients to give it a more unified flavor. We have given our feedback to the management who have relayed it to the Chef so I'm hoping by the time you guys try it, it will be so much better. Do let me know if you have tried it and your thoughts about it. :) 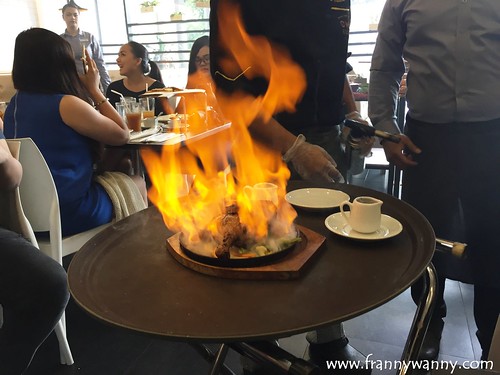 Moving on, the star of the show -- the Flaming Chicken (Php. 340). Each table was treated to a nice flaming show of this new dish. Half piece of chicken torched right by your table side. I honestly didn't expect much from this dish but I was so surprised by how tender it was. 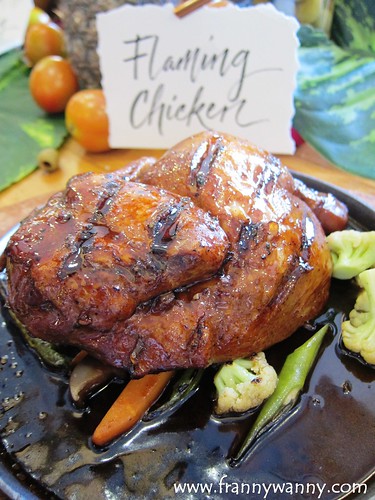 Yes, it was fork-tender and it was so flavorful too making it such a delightful dish. This is Ombu Kusina's way of welcoming 2019 with a bang (or a huge torched up flame). I highly recommend this dish. 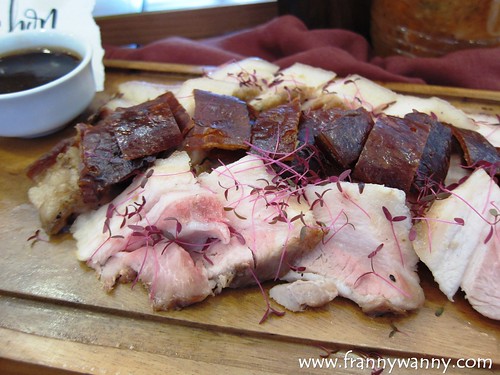 Next was the Adobochon (Php. 440). Homemade adobo-flavored lechon that's stuffed with all the yummy herbs and spices and slow roasted for 3-4 hours. Taste-wise, it reminds me so much of the Chinese cha siu (pork asado) perhaps because of the sweet flavor brought about by the adobo marinade. My only complain is how each piece is way too fatty for me to enjoy. I am have this habit of slicing off the fat before eating it so I'm left with such a thin piece of meat each time. Perhaps they can consider to do a slighly leaner version next time.

Just a note, I love the atchara that was served with it. I wonder if they sell that separately. :) 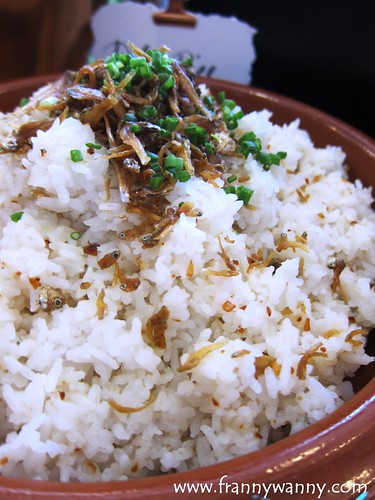 Of course, what's all these dishes without having a generous serving of rice. We got to try the Dilis Rice (Php. 80 / Php. 170) which was good. I like the sudden crunch that I get from the tiny crispy anchovies. Sarap! 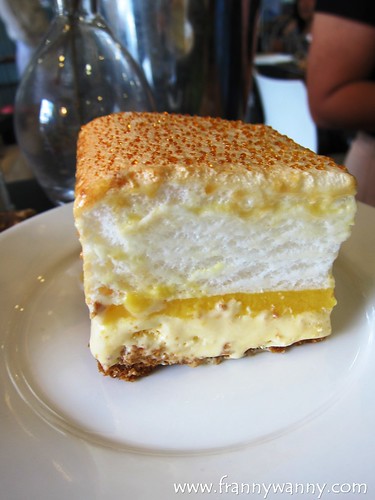 For dessert, we had Frozen Brazo de Mercedes (Php. 180). I'm personally not a fan of regular Brazo de Mercedes as I do not like the sweet custard filling and the egg white, marshmallow textured top but this version was good. It has the same texture as that of an ice cream cake making it easier to enjoy.

I'm glad to be able to discover Ombu Kusina and I'll definitely be back for the Seafood Mix Laing, Dilis Rice and the Sisig Pizza.