AMANO : Creations by the Hand

- July 06, 2009
Passion. This is one thing that I believe that will keep you going no matter what.

Take blogging for instance. I've been a blogger for almost eight years now. The first 6 years of my blogging life was centered on a personal site where I poured my heart and mind out into every single word that I wrote. It served as a documentary of my life as a college student and further on as I began to enter the corporate world. Eventually, I became less dramatic and realized that I want to talk about something that I'm totally passionate about -- Food and Travel.

As a blogger, I seek excitement in being able to share my day-to-day adventures with everyone. My heart skips a beat every single time I receive a new message from you, my dear readers. At times, someone would come up to me and ask where do I get the determination to blog regularly and I would simply say that blogging is my form of stress release. This is my way of unwinding after a busy day at work.

What's in a Name? 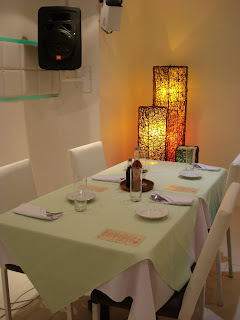 Last Sunday, Paul and I were invited to a food tasting session at Amano, a new Filipino bistro bar located along Tomas Morato. We entered the stylish looking restaurant and I immediately liked the minimalist feel of the place. Clean white walls with teal green accents, it speaks about being hip, modern and totally different from a traditional Filipino restaurant.

While waiting for the actual tasting to start, we had the privilege to chat with Amano's General Manager, Kelzo del Rosario, who eagerly shared with us the story behind the name Amano. As they where brainstorming on what to call their new restaurant, the owners all agreed that they want something distinctively Filipino but with an little touch of creativity. Finally, digging deeper into the Filipino culture, they chose the word Mano, which is an act of giving respect to elders and is actually a very typical local characteristic. Kelzo then thought of adding an A before the word Mano and with that, Amano was born. Wanting to make sure that they stay true to their first objective, a little research showed them that the word Amano actually meant by the hand in Spanish. Which matches the hand-crafted creations of the restaurant.

Amano focuses on dishes from the Southern Luzon region. Expect to delight your taste buds with specialties from Cavite, Laguna, Quezon, Bicol and even from Palawan. It's just like going on a food trip without leaving your seat. 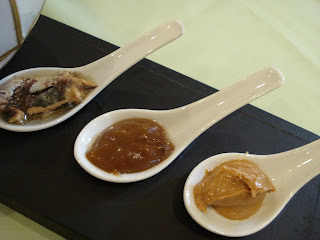 Our first dish was a Pandesal Trio Spread that consists of homemade Peanut Butter, Spicy Sardines and Coco Jam. This is perfect for breakfast together with a steaming mug of Batangas coffee. There's really nothing new about the three spreads but I guess it is just unusual to find this being served in a restaurant as an appetizer. 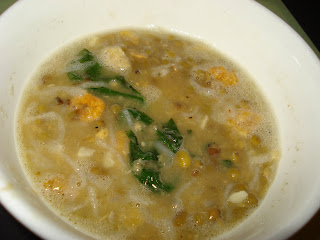 The second dish was my personal favorite. I love Monggo and I love Amano's version of the Cavite Monggo Soup that was cooked with vinegar and olive oil. It was served with chicharon, dried shrimp and fried bihon which gives the soup a crunchy texture. This is a perfect dish to enjoy on a rainy evening. 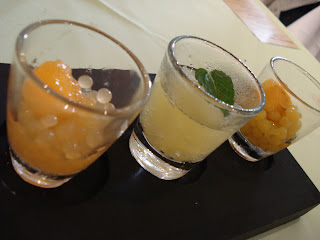 Another favorite was the Calamansi Sorbet with Fruit Caviars. One thing that you'll notice with Amano is the creativity present in all dishes be it from the name or on how the food is being presented. Served as an Intermezzo, this is a smooth cleansing break of Calamansi (local lime) sorbet and two shot glasses of mango and melon caviars. It's a very unique creation and a very colorful one too!

After the intermezzo, came the fiery Bicol Express served with Pineapple chutney and rice. I am not a fan of anything spicy but I couldn't help but take a couple of bite as I was Paul enjoy his own plate of Bicol Express. True enough, I felt the hot spicy sensation as it slowly crept down my throat but I'm glad to have the Pineapple chutney which helped neutralized the chili. Believe it or not, I will definitely be back for this dish. 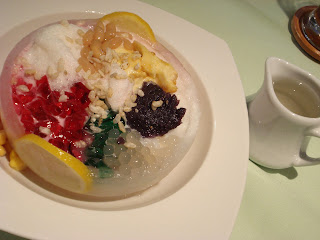 During our short chat, Chef Kenzo told me to save some space for dessert because the Amano Halo Halo is something he's truly proud of. I kept my promise and I was delighted to see a beautiful colorful creation served in front of me. Unlike the typical Halo Halo which is served in a tall glass, Amano have theirs enclosed in a frozen buko juice shell. I enjoyed digging into the milky leche flan, the sweet and chewy nata de coco and smooth ube halaya. They also served syrup at the side which I forgot to add because the halo halo was perfect as it was.

As dinner came to an end, the lights began to dim and the restaurant was transformed into a chic bar where one can unwind and enjoy the rest of the evening with friends.

While they are still experiencing a few pre-opening pains, Amano is a place that has a lot of potential given the passion that each one in the team has for it. In time, Amano will definitely be in full swing and be sure to drop by to experience it all for yourself.