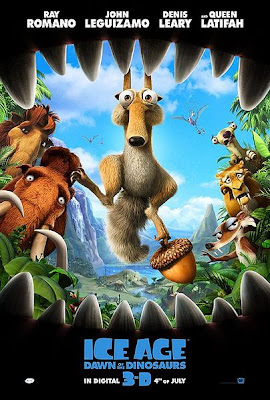 Unfortunately, Didi and Chris couldn't make it this week but this didn't stop me, Paul and Jane from meeting up in Trinoma as they launch the newest Digital 3D Cinema.

As we entered the cinema, we were given a pair of plastic glasses which we all have to wear to see the special effects on screen. At first, I found wearing the glasses a bit uncomfortable because of my bad eyesight and the fact that the glasses was too big for my face that it kept on sliding down every so often.

Trinoma's Digital 3D Cinema technology aims to create a whole new experience of movie viewing by providing bright, vivid visuals combined with crisp, clear surround sound that brings your senses to a different level whether you're seated upfront or at the very back of the theater.

The movie was short but it was a good one. Watch as Manny and Ellie await the birth of their cute baby mammoth, laugh as Sid creates his own "family" by nabbing three huge dinosaur eggs which was later discovered by the real Dino mom, and join Diego as he tried to leave the group to search for his own pack -- will this be goodbye for Diego? Hold on, then who's Buck? A new friend, who's a one-eyed weasel who fears no one...

I won't divulge any more details about this light, animated film to give you more reasons to head over to Trinoma with your family and enjoy ICE AGE 3 in 3D!
3D cinema dawn of the dinosaur friends geiser maclang ice age movie movie review thursday club trinoma