- November 11, 2009
It was a warm rather lazy Saturday afternoon when Paul and I arrived at The Stock Market in Bonifacio High Street. Even though we arrived on time, the restaurant was already filled with bloggers and friends who were invited to the Century Tuna event that afternoon. 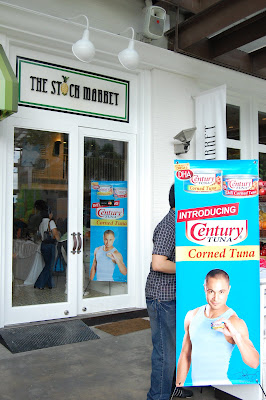 An earlier email informed me that I will be part of the Iron Chef-like competition that will be held that day. I sent my confirmation not knowing that they have also included Paul in the list. Hooray! Between the two of us, Paul is really the more talented cook as he can whip up a new original dish within minutes! I was so excited because I know we'll both enjoy this event.

The 12 chosen bloggers were divided into two groups and Paul and I were lucky to be placed in the same group. We were part of Team A together with our team leader Melo, and fellow chefs Sire, Alex and Karla. 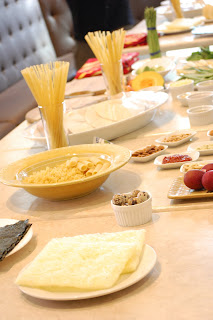 As soon as the mechanics were given, Melo called us in a huddle to discuss the two dishes that we're going to prepare. After surveying the table, we have decided to make Century Corned Tuna Canapes and Century Tuna Fusilli ala Aglio Olio style. Both recipes are easy to make and it greatly highlights the use of the themed ingredient which is the Century Corned Tuna.

We were assigned a chef from Century Tuna who guided us all throughout the way and who gave us the confidence to keep on going with her thumbs up sign and big smile. 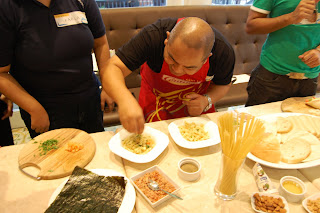 As the clock started ticking, Melo, Alex and Karla began to assemble the canapes while Sire, Paul and I brought out the pans and began to cook our pasta. It's a good thing that I've been reading a lot of food magazines that I have learned to pick up a thing or two about food styling. Using the plates provided by The Stock Market, we neatly presented our two dishes complete with garnish and the right toppings too. 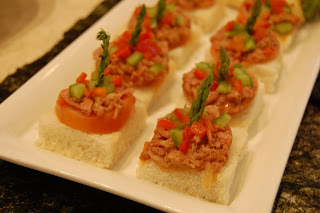 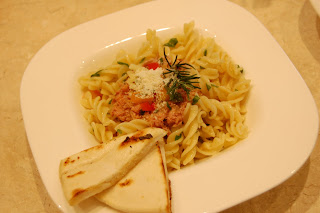 Century Tuna Fusilli ala Aglio Olio style
The competition was fun and truly a friendly one. At times I would even playfully peek over the shoulders of AJ who's from the other team as he was busy working on their pasta dish. 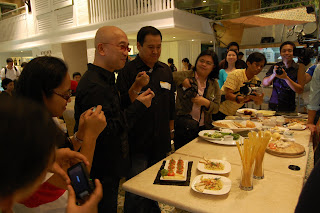 Finally, our one hour was up and it was time for our judges to try our masterpieces. The judging team was composed of fellow bloggers DocGelo and Ariel, Century Tuna models and executives. I can feel my heart racing as I truly believe our dishes stood a change but just like in every competition, after giving your best, you leave the rest up to... luck. :) 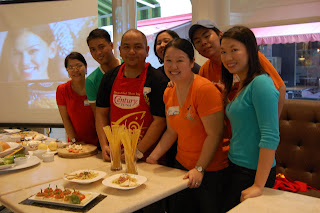 Just like in any competition, you win some and you lose some. My team may not have been that lucky in bringing home the prize but we sure had a fun time while preparing these two yummy tuna dishes using Century Corned Tuna.

Congratulations to Team B! :)