- January 23, 2010
It was during our 3rd year in High School when Ne and I were assigned to sit beside each other. While I've known her since we were in Grade School as our younger sisters were classmates then, it was only in high school when we found ourselves on the same class. N's your typical quiet diligent student while I... well... I just love to talk and talk and talk.

I guess our teachers back then thought that by putting me beside N would finally make me keep quiet and give more attention to the teacher... well, they were wrong! (haha!) While N still remained the diligent type, let's just say she found a chat buddy in me. During class we would pass notes once in a while or more like whenever we're really really bored and eventually became really good friends. It's amazing how we can talk for hours and hours despite the fact that we see each other every single day. 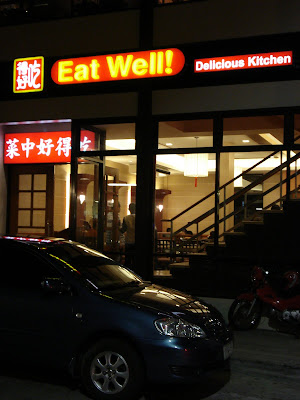 Graduation came and we went to different universities. She turned out to be a budding licensed CPA while I made use of my love for talking (and writing) and took the brand management path. It was only just recently when I received a text message from her asking how I'm doing already. Immediately, we arranged to meet up and so we agreed to try out the new Chinese restaurant in Greenhills called Eat Well!

From the outside I like the brightly lit red-yellow signage that will surely catch your attention even from afar. Inside, the restaurant has a very casual ambiance but with a touch of the traditional Chinese restaurant as I can here instrumental Chinese music playing in the background. While waiting for my friend, I scanned the menu and I actually liked the photos showing a couple of their highly recommended dishes.

N arrived shortly and after saying our HIs and Hellos we immediately updated each other with our lives. We had to stop ourselves first to order and resumed with our stories right away.

Service was fast here. It's a good thing that we were seated at the ground floor where there were a lot of servers waiting to respond to our requests. It was easy to order as N and I agreed on almost the same things. 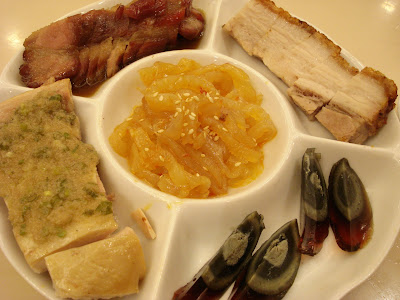 For starters, we got the Cold Cuts Platter (Php. 280). This has a combination of white chicken with a generous serving of my favorite garlic-ginger sauce, pork asado, century egg, jelly fish and the delicious yet sinful lechon macau. Since our rice also were served right away, we actually use this as another viand to our meal. From the platter I particularly liked the tender white chicken simply because of the flavorful sauce that came with it. The lechon macau is also something that they can be proud off because they have successfully kept the skin crispy and the meat soft and tender too. I'm glad that the pork was pretty lean with just a small amount of fat making it more delightful to have. 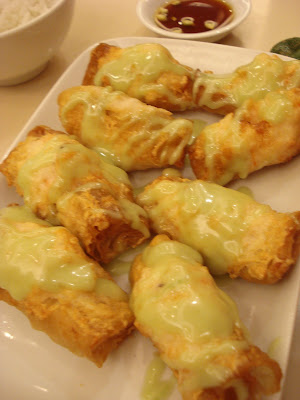 Next came the dish that really caught my eye as I opened their menu: the Shrimp Puff with Wasabi Mayo (Php.288). While this may not be traditionally chinese, I'm curious as to how well the wasabi mayo can mix with the crispy shrimp puff. With 8 bite-size pieces per order, this is actually good for a group of 3. I enjoyed biting into each shrimp puff as the minced shrimp was enveloped in between a crispy Chinese-style puff pastry very similar to the You Tiao (long deep-fried bread) that Paul and I would normally would have with our congee. The wasabi mayo was a good addition to the shrimp puff as it adds a special zing to the over-all taste of this dish. 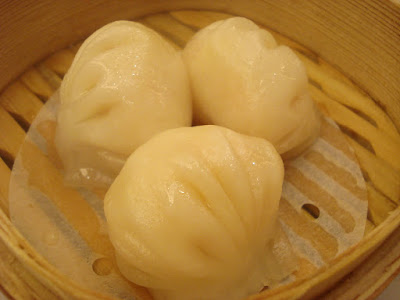 I love dimsum and it's a good thing N was game to order too! We both got a basket of hakao (Php. 130) (shrimp dimsum) to share. One order comes with three hakaos that we both truly enjoyed. However, I noticed that they had minced shrimp inside instead of the usual whole crisp shrimp. The wrapper has a good consistency though, not too soft and mushy and not too thick and rubbery. Maybe we'll just stick to the main entrees on our next visit.

Over pretty good Chinese food, N and I swapped stories dating back from the time we went to different universities and along the way discovered that we shared a couple of mutual friends and learned more about what we each were both doing in our careers now. I promise to finally introduce Paul to N before our big day so this definitely calls for another (or even more) dinner dates in the coming months.