December 30, 2010
Here you leave Today and enter the world
of Yesterday, Tomorrow and Fantasy…
This message caught me by surprise and it basically prepares all visitors entering the wonderful world of Disney. 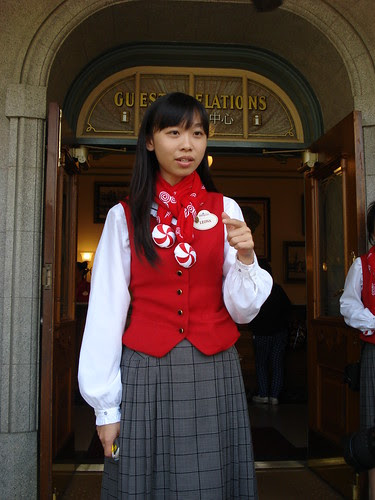 Meet Leona, she was our tour guide on the day we visited Hong Kong Disneyland. Her happy disposition was very contagious that you’d end up smiling and waving as you move on with the tour. 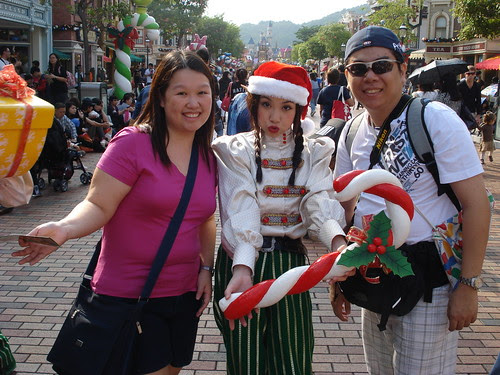 We met her at the Guest Relations Office and moved on to Main Street USA where we met cute Santa’s elves holding giant candy canes and were game enough to pose for a photo op. This section reminds us of photos of old New York with brick houses housing bakeries and photo shops for customers to visit. 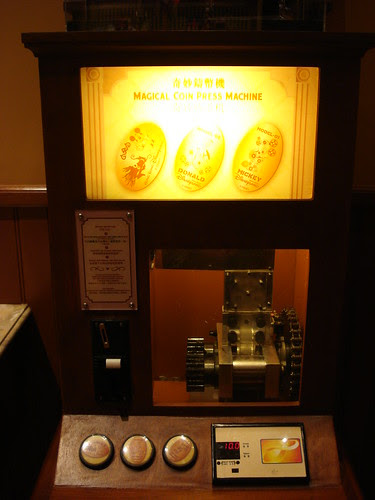 I love the Emporium where we found these coin pressing machines! Just put in a HKD $10 coin and out comes a flat oval coin bearing the image of a Disney character. We were later told that there are a lot of coin pressing machines scattered around the park but due to time constraints we contend ourselves with just one. 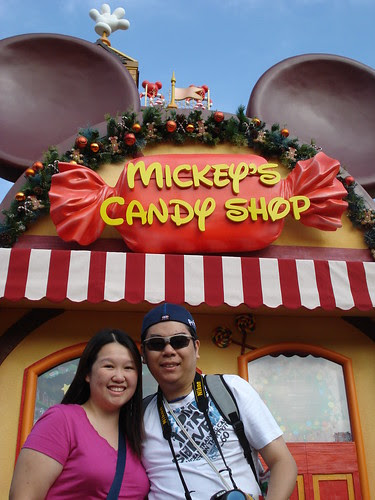 At the end of Main Street USA, we saw a number of Christmas Houses bearing the names of our favorite Disney Characters. Here we are posing in front of Mickey’s Candy Shop! I also saw the tree house of Chip and Dale, Minnie’s Boutique, bright pink houses of the Disney Princesses and that of Chef Donald’s. 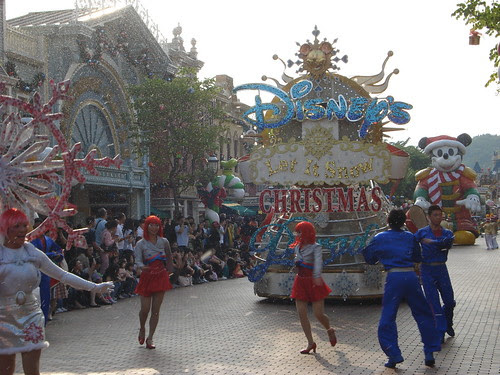 It’s also in Main Street USA where the Disney Parade takes place everyday at 3PM. This is definitely one show you CANNOT miss. We saw our favorite Disney characters on their respective floats pass by. It’s a perfect way to start your Disney adventure as you get re-acquainted with characters that you have grown up with. 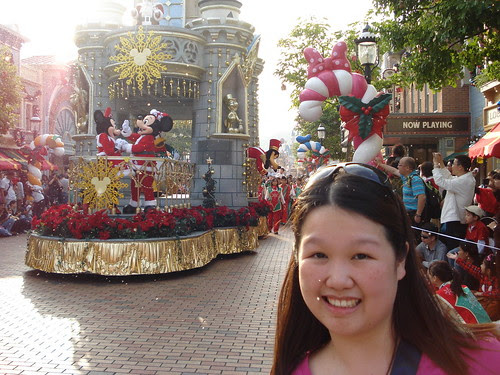 It was my first time in Disney and to be honest, I got a little teary-eyed perhaps due to extreme excitement as I saw Mickey, Minnie, Daisy and Donald pass by. 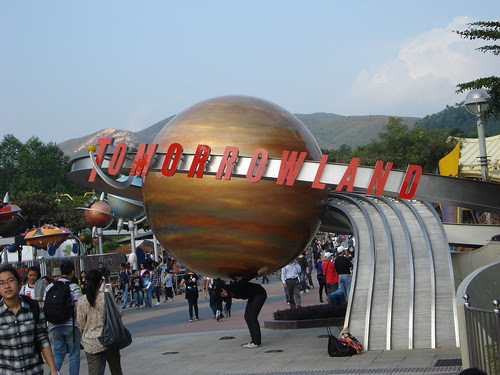 Tomorrowland has a number of attractions that is all about going outer space and meeting lovable Disney characters that are truly out of this world. 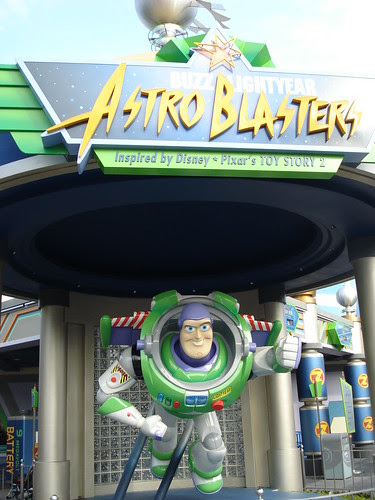 We tried the Buzz Lightyear Astro Blaster which I think my niece Julia will enjoy. All you have to do is to ride on a Star Cruiser and using a laser cannon blast enemy targets to earn more points. Paul was really good at hitting the target while I lag behind (well I was also busy taking photos during the ride). Other rides in Tomorrowland include the famous Space Mountain, Stitch Encounter, Paul’s favorite – Autopia and Orbitron. There are also gift carts around the park and this was where we got Julia a Woody doll for Christmas. :) 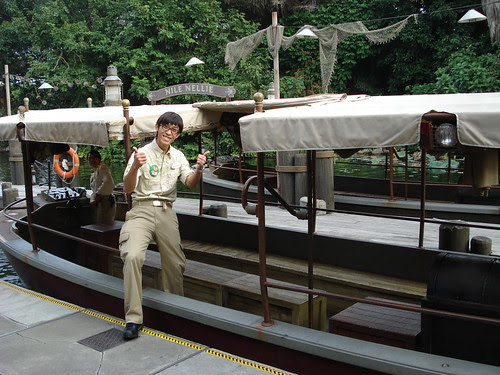 Moving on, we headed towards Adventureland where we were transported to the land of tall trees, sound of insects and monkeys and the whoosh of water rushing down the river stream. Our first stop was the Jungle River Cruise. On board, a very animated narrator guided us down the river where we saw replicas of wild animals. Watch out for the massive explosion somewhere along the way! 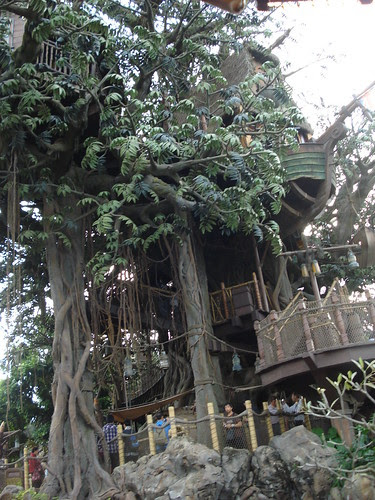 Adventureland also has the Tarzan Island where you can climb up Tarzan’s tree house and the Festival of the Lion King show.

I had enough adventure and I wanted something more mellow. Off we went to Fantasyland where Leona told us, the place where all your Disney dreams will come true. 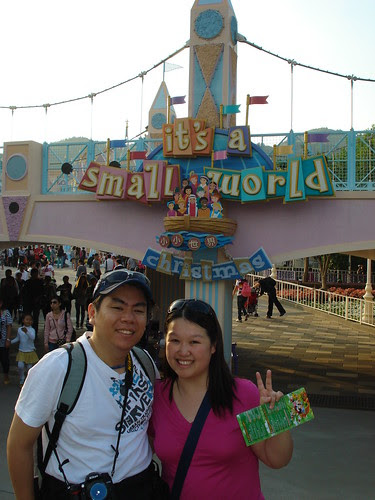 First stop was the It’s a Small World ride. We rode a small boat that literally took us around the world! Since it was already Christmas in Disneyland, the songs were Jingle Bells and It’s a Small World. There were a lot of pretty Christmas decors all throughout the ride and Disney character were also incorporated in their respective continents. 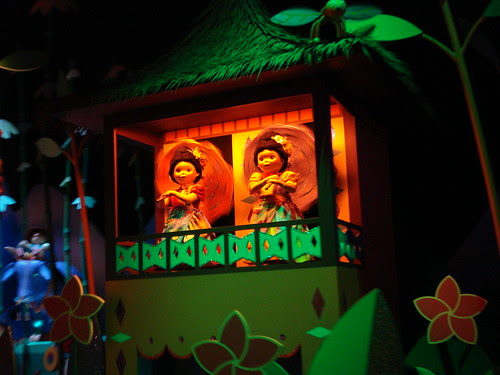 My favorite part was Asia, of course, we saw Filipina dolls singing It’s a Small World in Tagalog! I really enjoyed this ride and will make sure to do this again on my next visit. 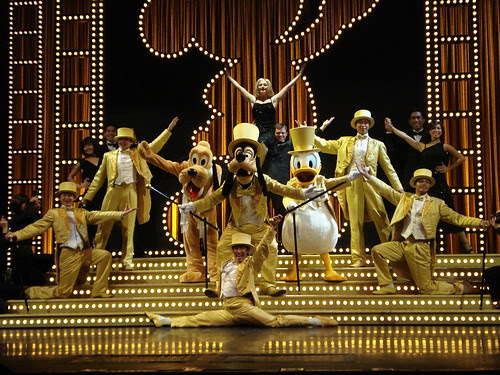 After the fun ride, we were off to the Disney Storybook Theater to watch the Golden Mickeys. This is like the Academy Awards – Disney style. We were entertained with Cantonese speaking Bebe, Mickey and Minnie, Donald and Goofy! They awarded different characters for specific categories under: Love, Fun, Courage and Friendship.

I watched with awe as Beauty danced with the Beast, Jessie and Woody performed a dance number and Mulan exhibited a number of exhilarating stunts. 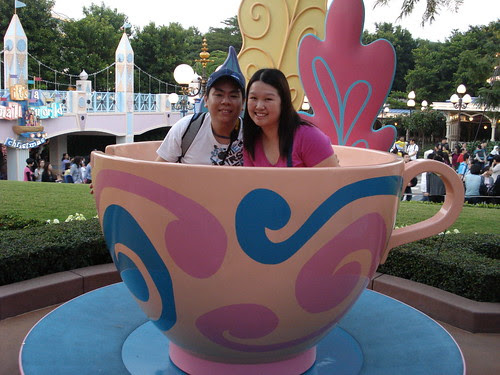 After the show, Leona bid us goodbye and this signaled the start of our free time around the park. First off was the Mad Hatter Tea Cups where we waited in line for a while to get on our pink tea cup that will take us around and around in tune with the funky music being played. There’s a steering wheel in the middle of the cup where you can turn it depending on how fast you want your tea cup to spin. 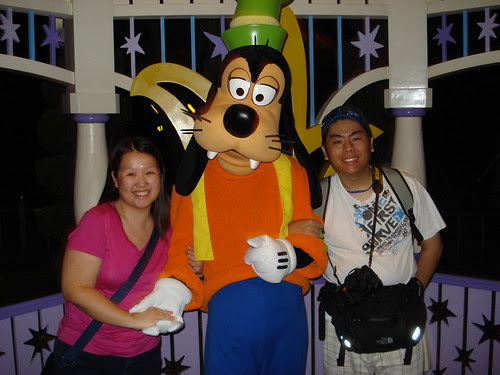 It was almost dark when we got off our tea cup and rushed towards the Fantasy Garden for our photo ops with our favorite Disney character. It’s amazing to see that my husband, who normally wouldn’t go with my wacky poses agreed to wait in line to have our photos taken with Mickey and Goofy. We would have loved to pose with other characters such as Winnie the Pooh, Minnie and Pluto but precious time was running out. We’ll save that on our next visit. Thanks to the FastPass that we were provided with, we headed towards The Many Adventures of Winnie the Pooh which is once again an interactive moving attraction. We hopped around like Tigger and entered Pooh’s honey sweet dreams while braving the storm that was about to arrive.

When in Disneyland, it’s best to get FastPasses for certain rides as this will allow you to enter the ride right away. It took us less than 5 minutes to enter and get seated with the help of the FastPass.

We were told that our dinner reservation was at 7 and with less than 30 minutes left, we agreed to just choose one more ride before calling it a day. Our choice went to the Mickey’s PhilharMagic after hearing raves about this from friends and relatives. It’s a 4D ride where all your senses will come alive as you listen to the beautiful Disney songs, watch Donald chase after Mickey’s magic stick and even catch a whiff of floral scent somewhere along the show. We left the theater with big smiles on our faces. It surely was a great choice for our last ride in Disneyland.

Our visit was very short and we promise to come back soon. On our next visit, we’ll make sure to ride Cinderella’s Carousel, Dumbo the Flying Elephant, the Fantasyland Railroad Train and visit Snow White’s Grotto.

For Toy Story fans out there, here’s some good news! Hong Kong Disneyland is actually expanding and come December 2011, a new section will open featuring your favorite stars of Toy Story. Learning about this, I immediately sent my sister-in-law a text message as I told her that they have to take Julia, a Toy Story fan, to Disney next year!

Aside from the Disney Parade, be sure to catch the 8PM Fireworks Display by Cinderella’s castle. It’s amazing to watch colorful fireworks light up the sky to the tune of Disney’s well-loved songs. Another heart-warming moment for me as they played A Whole to New and Part of your World as everyone ooh’d and ahh’d at the beautiful brightly lit sky. It was then when I realized that all your childhood dreams will definitely come true here at Disneyland.

It’s true when they say that Disneyland is the Happiest Place on Earth. For just one day, Paul and I were transported back to our happy childhood where we came face to face with our favorite Disney characters. It’s one place where you can push your adult worries aside and just enjoy to your heart’s delight.

We’ll definitely be back to more!

Read this to learn how to get to Hong Kong Disneyland