Agnes B. Cafe at the Eslite Mall in Taipei.

May 04, 2011
After visiting the Taipei 101, which is the second tallest tower in the world, little did I know that we were about to have a fashionable afternoon tea. It was starting to drizzle and with our legs starting to cramp up from too much walking, we decided to just look for a coffee shop at the nearby Eslite Mall. 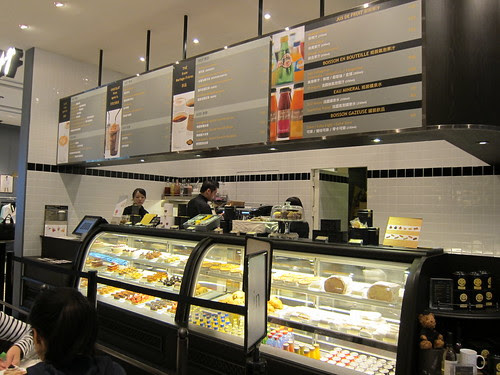 Arriving at the ground floor, my sister saw a cozy looking coffee shop and directed us there. It was an Agnes B. Cafe, one that Paul and I have been wanting to try out every time we're in Hong Kong. I'm so happy that Taiwan has this as well.

We probably all know Agnes B. for her pretty bags and dresses but this brand is also starting to gain popularity in the cafe scene. 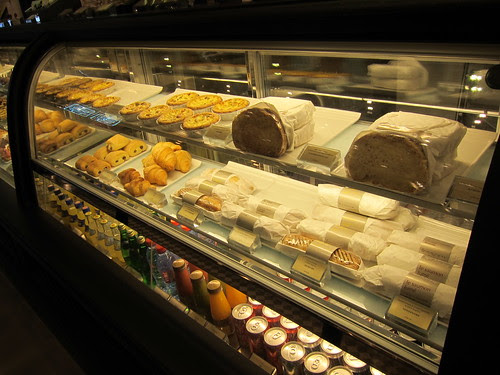 I love the sleek white and black interiors. Can you see how inviting the pastry shelf was? It really did pulled my sister and I closer until we couldn't resist leaving without ordering.

Paul simply wanted a cup of coffee while my sister and I couldn't stop starting at the sandwiches. Finally, we went for the Ham, Cherry Tomatoes and Caramelized Onions Toasted Sandwich (NT 120) and a piece of Quiche. 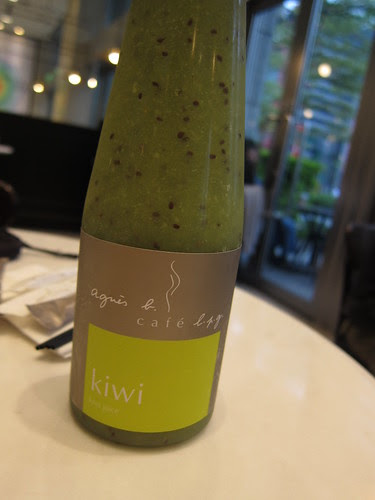 For my drink, I got a bottle of Kiwi Juice. I love how fresh it was that I can feel every tiny kiwi pulp in every gulp. How I wish I have bought more bottles to bring home. Tsk. Definitely no foresight that day. 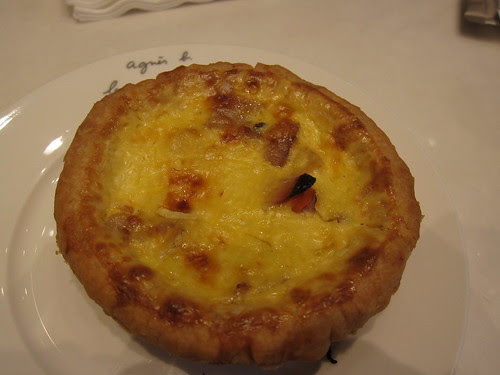 My first choice was the quiche and I was pretty happy with it. I love the flaky crust and the soft filling containing lots of eggs, cheese and sweet ham. We divided the quiche into three wherein we got a small piece each. 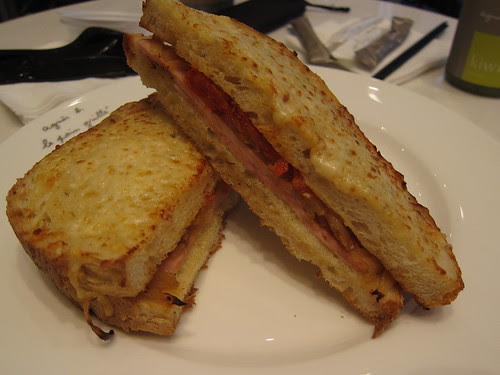 Initially, I was telling my sister not to get the sandwich because it sounded pretty ordinary. However, she really wanted to try it given that it had caramelized onions -- her favorite sandwich ingredient. Thus came the toasted sandwich which was covered with cheese. Once again, we split it into three and took our own small bites.

The verdict? I like it! Though I still prefer the quiche any day, the caramelized onions added that much needed character to what was supposed to be a typical ham sandwich. It makes for a perfect afternoon tea set.

We love the relaxed vibe at the Agnes B. Cafe. How I wish I've ordered a cup of tea and see if they have sugar cubes to go with it. Maybe next time. :)

Tip: Sit near the window for you to enjoy the beautiful view of the Taipei 101.

Agnes B. Cafe is located at the Eslite Xinyi Branch, Taipei, Taiwan.
How to get there: Take the MRT and get off at the Taipei City Hall Station.
afternoon snack afternoon tea agnes b cafe eslite bookstore fashion food kiwi juice quiche restaurant taipei taipei 101 taiwan taiwan. taipei where to eat in taiwan xinyi