May 06, 2011
One of our agenda as we were planning for our trip to Taiwan was to make sure that that our evenings are well-spent in various night markets scattered around Taipei. Reading up on Taiwan, we found out that there are a lot of night markets all over the country. It surely looks like everyone in Taiwan has an amazing gastronomical night life! This is one thing I was looking forward to and my excitement grows as the day gets nearer. 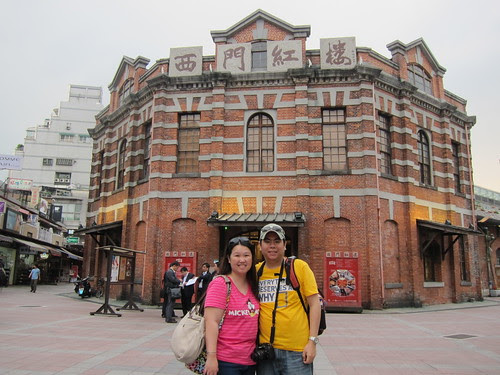 On our first night, we took the MRT from Danshui and headed to the Ximen Station. It was around 5PM when we got to Ximen and decided to check out the Red House which is just a few steps away from the MRT exit. This is an old market turned into a movie theater turned into a gallery/cafe/performance hall. It has been around for more than a century and still they have maintained the beautiful red exteriors that we saw up close. 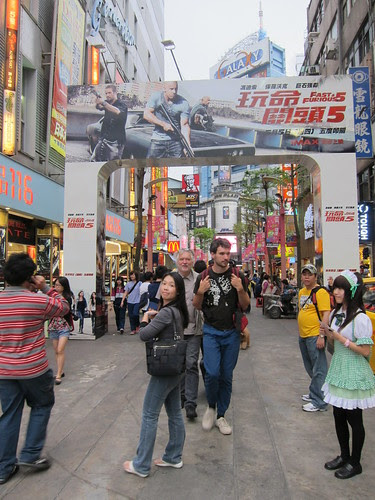 From The Red House, we crossed the street and followed the huge crowd towards the Ximending Night Market. Near this area is a very busy intersection that reminds me of a scene out of The Fast and the Furious: Tokyo Drift movie. No racing cars here though but busy people walking up and down the street. 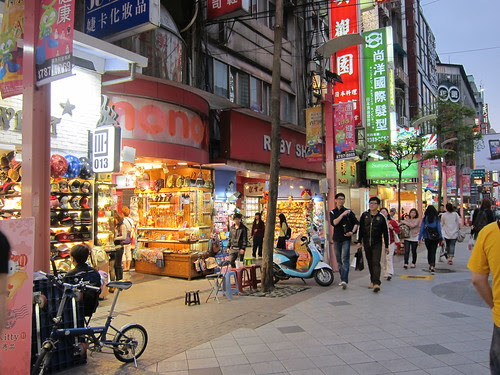 What I love about the Ximending Night Market is that they have closed a huge portion of the street from cars allowing shoppers and diners to safely roam around without fear of getting hit by a car. We began out journey down the main street where we saw familiar clothing brands such as Baleno and Hang Ten. They are all accessible from the ground floor and at the second floor are restaurants and coffee shops. They're plenty, believe me! I think I've lost count of the number of restaurants in this area.

However, we were there with one goal in mind -- to try the street foods that have made night markets oh, so popular. 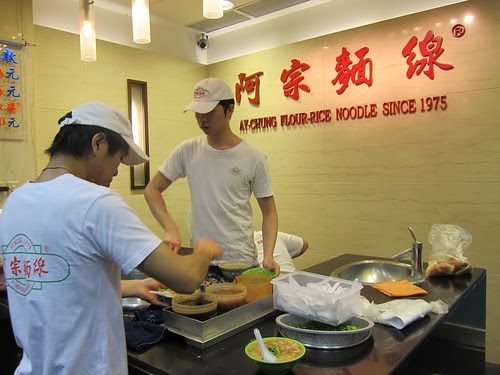 They have a simple store signage but you will definitely not miss this with the growing line that never seems to disappear and the big crowd of happy customers who are contented with their own bowls of misua (flour-rice noodles). No tables in this stall thus it's either you're lucky enough to grab a chair or you finish your bowl of misua standing up. 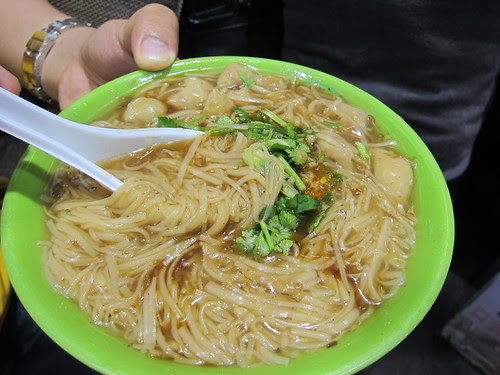 Paul and my sister quickly fell in line and got their own medium sized bowls of flour-rice noodles. It's mixed with intestines and a secret ingredient that has made my two companions so happy and satisfied after slurping their bowls clean. I took a small sip and found the mixture a bit too spicy for me. Brave souls can even add more condiments which is located in one corner of the stall. 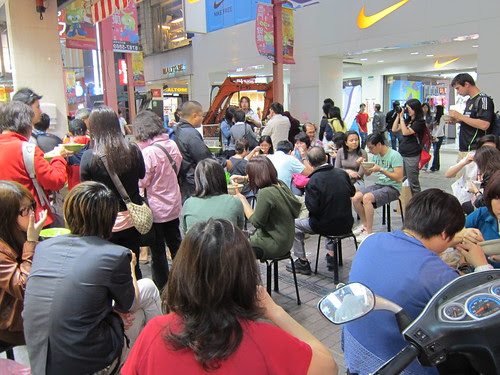 Everyone seemed to love this so much that even some fellow foreigners like ourselves were spotted enjoying their own bowl as well. 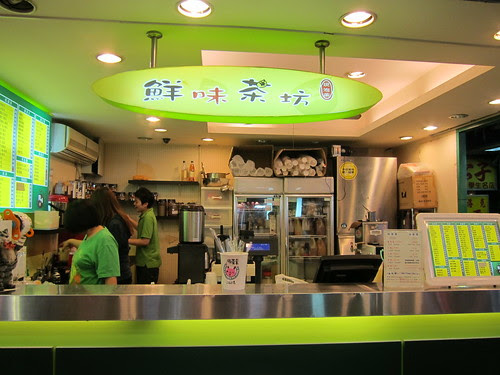 After burning my throat from the spicy misua soup, I went to the next door neighbor of Ay-Chung and was glad to see that they sell milk tea. The menu was in Chinese but luckily my very elementary Mandarin was not entirely useless as I told the girl I wanted "Pa po nai cha" (Pearl Milk tea). Lo and behold, she understood me and proceeded by asking for my preferred sugar and ice level.

There was only one size for all milk teas which is probably the equivalent of our large cup here in Manila. I was so excited as this was my first milk tea in Taiwan and I have been looking forward to this day wherein I'll be able to try authentic milk tea from the country that does it best. 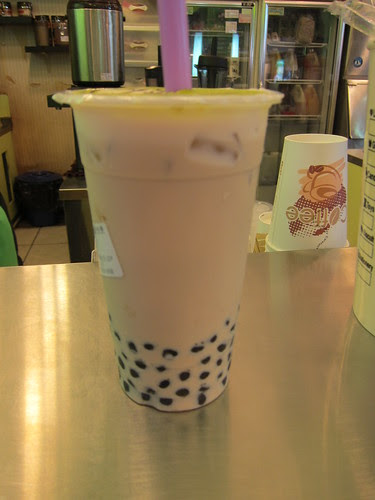 Service was quick despite having to attend to a number of customers at the same time. I love how fast and efficient they work! I took a sip from my cup of Pearl Milktea and I loved it! It wasn't too sweet, nor did it taste watered down. It surely was a good start for my milk tea journey. 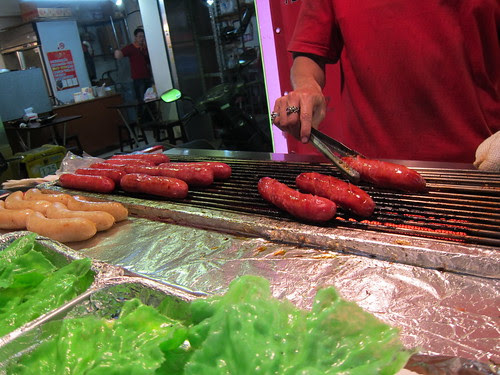 With Paul and my sister satisfied with their flour-rice noodle soup and me happily sipping on my milk tea, we decided to cap our XiMenDing visit with a stick of Taiwanese sausage each.

With his happy disposition, the sausage vendor tried to create a conversation with us but his little English know-how and our poor Mandarin skills, we really didn't get that far from telling him where we came from and how long we'll be staying in Taiwan. Poor guy, he really wanted to entertain us but language barrier got in the way.

On to the sausage, I love how it was perfectly grilled. He really took his time to carefully cook our sausage making sure it stays juicy and sweet. I wasn't able to ask him how long he has been selling but maybe I will on my next return. Next time you're in Taiwan, be sure to look for him and try his delicious Taiwanese sausage. A visit to Taiwan is not complete without this, believe me. 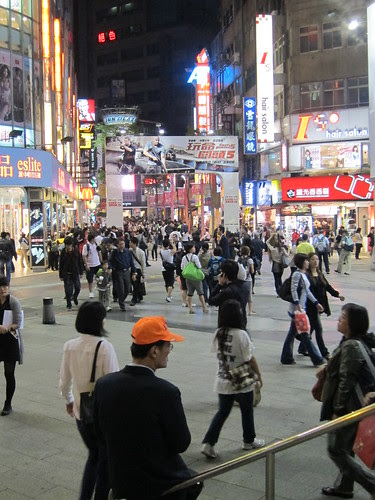 I love the youthful happy vibe of XiMenDing Night Market. Despite being a weeknight, there were a lot of students and yuppies hanging out and unwinding after their busy day. It's also here where you can find Mala Hotpot, where I had a fantastic time despite the two-hour limit.