July 07, 2011
I can't believe it has been almost a year since Paul and I flew to Singapore then to Malaysia for our 2-week long Honeymoon. I remembered being welcomed by our friend HK who took us on a fun food trip around the Tekka Market where I had the best tasting Lamb Briyani and later we dined at a Nonya Restaurant where it was my first time to try this type of cuisine. I knew from that point on that our honeymoon will truly be a gastronomical trip. 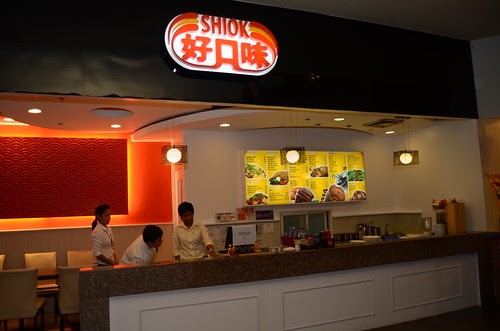 As we get closer to celebrating our first wedding anniversary, Paul and I were invited to a food tasting at Shiok where we relived the fun eating moments that we both had during our Honeymoon. We met Chefs Nicco and Denny who are both owners of the restaurant. They first opened a branch at the Fort Bonifacio and lucky for us Greenhills loyal visitors, they now have their second branch at the food court of Greenhills Promenade.

Initially, I thought Shiok means "cheap" as directly translated in Hokkien. It was only after meeting them that I found out that it means "delicious" in Singaporean slang. The logo looks quite familiar which I later realized is closely similar to that of Hong Kong's Cafe de Coral.

We had the chance to try more than 14 items and boy we were so full after! Let me share with you some of my favorite dishes and these are the ones that I will surely go back to Shiok for: 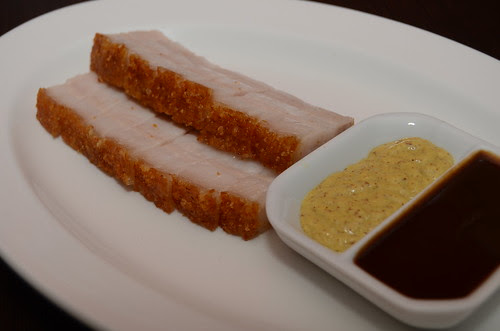 Crispy Pork (Php. 180)
Everyone loves Lechon Macau most especially when the restaurant can successfully make the skin extra crunchy and the meat tender. Others would prefer to dip this in Hoisin Sauce but I love it with a thin layer of mustard. How I wish though that Shiok can lessen the fat and have more meat. 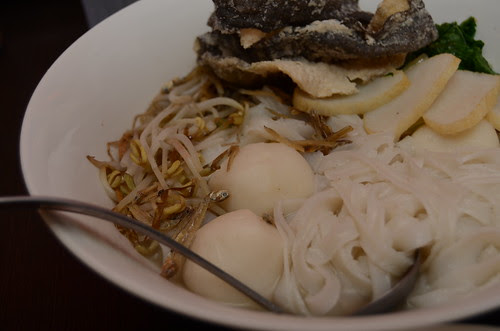 Fishball Kway Teow (Php. 185)
It was a rainy evening and I'm glad that we had a bowl of warm soup each. While I find the soup a bit too bland for my taste, I enjoyed the rice noodles served with Singaporean fishballs, bean sprouts, ikan bilis and fish cake. 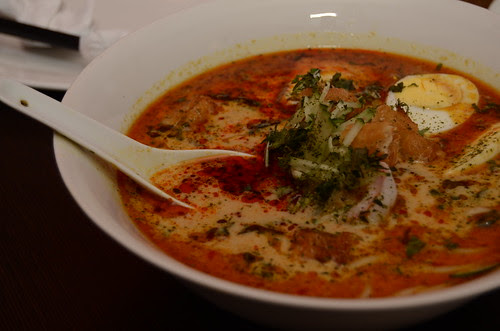 Nonya Laksa (Php. 325)
Paul, on the other hand, had the spicy laksa and he told me it was really spicy. I wonder how come it's priced almost double of the Fishball Kway Teow, could it be because of the shrimps included in the soup? 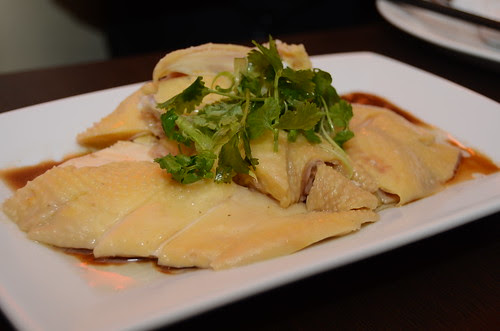 Premium Hainanese Chicken
As this was served on our table, we were told that they have two types of Hainanese Chicken -- a premium (imported) kind and a local version. We were able to try both and of course, everyone loved the Premium Hainanese Chicken more as the meat was more tender and for some reason it was extra flavorful that I didn't even have to use the dipping sauces that much. This was a sure winner as you can pair it with soup and Hainanese rice. 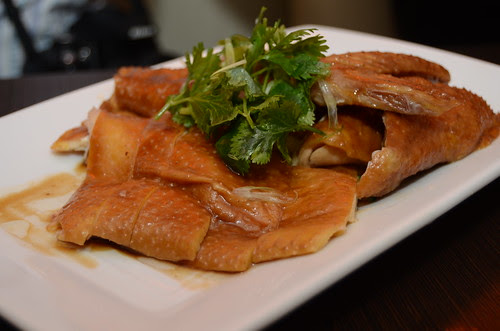 Premium Soy Chicken
The Soy chicken was also very yummy. It wasn't too salty and the chicken was very tender with just a small piece of fat in every cut. 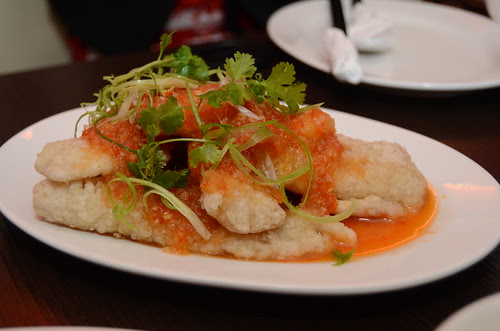 Spicy Pineapple Fish (Php. 150)
I love fish and I enjoyed this dish very much. I think among all the dishes that were served that evening, I loved the two fish dishes the most. This one had breaded fish fillet served with a special Singaporean Pineapple Chili Sauce. Surprisingly, it was not spicy at all! Instead, I enjoyed the sweet-sour notes which probably came from pineapple. Yum! 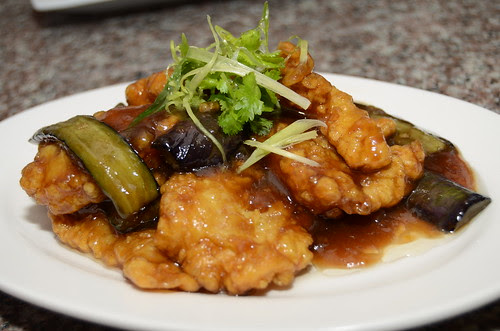 Fried Fish with Eggplant (Php. 180)
Another favorite of mine! This time it is a bit more salty compared to the Spicy Pineapple Fish but I enjoyed the same tender fish fillet where each slice was big enough making it worth the P180 price tag. Delicious!! I also made sure to mix some of the sauce into my rice. You'll forget your rice diet just for that meal as it will make you want more! 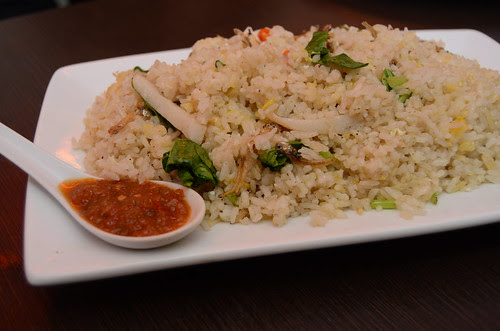 Nasi Goreng Ikan Bilis
As you read through my blog, you will surely notice how much I loveeeeee fried rice. Nothing makes my meal more special than a plate of perfectly cooked fried rice. This is not part of Shiok's menu board so I guess they will be introducing this pretty soon, I loved this rice dish with bits of dilis (anchovy), mint leaves and spicy Malaysian sauce. Definitely a must-try!

Then here comes the spicy stuff! 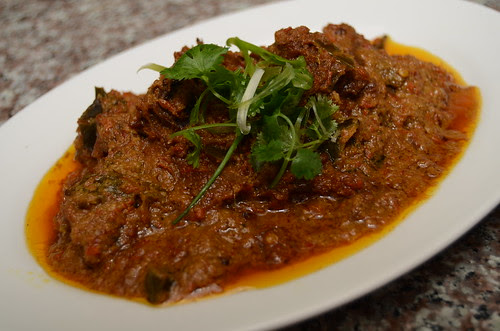 Beef Rendang (Php. 345)
If there's one thing that I remember the most about Malaysia, it would definitely be their Beef Rendang. I guess this is the ultimate test for a restaurant when checking for their authenticity. If we would judge a Japanese restaurant by the quality of their Tamago Sashimi and Tempura or a Chinese restaurant for their Sweet and Sour Pork, then this would be the best gauge for a Malaysian restaurant.

So how did Shiok fared?

At first bite, I noted how tender the beef was which was a good sign. The sauce was rich as it was cooked with coconut cream and chili. However, I find it very spicy that I can only take in one bite and I quickly raised the white flag. It was fiery hot that my poor taste buds immediately went up in flames. 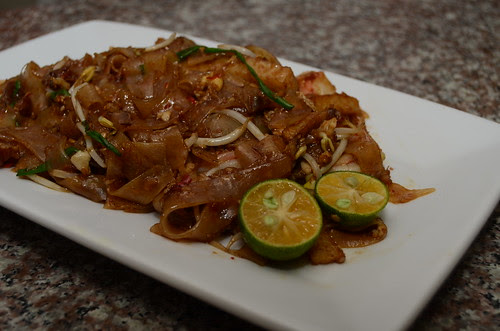 Char Kwey Teow (Php. 160)
A favorite Singaporean dish of mine. As you may have noticed, I love flat rice noodles and this is one thing that I always make sure to order when dining at a Singaporean Hawker Center. I was surprised though that Shiok's version was spicy too. A few notches below the spiciness of the Beef Rendang but still spicy enough to make you sweat a bit. It was pretty flavorful though that I pushed myself to finish my small serving as I enjoyed the prawns, fish cake slices and veggies. 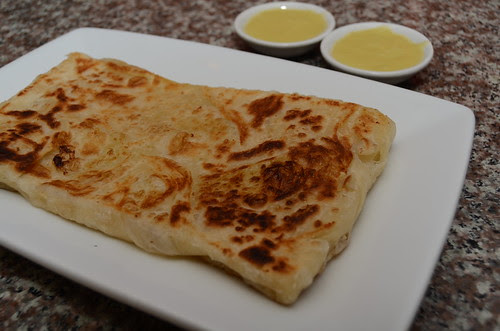 I could hardly take in another bite at this point, I was pretty satisfied with the dishes that were served to us. Of course, for the owners of Shiok, they can't just end the meal right there -- we just have to have dessert! Two desserts were served: Pisang Goreng which are banana fritters with swirls of gula melaka, a scoop of ice cream and milo (yes! you read that right) powder. We also had the Roti Kaya which is the traditional roti prata filled with their very own kaya jam. It had a sweet coconut-y flavor that wasn't too sweet at all. My dear fellow blogger Rowena enjoyed this very much. This is a good indication that the Roti Kaya was not too sweet as Ro is the type of girl who would order zero sugar with her milk tea.

It was a fun night spent with fellow members of The Foodie Club. Shiok actually took the place of Coco Asian Kitchen who also invited The Foodie Club to dine there not so long ago.