Back in 1941, a mother of 5 named Rosa Francisco opened a small panciteria in Pasig. She named it Three Sisters' after (make a wild guess!) a talcum product that she just heard over the radio. On her first day, church-goers flocked to her panciteria and continued to go back from that day on. Sadly, World War II broke out and the family was forced to head to Antipolo to seek for safety and shelter. After the war, Rosa went back and found that her panciteria has been burned down. Still, with much determination, she rebuilt and re-opened her panciteria to the public. Soon, she has regained her loyal patrons and have acquired new ones. People would visit Three Sisters' Refreshment Parlor for their halo-halo and noodle dishes.

Fast forward to 1970, Rosa Francisco decided to relocate her panciteria to its present site in Kapitolyo, Pasig. This time she has renamed it: Three Sisters' Restaurant of Pasig. Given the bigger space, more and more visitors would drive all the way to her restaurant just to enjoy her specialty dishes. It has been a popular lunch destination not only for workers in Pasig but also those from Mandaluyong and even those working as far as Makati.... It has been 70 years since Rosa Francisco first opened her restaurant yet the charm of Three Sisters' continues to shine brightly through these years..

Now the question here is, why on earth did it take me this long to discover Three Sisters' and to finally try her best-selling Pork BBQ and Pancit Bihon? The funny thing is it's actually just a few blocks away from my office and all these time I failed to take notice of this busy eatery along Bo. Kapitolyo. Had it not been for our friends Richard and Irene who told us about this neighborhood discovery, it wouldn't have probably prompted Paul and I to set an impromptu lunch date to try Three Sisters' out. 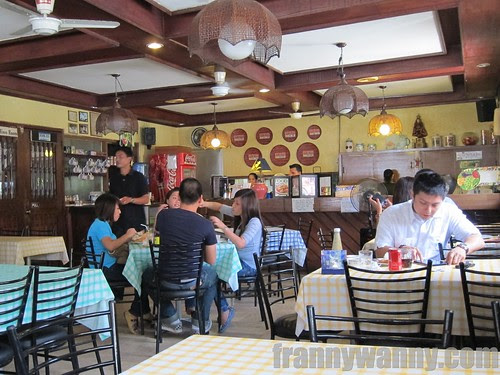 As we entered Three Sisters' the place was half filled, yet it was pretty easy for me to find a table by the window as I want to make the most of the natural lighting for my photos. The menu was simple, laminated and printed back to back we quickly browsed through the list but in our minds we knew pretty much what to order. 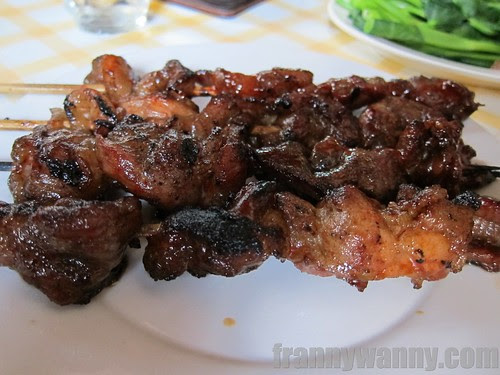 Of course, we had to get some Pork BBQ (Php. 35/piece). Big chunks of tender pork meat brushed with their homemade sauce which was pretty sweet just the way I liked it. It was easy to pull out from the stick without making a mess on my plate. I enjoyed the barbecue immensely even if I have to cut out a few pieces of fat out which was included in the stick. 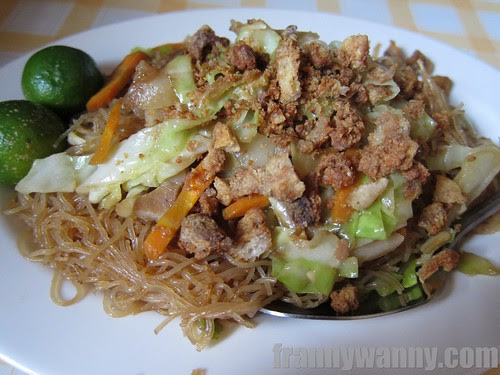 My friend Irene is a great cook and she got an amazing taste in food thus when she raved about Three Sisters' Pancit Bihon (Php. 80), Paul and I knew that we have to give it a try. The serving for the pancit bihon was pretty generous! Topped with cabbage, carrots and pork cracklings (chicharon), it was, as Irene has described it to be, delicious. However, I prefer my noodles long and not cut up into bite-sized portions as how it was served at Three Sisters'. Paul seemed to have liked it as he has managed to finished the entire plate of noodles on his own. 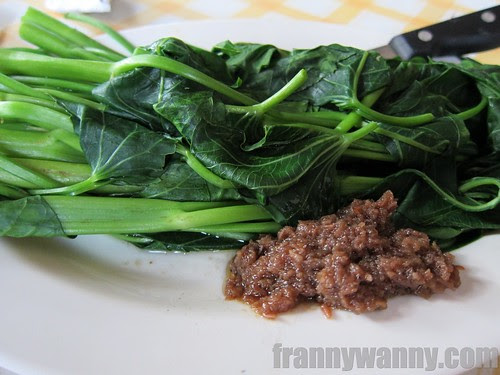 We also tried the Steamed Kangkong with Bagoong (Php. 70). This was Paul's pick and while ordering, he failed to notice the word "steamed" and was actually expecting sauteed kangkong with shrimp paste. He was surprised that what was served were long strips of river spinach (kangkong), a sharp knife and a spoonful of shrimp paste. It was quite funny actually but we just made do with what we have. The veggies were not so bad, true it was quite bland but the salty bagoong truly made up for it. I also feel very healthy for having steamed kangkong over the sauteed type.

Given how close it is to my office, now I know where I can order when my birthday comes along and I'd like to treat my colleagues to some Pork BBQ and noodles. 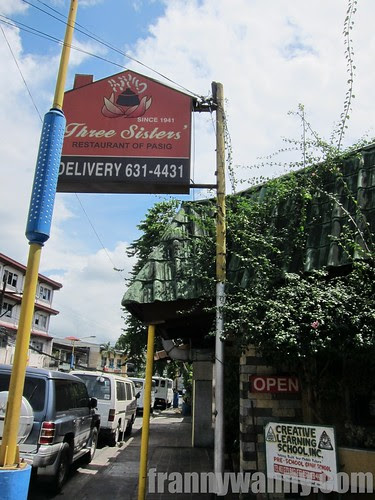 Three Sisters' is considered an institution here in Pasig and with its delicious Pork BBQ and other dishes, I'm sure it will continue to last for a long long time.