A grew up thinking that eating ice cream is only suitable during the summer months. When the temperature is at its all time high and nothing sounds better than indulging in a cold cup of creamy goodness to beat the heat. It was until I learned that ice cream can also be taken in the cold winter nights to help your body release more heat to combat the..cold! It may take a while for this fact to make sense but I tried it when it was shivering cold in Seoul, Korea last April and true enough, it made my heart tremble less and my body somehow was able to produce more heat. This now gives all ice cream lovers out there the reason to enjoy their favourite cold scoop at any given time of the day, month or year!

Over the weekend, Paul and I visited SM North EDSA to check out a cute sky blue ice cream cart called Picket Fence! Being big ice cream fans, we got word that this is really good stuff thus we know we can’t pass up on the opportunity to try it ourselves. Taking a closer look, we found out that Picket Fence sells imported ice cream from Australia. To localize it, they have renamed the flavours based on the names of each of their family members. There’s Mei Mei Mint, Koko Coffee, Wordy’s White Chocolate and Tiffy Strawberry to name a few. At present they have around 10 flavours available and we were able to sample most of them. 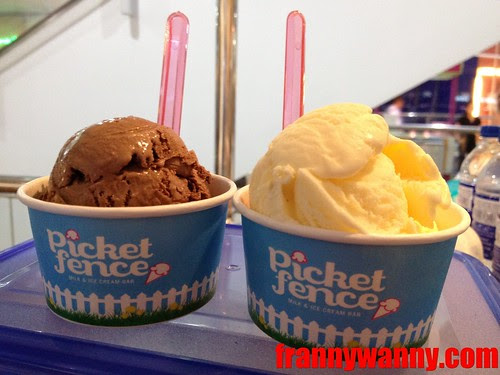 Finally, after a round of tasting, Paul chose the Mimi Milk Chocolate which he said had a really rich milk chocolate flavour which will surely please all choco lovers out there. It’s silky and creamy just the way he likes it. I think it would also make a great milkshake too! 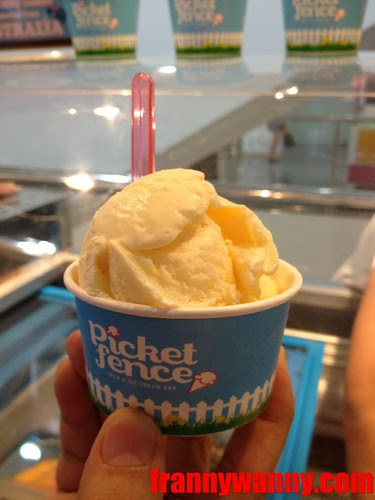 I, on the other hand, I went for the Delle Macadamia which is part of their Kikay Barkada line as these are named after the famous DJs of RX 93.1 Delamar, Chico and Gino! I love The Morning Rush as I’ve been listening to both Chico and Delamar since I was in High School.

Going back to the ice cream, It was love at first bite! I always prefer chunky ice cream over the smooth ones thus I enjoyed chewing on the macadamia pieces while enjoying the vanilla based ice cream too. I finished my cup of ice cream in no time and wished that they sell in pints for me to bring home to enjoy some more!