October 26, 2012
Our recent trip to Korea wasn't just devoted to eating. Aside from nourishing our tummies, we also nourished our minds. It's also perfect that we had three young kids with us and I believe taking them to places such as this will allow them to have a better idea of Korea's history and to see what life was back then. After all, traveling should also be educational. 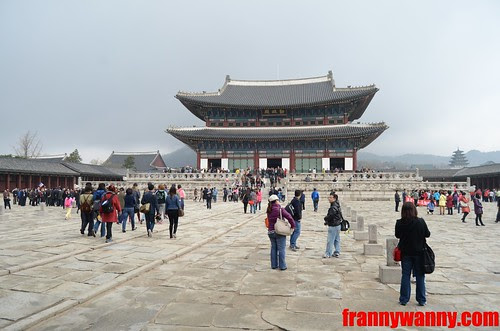 True, I'm the type of traveler who wants to have a good mix of cultural immersion while enjoy the fun cosmopolitan life of a particular travel destination however most of my trips just lasts a week and with all the sights and places that we have to visit, I have to be wise and to choice the best spots instead of boring myself out by visiting them all. Don't get me wrong, I do appreciate the history and the culture but at some point, I feel that you see one __________ (fill this in with palace/temple/mountain/ruins), you've seen them all! There are actually a lot of palaces in Korea but our group decided to go visit the first-built which incidentally is also the biggest one called the Gyeongbokgung Palace. 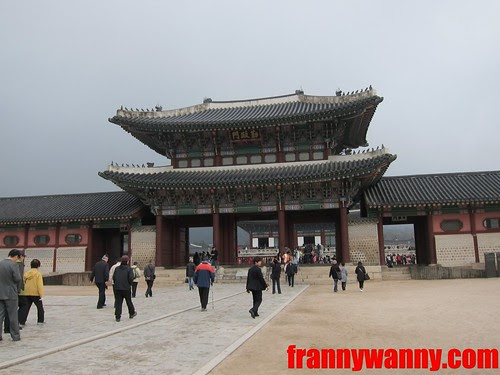 Constructed sometime in the 14th century, the Gyeongbokgung Palace used to be the residence of the former king and his closest family members. This was also where some palace officials hold office. The palace has withstood the test of time. Going through war which eventually had some of the buildings burned down to a reconstruction, the murder of the queen during the 1800 and a lot more trials and changes up until the 21st century. 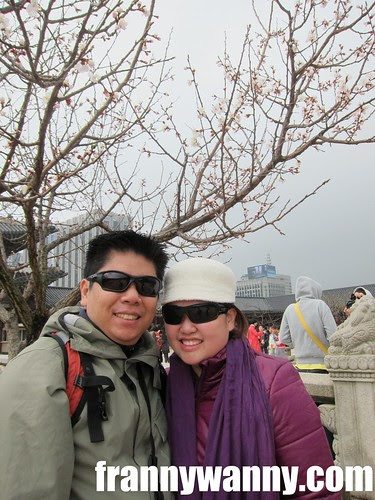 Today, the Gyeongbokgung Palace is one of the must-visit sites for tourists visiting Seoul, Korea. Getting there is so easy as there's a subway station (Gyeongbokgung) just right below it. Be ready though to walk as one building is quite far from the other. We enjoyed the long walk though as we admired the Cherry Blossom trees, a pond in the middle of the entire compound and sculptures along the way. Visiting the Gyeongbokgung Palace reminded me of one of my favorite Korean series -- Jewel in the Palace. I love the intricate details which are found in each building. If only my feet/legs were not killing me that day, I would have probably stayed longer. The structure is very similar to The Forbidden City in Beijing, China where the main halls are lined up in the middle and there are smaller buildings beside it. I actually visited the Gyeongbokgung Palace a week before I went to The Forbidden City and the similarity continues to amaze me.

There's an entrance to go and explore the full vicinity of the palace. A ticket costs W3,000 (Php. 113) for adults and since there were more than 10 of us in the group, our tickets were discounted costing only W2,400 (Php. 90) each. Kids rate is half of the adult ticket rate. There are also guided tours available. Silly us, we only knew about this on our way out.

I highly recommend that you spend at least half a day enriching yourself with Korea's colorful history by visiting the Gyeongbokgung Palace.

Gyeongbokgung Palace is located at 22 Sajingno, Jongno-gu, Seoul 110-050. To get there take the subway and exit at the Gyeongbokgung Station. You may also take bus numbers 0212, 1020, 1711, 7016, 7022. Visit www.royalpalace.go.kr for more details.
asia gyeongbokgung palace history korea palace royalties seoul south korea tourist spot travel itinerary what to do in korea where to go in korea